The tempting aroma of traditional Sunday roasts assaulted my senses as we set off for yet another trek to the Theatre of Hope. The Happy Chocker was on board as I set the virtual sat nav to LS11 0ES and put the car on auto pilot for the short trip to Leeds. Lee Clark's Birmingham City were today's visitors with the ex Huddersfield boss's cheery personality being severely tested with his team's recent away form. It's that bad it's even worse than ours having lost on their last four league road trips. The fact that a certain Mr Zigic plies his trade for the Blues was enough to send a cold chill of reality through the pre match discussions though. He always scores at least once against us. Add that to the fact that the West Midlands side were seeking their 6th consecutive league victory against the once mighty whites and there wasn't a great deal of optimism filling the car as we entered Elland Road.

With recent disappointing results all too raw in the memory Brian McD's selection for today's game was always going to be difficult. Diouf was on compassionate leave but would Byram get a start? What about Murphy and Wootton and would today be the day Hunt scored? We waited with baited breath for the team sheet to be announced.  When it was there were veritable gasps of surprise from the faithful home fans in a crowd of 21,000.  Three centre backs and two wing backs were clearly on the team sheet. Brian McD had bravely gone for broke with his selection bringing Wootton, Smith, Murphy and Byram back into the starting line up to facilitate a 3-5-2 formation. Wow! This should be interesting. I hurriedly placed an outrageous wager on a 4.1 victory for the mighty whites and scuttled to my seat.

Before the game the Chief, Lucas Radebe, was introduced to a misty eyed crowd who gave him a standing ovation. "Hope he's brought his boots" I suggested to HC. Bright sunshine smiled down on Elland Road as the game got under way. Lees, Pearce and Wootton formed the back three and immediately settled into their new roles as if they'd played that system all their life and with Murphy and Mowatt settling deep in front of them allowing Austin to motor on forward as Leeds opened brightly. Warnock and Byram were soon hurtling up and down the flanks giving Ross Mac and Smith plenty of ammunition to pepper a very hesitant Blues back line. This was a very unusual start for Leeds as they took up the early dominance.

Ross Mac benefited from an awful mistake by the Birmingham centre half and found himself one on one with Randolph in the Blue's goal but planted his shot straight at him.  Next Pearce was on the end of a teasing cross which he should have buried from 6 yards quickly followed by another save from Randolph as Ross Mac broke free from his lumbering marker. All this and the game was only ten minutes old. Shots were raining in on the visitor's goal as Leeds dismissed their recent poor form to the dustbin with some lovely football.  What a difference from the woeful showings at Derby and Millwall. 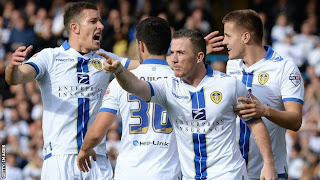 Leeds' pressure finally told after 18 minutes when Ross Mac coolly converted a chance after some comic defending from the Brum defence and goalkeeper Randolph who was left literally hopping mad as the Scot swept the ball into the empty net. 1.0 Leeds and credit to Ross Mac for keeping going after missing two glorious chances earlier in the match. The goal inspired Leeds who were gaining a real stranglehold on the game.  Murphy and Mowatt were dominating in midfield with Austin revelling in the freedom his more advanced position gave him.  At the back the 3 centre backs were snapping at the heels of any attacker who came near them whilst Byram and Warnock were making intelligent runs down the flanks. Paddy Kenny was a virtual spectator as Leeds put the Blues to the sword. Lee Clark cut a very lonely figure in the technical area as his demonic gesticulations had no affect on his team. 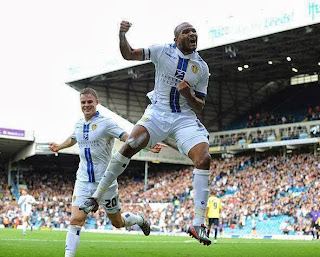 Birmingham did have the ball in the net from Novak but he was offside before Burke wasted a good chance after Mowatt's poor clearance.  Wootton seemed to have the measure of his highly rated ex colleague Lingard as Leeds powered on. The inevitable 2nd goal came on 33 minutes when excellent running from Ross Mac made space on the left for him to launch a pin point cross onto the head of the rejuvenated Austin who steered the ball home. 2.0 to Leeds and the home side were in overdrive. Unbelievable? After all the doom and gloom of recent weeks here was a Leeds team giving an admittedly poor Birmingham side a proper spanking.

At 2.0 Leeds weren't entertaining any ideas of taking their foot off the accelerator as they went for the Birmingham jugular and their efforts were rewarded just before half time as big Matt Smith stroked home the 3rd goal after Randolph had saved a Ross Mac shot. 3.0 Leeds at Half Time! The urinal philosophers were buzzing. Everyone had smiles from ear to ear as they dissected as good a 45 minutes seen at Elland Road for a long time.  In fact the only dispute was when we had last been 3 up at half time. Nobody knew. One particularly difficult to please fan reminded us that "We were once 4.1 up and lost 6.4 not so long ago" I couldn't see that happening though as I checked by betting slip.  A 4.1 win would return the princely sum of £85 to my coffers.  Mmmmm still possible?

The ominous and unmistakable figure of Mr Zigic appeared at the start of the 2nd half. "Hope he doesn't get 4 again" commented a nervous fan. Birmingham stuttered into life with their substitutes giving them a spark of hope but still Mr Kenny had little in the way of shots to deal with as Lee Clark's charges sort an unlikely comeback.  Tom Lees made a fantastic headed clearance to keep the three goal advantage before Kenny tipped over a stunning drive from who else but Zigic. At the other end Randolph was doing his level best to keep the score respectable as he made fine saves from first Austin and then a Smith header that he acrobatically tipped over the bar.  Leeds weren't to be denied though as Smith's next header from an exquisite Mowatt cross was unstoppable. 4.0 Leeds and suddenly missing a good old fashioned Sunday roast and Yorkshire Puds seemed a minor inconvenience to witness the mighty whites in this form. Ironic cheers of "what the f*** is going on" tumbled down from the kop as the home fans basked in the rare occurrence of a comfortable home victory.

I was now left with a dilemma as Brum pushed on for a consolation goal that would have seen me £85 to the good. Do I cheer if they score? Well thankfully they didn't and Leeds finished well deserved winners over a poor Birmingham side. Austin was my man of the match for an impressive showing playing in an advanced role but in truth this was a sterling performance from the whole team from back to front. Smith was a handful all afternoon and his two goals showed promise of more to come. Byram looked back to full fitness and Mowatt again purred through the game like a veteran. All in all an excellent performance. Much credit to Brian McD though for his astute change of tactics.

Lots of smiling faces adorned the usually craggy features of Leeds fans streaming away from Elland Road. We're not used to this type of domination from the mighty whites but it is something we could get used to.  Was this a flash in the pan or a seminal turning point of a testing season? Time will tell starting at Huddersfield next Saturday lunchtime. One thing for sure.................