At times Football logic is unfathomable. Despite Leeds' somewhat erratic and at times woeful away form I was full of expectation and hope as I clambered aboard the London bound train at a crisp and sunny Selby station. Yet another awayday following the once mighty whites was underway and nothing was going to get in the way of a bit of pre match positiveness. The Happy Chocker and the Quiet One had a little less optimism though.  Never mind a bit of essential match day lubrication would soon sort that out.

By the time we got to London the party spirit was somewhat dampened at the Barrowboy and Bank pub at London Bridge as news filtered through of not one but two pitch inspections at the Valley due to a waterlogged pitch. Bollox this is a long way to come for the match to be called off just because Charlton can't sort the drainage on their pitch out. Finally the game was given the go ahead with a 30 minute delay to the kick off. Phew.....just time for another pint before the game then. The team news declared starting spots for Pugh, Blackstock and Brown. Mmmmm this could be a bit of a backs to the wall game I mused noting that Charlton hadn't conceded a goal in the last 7 hours of play. 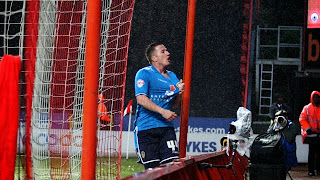 The atmosphere in the damp Valley was electric as the game got underway on a very dubious pitch that still had water standing on the surface. This wasn't going to be a game for pretty one touch football and Leeds soon made their no nonsense style clear as any ball in their last third was swiftly dispatched away from goal. Paddy was not going to get any pass backs today. Charlton opted for a more fluid approach as they tried to keep the ball on the floor but the inconsistent surface hampered their progress. Leeds were playing towards the packed away end and sent the travelling hordes into ecstasy with their first real attack on 17 minutes. Blackstock climbed high to knock down the ball into the path of Ross Mac who expertly steered the ball past Hamer and into the net. Get in! 1.0 Leeds.

Pugh settled into the left wing back role as if he'd played there for years and Michael Brown revelled in the greasy conditions as Leeds dug into protect their slender lead. The referee managed to upset both sets of fans with some odd decisions which saw both Blackstock and Paddy Kenny receive yellow cards for innocuous discretion's whilst the home fans were clamouring for a penalty when a Charlton forward fell like a dying Swan in the Leeds box. Paddy Kenny showed just why he is rated as the best keeper in the division when he pull off a point blank save to keep Leeds' sheet pristinely clean as Charlton applied pressure as half time approached. Then just when it looked as if Leeds would hold out until the break they were stunned by a volley straight out of the top drawer from Cameron Stewart who pulled the Addicks level. 1.1 and HT.

The chaotic half time toilet run brought a few harsh comments on Leeds first half performance. I actually thought they were playing the conditions reasonably well. The back three were looking solid, Ross Mac and Blackstock looked dangerous up front and the midfield were gamely battling with both the opposition and the pitch. 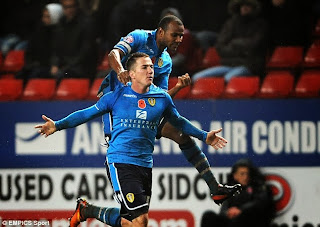 The second half had only just got under way when Leeds regained the Leeds. Once again it was Ross Mac who scored as he converted a penalty after Pugh had been felled in the box by a desperate Charlton tackle. Not sure many home fans saw it that way though as they were still smarting from not getting their own penalty shout. 2.1 Leeds. The goal spurred Charlton on as they looked for a second equaliser. Lees, Pearce and now Zakiulas were meaning the ramparts at the back after Wootton had gone off injured. Brian McD's tactics seemed to be working as they held a solid back line and when given the chance broke quickly. Austin so nearly increased the lead after he latched onto a Ross Mac through ball. Maybe we might just hold onto this lead?

I had a sneaky look at the clock on the scoreboard. 69 Minutes gone. "We might just do this" I confidently announced to HC. Cue a bit of mess up by Lees and Zakiulas allowing Church to cross for Jackson to slide the ball past Kenny. 2.2 and all of a sudden things were looking ominous for the mighty whites!

Brian McD's teams are made of stern stuff though and they stuck doggedly to the game plan by continuing to only play in the last third of the Charlton field. Finger nails were beginning to disappear as nerves took a grip on the 3,200 travelling fans though...............come on down Ross McCormack. Once again the ball was launched into the Charlton box and once again Ross Mac was first onto the loose ball to smack the ball high into the Charlton net for his hat trick goal. 3.2 Leeds and we were all set for a hectic last 15 minutes.

Charlton now battered the Leeds back line in search of a third equaliser. Kenny tipped over a deflected effort into the away fans as tension levels rose. The home fans were on the ref's back for every decision. Funny that I thought if anything he was a bit of a homer? With the Leeds back line creaking Leeds were in need of some inspiration to help them get over the line. Smith had replaced Blackstock up front to try and pinch a killer goal. With 90 minutes on the clock we inched to the exit for a quick getaway. the delayed kick off had given us little time to catch our train home. Wait a minute.......Austin's won a free kick on the edge of the box. Who else but Ross Mac steps up to take it and curls a magnificent shot into the top corner. Get innnnnnnnnnn! 4.2 Leeds and all 4 to Ross Mac. Boom!

We hurried away from the ground to catch our train as the final whistle went grinning from ear to ear. I do like a good away win! Clearly a number of the home fans weren't that happy as they suggested that they had lost to 12 men! Funny I thought it was the 4 Ross Mac goals that beat them?

The dash across London was worth it as we just caught our northern bound train in time to reflect on a hard fought and rare away win. Ross Mac was the star but Pugh, Pearce, Austin and Kenny all performed to the highest standard. 4.2 probably flattered Leeds but in the end they deserved the victory for the way they adapted better to the less than suitable conditions...................and the lethal finishing of Mr McCormack. I wonder what Strachan was thinking when he heard his discarded Scottish striker had just scored his 6th goal in two games?

The win didn't move Leeds up the table but the three points certainly solidified their position just behind the top six pack just one point adrift. The international break looms before we entertain Middlesbrough. It would be nice to go on a bit of unbeaten run before Xmas wouldn't it? Bring it on.