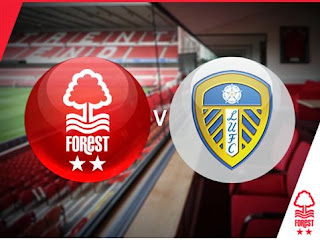 As the car headed south to Nottingham for our last game of 2013 we reflected on another "interesting" year on Planet Leeds. The year started with Neil Warnock's team putting in faultless efforts on the field whilst off the field Shaun Harvey was working his socks off looking for new players to boost the quality of the squad. The problem was none of that transferred into anything other than hopeful hoofball and poor results on the pitch. An inspiring cup victory against Spurs in January papered over the cracks as Warnock's tenure at Elland Road crumbled culminating in the sack after another inept home defeat to Derby appropriately on April Fools day. In true Warnock fashion he believed he'd done a super job at Leeds and left the club in a "good position". Thousands of Leeds fans had a slightly different view. Brian McDermott arrived to steer Leeds away from the relegation trap door and finish the season with a memorable victory at promotion chasing Watford. The summer didn't bring the flood of new personnel into Thorp Arch that many fans craved but Brian McD assembled a team that, with the help of a tactical change to a 3.5.2 system, are now firmly knocking on the play off door as 2014 beckons.


Pre match refreshments were taken in the Notts County bar as the Happy Chocker, Quiet One and yours truly pondered our chances of wiping the annoying smirk off Billy Davies' chubby face. Murphy replaced Tonge in the only change from the Boxing Day game whilst Forest continued with Halford leading their line in the absence of Darius Henderson. Our conclusion was this one was too close to call as we headed for away end. Over 26,000 were packed inside the City Ground as the game kicked off creating a lively atmosphere as both sets of fans exchanged views on Brain Clough, Jimmy Savile and the miners strike. 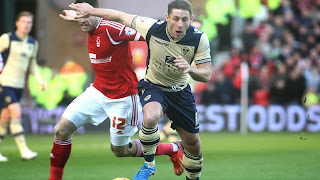 A miss hit pass back to Paddy Kenny caused the first incident of the game as the giant makeshift Forest forward, Halford, clattered into the Leeds keeper leaving him prostrate on the turf. After 5 anxious minutes Kenny was ready to resume. But was he fit? Leeds had the first chance of the game as Danny Pugh rifled in a shot from the left only for it to cannon away for a corner. The opening exchanges were frenetic as you'd expect from two teams in the play off spots and as a result we heard plenty of the ref's whistle in the first 20 minutes. Brown, Mackie and Reid seemed to either be fouling or being fouled during this period but as the game settled down Reid and Lansbury started to get an upper hand in the vital midfield area. Forest's pressing plan was forcing plenty of unforced errors from Leeds as the home side dominated possession.

On 23 minutes Brown and Reid clashed again and the ref gave Forest a dubious free kick deep in the Leeds half. Reid hoisted the ball to the far post looking for Mr Halford, surely a tactic Leeds were anticipating, but despite the bleeding obvious Halford was allowed to leap and head the ball past the struggling Kenny into the net. 1.0 Forest and the stadium erupted in celebrations. Leeds were now wobbling and Forest were oozing confidence as Lansbury and Reid pulled the strings at the heart of the midfield. Two shots within two minutes of the restart whizzed agonisingly close to the Leeds goal as the home side looked to press home their advantage. Leeds did respond in the shape of Brown as he collected the ball in the centre circle before giving a shimmy to lose his man and head straight for the Forest goal like a man possessed........memories of his stunner against Chesterfield came flooding back..........that is until his shot ballooned wide and handsome into the crowd! This did give Leeds some hope and two more chances quickly followed. First Austin snatched at a shot from outside the box before Smith glanced a header wide from a superb Austin cross.

It was Forest who were finishing the half the stronger though Majewski, Abdoun and Mackie all rattled shots in on the injured Kenny but the Leeds shot stopper stood firm. The half time whistle couldn't come quick enough for me to enable Brain McD to regroup his troops. Lees, Pearce and Zaliukas were all working overtime to keep the Forest at bay. Half Time 1.0 Forest.

The urinal philosophers weren't in a very positive mood as they reflected on the first 45 minutes. "That was rubbish" one fan commented. "We'll get nowt today" another offered. One fan thought Matt Smith was the cause of all evil whilst one was even berating Tom Lees. After that boost of positive thinking I settled down for the 2nd period. The opening exchanges of the half were similar to the first 45 minutes as Leeds struggled to make any impact on the Forest defence. There was a lot more urgency in the Leeds play though which gave a glimmer of hope of pulling the single goal back. It was Forest who nearly doubled their lead on 63 minutes as Abdoun smashed a shot at Kenny from the right hand side of the box.

Brian McD had made his first sub by withdrawing Brown in favour of the untried Ariyibi. The gangling youngster almost made an immediate impact as he found space to receive a lovely cushioned header from Smith on the edge of the box. His snatched shot went for a throw in which I've got to admit takes quite a bit of skill from the centre of the box! Byram followed Ariyibi onto the pitch as Leeds suddenly started to put pressure on Forest. Young Byram's extra pace and willingness to attack soon had Forest back pedalling as Leeds enjoyed their best period of the game. Forest were still a major threat going forward and the portly Reid nearly clinched the game on 81 minutes as he pinged a shot past Kenny and onto the post. Leeds broke down the right from the goal kick and Byram found space in the inside forward position and surged towards the Forest box................his low cross rebounded against desperate defenders legs and straight into Ross Mac's path who side footed the ball low into the net. Get innnnnnnnnnnnnnnnnnnn! 1.1 The away support celebrated as if we had just won the league and we were still celebrating when Matt Derbyshire drove a stunning 25 yarder past a despairing Kenny straight from the kick off. Double Bollox. 2.1 Forest and Leeds had fallen for the oldest trick in the book, never relax straight after scoring a goal.

The atmosphere in the stadium was now electric as both teams tried to finish the game off. Poleon, on for Ross Mac, headed over from 8 yards. Next he found space on the left but his shot was blocked. 5 minutes of added time wasn't enough for Leeds to pull back a 2nd equaliser and the game ended 2.1 Forest. There was a real buzz as the fans streamed away from the ground, "What an atmosphere, what a game.....the best we've played all season" an excited Forest fan shouted into his phone as I reflected on how far we've come in a year but also the fact that our squad is wafer thin and needs a small injection of quality in the January window. A fact supported by the uncomfortable thought that our potential "game changer" from the bench was an untried youngster who was released by Southampton in the summer.

Tom Lees was my man of the match closely followed by his fellow centre backs Zaliukas and Pearce. The midfield took a battering all afternoon and Smith struggled against Hobbs and Lascelles at the heart of the Forest defence. Kenny clearly wasn't fit after his 1st minute collision. Not sure why Cairns didn't replace him? We didn't perform in the first half but fought back in the 2nd when we had no right to but once we'd equalised it was so disappointing to concede within 10 seconds. Nobody said following Leeds is easy though.

So onto the home game with Blackburn on New Year's Day. Brian McD has a list of 4 players he wants to bring in when the transfer window opens. After today's showing we definitely need a little help if we're going to finish in the top six come the end of May. Interesting times ahead on Planet Leeds. Will 2014 be a better vintage than 2013? I've a sneaking feeling it might just be.

Posted by Andrew Butterwick at 21:30