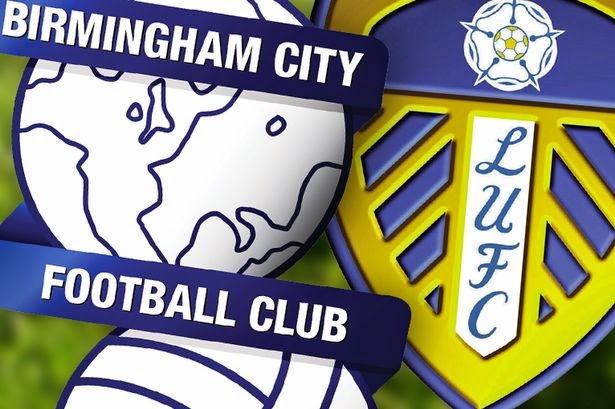 The final away trek of this hugely disappointing season saw the Happy Chocker, Quiet One and yours truly on the train heading for the Midlands and our clash with relegation threatened Birmingham City. The grey miserable weather matched Leeds' season perfectly. The hopes and aspirations of early season inspired by GFH's Emperor's clothes were soon lost in the mists of false promises, lack of money and another batch of dreadful performances by the men in white. Remarkably after all that we are still in the relative safety of mid table mediocrity as we head into the final two games of the campaign. I suppose we should be grateful for that?

We arrived in Birmingham with expectation levels low. Even after a couple of pre match refreshments it was difficult to see anything other than another turgid 90 minutes of football in front of us. Talking with some Brum fans as we walked up from Bordesley Circus changed my mind though. "Squeaky bum time for you lads" I ventured. "No chance we've a game in hand on the others and we should win today to make us safe" a rather too confident home fan retorted. "But you haven't won at home since October and you're only a point above the drop zone" I reminded him as he walked away in a haze of irritating self confidence. "I'd love it if we stuff them today" I muttered to HC in a reprise of a certain Mr Keegan's famous outburst. Suddenly I had my game head on!

Pugh and Smith replaced Warnock and Hunt respectively as the game kicked off in front of a 19,000 crowd with a healthy 3,000 plus from Leeds. As is custom now there were lots of fancy dress for the last away trip of the season with Scooby Doo, Bananaman, Fred Flinstone and a legion of SLI Roman centurions adding to the colour and noise in the away section. The atmosphere was in stark contrast to what was actually happening on the pitch as the game stuttered and spluttered through the first 20 minutes with nothing but disjointed football and little in the way of passing football to excite the fans. It was not difficult to see why the Blues haven't won at home for such a long time if this is how they play. Even our historic nemesis Mr Zigic looked ineffective. Leeds seemed content just to keep the game tight and restrict the blues to hopeful shots from outside the box. The game had 0.0 written all over it as the first half ended with Pearce making a terrific late block to deny Burke. "Wake up HC it's half time" I shouted. Not the best 45 minutes of football I've ever seen in fact I'd struggle to think of any that were worse?

The 2nd half started pretty much like the first but then on 57 minutes Alex Mowatt replaced Murphy. Not a substitution that had the away fans dancing in the aisles but it did have an immediate effect. Mowatt surprised everybody by bringing the ball down onto the floor before releasing Michael Tonge with what I believe is called a good pass...........Tonge curled a superb ball into the box where Birmingham born Smith placed a super header past Randolph in the home goal. 1.0 Leeds and the away end erupted in celebration. A minute later the same ploy worked again as good passing resulted in another cross heading towards Smith. The ball broke free for Pugh who smashed the ball gleefully into the net to double Leeds' advantage. 2.0. "You're going down with the Barnsley" boomed out from the Leeds fans as the home fans looked on helplessly.

Suddenly Leeds were in control of the game and passing the ball but not only that keeping possession. I must be dreaming. It got better with little over 10 minutes to go when another sweet move saw Ross Mac play a lovely ball into the box for Smith only for Cardiss to turn it into his own net. 3.0 Leeds and delirium in the away end.Why couldn't they play like this in the first half or for that matter all season? The blues fans were now streaming out of the stadium to the tune of "Time to go" and "we're only here to send you down" as the harsh reality of their precarious situation hit home. Macheda pulled one back for Birmingham and Brown so nearly got a 4th for Leeds after a barnstorming run. If that had gone in I think there would have been a pitch invasion! Leeds closed out the game with ease for a 2nd away win in a row. A late injury to Mowatt soured the celebrations.

Mowatt certainly contributed to the drastic change in the game as Leeds started to spray the ball about when he came on. Smith battled well again. In the end it was a good three points against a team who looked devoid of any ideas or determination. They now sit in the bottom three with just two games to go. That's squeaky bum time in my book and with any one of Charlton, Blackpool, Donny, Millwall and Brum all fighting to avoid the last relegation spot next Saturday is set to test the nerves of those uncomfortable fans.

The long journey home gave time to reflect on a result that was far better than the performance but at least we completed the double over the blues. So the final away trip for this season finished on a high, albeit after an awful first half. Now we just need to spike Derby's guns next week to march off into the summer with a spring in our step. Hang on haven't they beaten us on the last 97 occasions.............about time we won one then isn't it?

Posted by Andrew Butterwick at 22:54

Thank you for the last 2-3 years of your blog. I've just learnt how to make a comment on it. I was born in Goole and still have family there as well as Selby but I am in Auckland. My neighbour Keith and I are avid LEEDS fans, Keith even more so with a number plate with those very letters.

Regards to your 2 offsiders and looking forward to next season with less drama.

Thanks for the comments Anon.
MOT