The bright evening sun couldn't mask the frosty atmosphere along Elland Road as the Happy Chocker, Brother Chris, Quiet One and yours truly made our way towards the Theatre of Destitution for our clash with relegation threatened Charlton. To say expectation was low after Saturday's capitulation against the might Donny Rovers was a massive understatement. Nobody could find any spark of hope other than "We can't play as bad as Saturday can we" but we've already used that little nugget about 15 times this season. No it's safe to say there was quite a bit of negativity about pre kick off although discussing the rights and wrongs of Cellino's rant to the Leeds fan about Haigh, GFH, players and Brian McD did raise a chuckle or two.

One thing was for sure he couldn't start with the same team that performed so limply against Donny so Wootton, White, Tonge and Warnock were recalled at the expense of Murphy, Austin, Pugh and Stewart. Wootton moved to right back to allow Byram play wide right with Mowatt joining Tonge in the centre of midfield. Leeds started tentatively and had the first chance of the match on 2 minutes as Ross Mac cleverly clipped a ball into the box just inches off Smith's head. Only 17,000 fans had bothered to turn up with the swathes of empty blue seats speaking volumes for the current state of the club both on and off the pitch. Tonge looked to carry on from his encouraging form on Saturday as he burst into the box on 10 minutes after a sweet pass from Ross Mac but his shot flew high wide and handsome.

Charlton to their credit were trying to playing a passing game, probably due to the novelty of playing on a pitch with grass on it, but both side struggled to put many cohesive moves together. The best move of the half saw Leeds move the ball from one side of the pitch to the other before Ross Mac found Smith on the edge of the box but his shot went straight at the keeper. The half finished with Leeds standing off Ajdarevic allowing him to shoot powerfully at Butland. An uninspiring half finished 0.0 but at least we'd kept a clean sheet and there were slight signs of improvement from the nervous Leeds side. The game was wide open in the second half if any of the teams wanted to dare to win.

The under pressure Leeds boss made a tactical change at half time bringing Hunt on for Smith a move that baffled the already baffled home fans. Replacing a man who's scored 10 goals in 32 starts with one who has yet to score in 10 starts was either a bold or stupid move by the Leeds manager. Leeds were now attacking the kop and with the crowd making a lot more noise than the entertainment deserved hopes began to rise that we might just win a match especially when Ross Mac smashed a shot from 30 yards against the Charlton bar after 49 minutes. The joy was short lived though. A short five minutes later Ghoochanneijhad, or Gooch for short, was given all the time in the world on the edge of the Leeds box before curling a lovely shot past the despairing Butland. 1.0 Charlton and my heart sunk.............just as it's done in nearly every game since Xmas. One goal down and with Leeds fragile confidence this looked like they had the proverbial mountain to climb......................again. 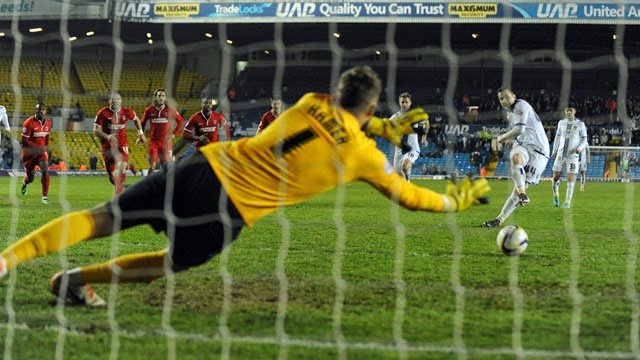 Minutes later there was a flicker of hope as Hunt lost his marker out wide on the right and swung in a dangerous cross for Ross Mac to side foot just wide from 8 yards. Very much like Lineker's goal against Poland in the Mexico World Cup only his went in! Leeds reverted to hopeful long balls as the team started to wilt like a bunch of Spinach in a steamer. Yet again the minutes ticked away with the Leeds play getting more and more desperate. Poleon came on for Wootton but there was a sad inevitability about the whole proceedings. Leeds were huffing puffing to try and retrieve a game they could have and should have been controlling. There were a couple of half chance scrambles in the box and Poleon so nearly reached a deep cross before the game entered added time. The last chance saloon beckoned as Leeds threw everybody at Charlton. White was bundled over in the box. PENALTY! A last gasp chance for Leeds to snatch a point. Up stepped Capt Ross Mac...............and his shot was saved low down to the goalie's right. In fairness a good save but the collective sigh of frustration could be heard in Sardinia. Charlton would have got a second but for a last ditch tackle in the box. The game ended 1.0 Charlton.

For most fans this wasn't unexpected and many expressed their frustration and anger as they streamed away from the ground. "McDermott must go he's clueless" one fan shouted. Nobody sprung to Brian's defence. "This is the worst team I've watched in 30 years" opined another with plenty of fans agreeing. Leeds didn't deserve anything from the match because they simply didn't pose any real threat throughout the game. This against a team struggling at the bottom of the table. A paltry 3 shots on target from Leeds tells it's own story and that's not a team that is "Fighting for it's lives" as Brian McD had inferred before the game. That's a statistic for a team that is woefully short on confidence, direction and willingness to fight for three points.

12 points above the relegation places with just 7 games to go. Difficult seeing us getting another point on this form and with trips to Wigan and then Watford next Tuesday to come the nightmare season is likely to get much worse. Brian McD's interview after the game did nothing to suggest that there is an end in sight to our abysmal form......................and we've got a visit to Oakwell coming up! It just gets worse.


Posted by Andrew Butterwick at 00:07