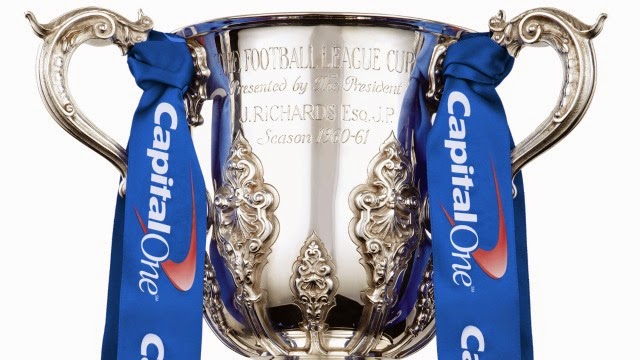 There was the unmistakable tingle of anticipation around Valley Parade as the Happy Chocker, Quiet One and yours truly trudged apprehensively to the ground for this Capital One Cup 2nd tie with Bradford City. The locals were salivating like hungry Hyenas waiting for a certain kill at the prospect of their heroes taking on a Leeds United side who were struggling to find any sort of rhythm or consistency and were led by a coach who in the opinion of most fans and media was a dead man walking. This was certainly a match that would test the resolve of even the most hardened follower of the mighty whites.

The team news didn't exactly inspire renewed confidence. Austin and Beradi were injured and Byram and Bellusci suspended which meant starts for Norris in midfield and Wootton at right back. Taylor replaced Silvestri in goal. The stadium was rocking to it's foundations as the game kicked off. The opening exchanges were as frenetic and feisty as you would expect from a local derby with Leeds enjoying some early joy against the Bradford rearguard. Smith headed a good early chance wide then Murphy cannoned a shot off a defender for a corner. Cooper headed the corner over the bar. Maybe this wasn't going to be such a bad night after all? The pace continued at breakneck speed and soon Luke Murphy received a needless yellow card for a reckless late challenge on Liddle. He was lucky it wasn't a red card. Leeds were pumped up and carved out another good chance that Warnock screwed horribly wide after good build up play. 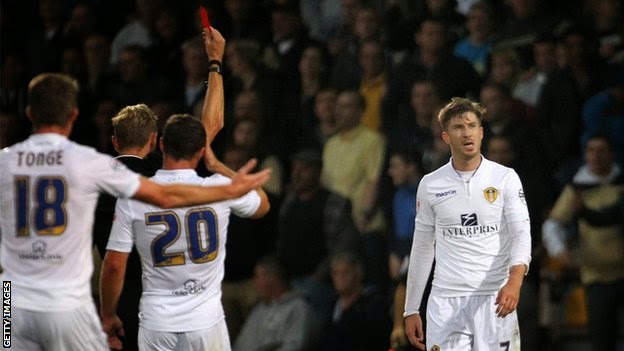 Bradford started to get a foothold in the game as the game approached 20 minutes with Meredith and Kennedy finding acres of space on the flanks for the home side. Bradford's first real chance came from a Meredith cross as McLean failed to hit the target with a header from 6 yards. Whilst the home team were exploiting the flanks Leeds were hamstrung down the right flank as Wootton found good space but didn't have the confidence or way with all to go past a man and as a result turned the ball back inside or pumped a hopeful ball somewhere in the direction of Smith. On the half hour mark the game changed.

Luke Murphy, who was already on a yellow, made yet another hopelessly late challenge this time on Meredith giving the referee no option but to double his yellow into a shiny red card. The fourth red for a Leeds player in five games. If the game was difficult with eleven on the pitch it now seemed impossible with 10 men and still 60 minutes to go. Murphy trudged off the pitch in shame. What was the Hock going to do to change things this time? Sensibly he went for a 4-3-2 formation and battened down the hatches to repel the inevitable Bradford onslaught.

Leeds limped to half time without conceding.

The 2nd half was the classic 10 men v 11 men game with Leeds defending resolutely looking to keep it tight and try and pinch a goal as Bradford pushed forward. Bradford had plenty of possession but found the Leeds defence a hard nut to crack. Taylor made a couple of good saves and when Bradford did find a way past him Pearce scrambled the ball clear. At the other end Norris spurned a glorious chance on the edge of the Bradford box. Then with 8 minutes to go the game that had been bubbling all night exploded into combination of bewildering emotions. First Leeds had a rare attack...........Norris found Smith on the penalty spot who buried his header into the Bradford net sending the 3,700 away fans into ecstasy. 1.0 Leeds and a heady mixture of relief and joy surged through the Midland Road Stand.

There is an old saying that you are always at your most vulnerable when you've just scored a goal. Leeds felt they had to prove that true not once but twice as first Knott hit an absolute screamer past Taylor just a minute after the Leeds goal and then Hanson headed Bradford in front barely 60 seconds later. Unbelievable and the home crowd were now on cloud nine. The crowd spilled onto the pitch delaying the game but there was still plenty of time for Leeds to miss two golden chances to equalise when first Poleon wasted a chance 4 yards out and then right on time Smith thundered a header over the bar when he looked certain to score.

Full time 2.1 Bradford. There was an inevitability about this defeat that understandably didn't sit well with the Leeds faithful but shouting for Hockaday's head when there was still time to rescue the game was wrong in my book. Have a go after the game but not when we still had ten players trying to win the game. Leeds had battled hard against the odds after Murphy's recklessness but this was another painful reminder of how much work there is still to do to mould these players into an effective unit. We made our way home disconsolate but still looking for the positives........"at least we didn't lose 4.0" I mused as we headed back down the M62.

The inevitable sequel to this defeat has been this evening's sacking of Hockaday. Who will be in charge on Saturday? Will there be more players on their way to Leeds? Will we ever finish another game with eleven players on the pitch? Life is never dull following Leeds but once again we are in the eye of a storm with no clear way out. A six pointer relegation battle against  Bolton up next. That should be fun?


Posted by Andrew Butterwick at 23:21