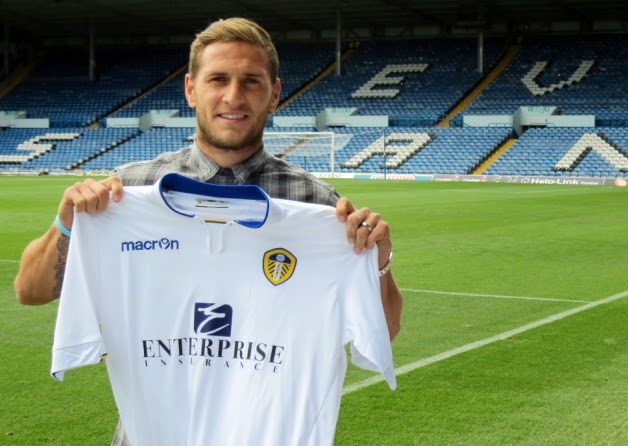 After a week of frantic transfer activity against a background of all too familiar negativity regarding the quality of this year's Leeds United team I was boarding the Leeds bound train at Selby station full of unjustified expectation. Fresh from my holidays this was my first look at Mr Hockaday's "new" Leeds team against a strong Boro side live and exposed on national TV..............what could possibly go wrong? As ever the Happy Chocker and the Quiet One were in tow gleefully regaling me on what I had missed at Millwall and at home to the mighty Accrington Stanley. Safe to say in between the frequent use of the words shite, same old and clueless there wasn't much to indicate that Cellino's Italian revolution had yet ignited the comatose giant that is Leeds United!

Still news of Billy Sharp's capture together with Liam Cooper and Bellusci gave some hope that new blood was surging into the veins of this famous old club. Question was would it be enough to fire a realistic promotion challenge this year? Time will tell. The atmosphere around Elland Road was buzzing as we approached our usual spot in the Capt's Lounge for our pre match refreshments. Something wasn't quite right though............people were milling around the turnstiles rather than going through them as they were still shut with just under an hour to go to kick off! Did they think it was still a 3pm start I mused to HC.

Once inside we got sight of the team. Only four of last year's underwhelming team had made the starting eleven. Sharp partnered Doukara up front with Murphy, Austin, Bianchi and Ajose forming a midfield diamond. Pearce and Cooper were the centre backs with Byram and Warnock filling the full back spots. Silvestri was in goal. The majority of fans weren't full of optimism as we settled into our seats but as ever with Leeds that didn't stop the decibel level rising as the packed South and North stands pumped up the volume as the game kicked off.

Leeds were on the attack straight away as a delicate through ball saw Sharp stretching to put the ball past the advancing Mejias who blocked the debutant's first touch for Leeds United only for Ajose to hammer the rebound goalwards but a desperate Boro leg spoilt the ultimate dream start for Leeds. That got the crowd going and confidence increased around LS11 as Leeds tried to build on their early chance. It was the visitors who started to look dangerous though as both Adomah and Reach raided down the flanks. Reach in particular was causing Byram problems whilst Adomah exposed Warnock time and again on the other flank. The visitors pressure peaked as Ayala thundered a header wide on 24 minutes and then minutes later Adomah had a spectacular bicycle kick goal chalked off for some foul the Mr Atwell saw and many others didn't. Regardless it was worryingly poor defending by the Leeds back four.

New signing Cooper had a nervous opening 20 minutes but began to grow in confidence as he balanced some impressive tackles and interceptions with a couple of loose passes that found a Boro man. Leeds responded to the Boro pressure well as Bianchi had a well hit shot saved by Mejias before Sharp wriggled free but shot wide. The match was as tight as a drum as half time beckoned. Warnock made up for an indifferent first half with fantastic goal saving block on Adomah on 45 minutes. Half time 0.0.

The urinal philosophers were in forgiving mood. "Not half as bad as I was expecting" one wag commented. "At least we've still got a clean sheet" another grunted, whilst another thought "after last week this is positively refreshing" So with a smidgen of positivity seeping out the gents I returned to my seat anticipating at least a point from this televised clash.

As they did in the first half Leeds started on the front foot gaining two corners in quick succession but both opportunities went the way many corners did last season................easily cleared and then breaking quickly to test the Leeds defence. Doukara hobbled off early in the 2nd period to be replaced by Tonge with Ajose moving up front to partner Sharp. Not sure Matt Smith will have felt that positive about that move? The game continued as tight as ever with both goalies having relatively quiet games.

Pantomime villain, Adam Clayton, joined the fray for Boro on the hour thankfully minus the blue and white beard he sported at the dog botherers last year. The longer the game went on the tenser it got. Warnock performed another barnstorming tackle to block a goal bound shot. Austin scuttled around making a number of bone crunching tackles that pleased the fans as the game cried out for just that bit of quality that would tip the balance.

Ajose's move up front didn't really work and he was replaced by Dom Poleon on 75 minutes as Leeds looked for a way to unlock the resolute visitor's defence. Then just when I was thinking we were going to grind out a goalless draw Leeds created a golden chance. Good play on the right created an opening for Murphy who hit a sweet cross to the back post where Sharp had found space..........his header squirted horribly wide as 3/4's of the fans jumped up to celebrate a certain goal. Bollox!

We were now deep into squeaky bum time as first Boro and then Leeds jousted for the chance of three valuable points. Young Lewis Cook replaced Austin with 5 minutes left and immediately made an impact with some clever touches deep in the midfield cauldron. Then with just 2 minutes remaining Elland Road erupted. Tonge latched onto a loose ball on the edge of box and hit a stinging shot that Mejias could only parry.............Sharp was onto it like a hungry crocodile waiting for a wildebeest to cross his river and slotted home the winner in front of the delirious kop. Get innnnnnnnnnnnnnnnnnnnnnnn! Sharp and his team mates celebrated as if they had just won the league as relief exploded around LS11. Debutant Sharp earned a yellow card for what's technically described as "over celebrating a goal" but in any normal fan's mind that offence is technically impossible. 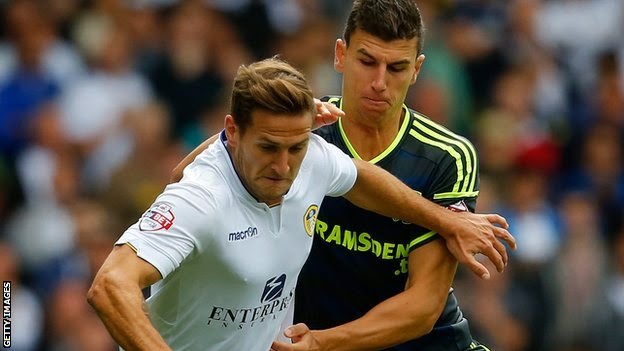 There were still 5 minutes of nervous added time to endure before Mr Atwell blew the final whistle and signal an unexpected win for the home side. The crowd streamed away with smiling faces something that seemed as likely as the Pope appearing on the Vatican balcony advertising Durex after last week's horror show at Millwall. A week is a long time in football.

Out of the new boys I thought Sharp looked good together with Doukara. Bianchi looked very average but Ajose was bright and showed some neat touches. Cooper had a steady, promising debut and Silvestri in goal looks an excellent signing. Lewis Cook used the 5 minutes game time to show why he is so highly rated despite his tender years. So whilst the team are by no means the finished article there is plenty of promise for us long suffering fans to feed on. Brighton at home on Tuesday will be a tough test followed by a trip to Watford. Results in those two games will certainly fire the Italian revolution.