The last time these two fierce West Yorkshire rivals met at Elland Road it was the height of the Leeds managerial Pantomime season. Brian McD had been sensationally sacked by Cellino who was then chased around LS11 in his taxi by irate fans. This time round round the managerial waters around Elland Road are a lot calmer with caretaker coach Redfearn steering Leeds on a mini unbeaten run whilst the Mad Italian searches for a permanent replacement. The positiveness that a decent run breeds was evident as the Happy Chocker, Quiet One and yours truly made our way to the members bar for our pre match refreshment.

It made a nice change to quaff a pint of John Smiths with a healthy portion of pie and peas safe in the knowledge that if Leeds continued to play as they did against Bournemouth and Birmingham then Huddersfield were in for a torrid time given their dismal form. Redfearn had made one change to the system and personnel that dealt so clinically with Bournemouth. The 4-3-3 system was ditched in favour of a more conventional 4-4-2 with Sloth replacing Billy Sharp. Doukara and Antenucci started up front.

Just short of 30,000 expectant fans were packed into the Theatre of Italian Dreams as the match kicked off. The atmosphere was tingling with local pride as Leeds started on the front foot against a hesitant Town side. The passing game that improves each game was soon on show as the team in white pinged the ball confidently to each other trying to stretch the visitors. Antenucci nearly benefited from the early pressure as he fired a goalbound shot into the body of a desperate Town defender. It was Town who created the first real chance though as Peltier got to the bye line but Nahki Wells was high wide and handsome as he tried to convert the cross. Town's new coach, Chris Powell, had been vocal in the lead up to the game in saying his first priority was to stop his new side leaking goals. It was easy to see why as their back four was chaos personified whenever Leeds applied the slightest bit of pressure. 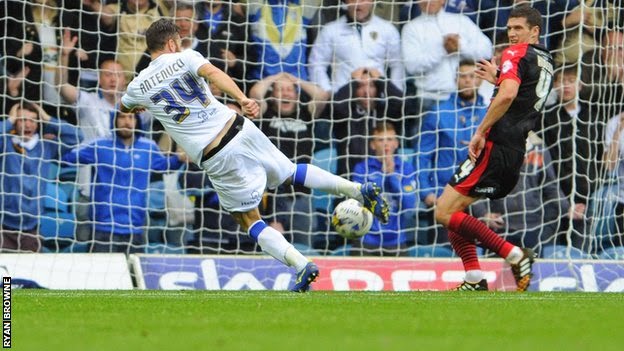 The decibel levels had been steadily rising for the first twenty minutes as the home fans gorged themselves on a Leeds team playing good confident football. The roof was about to come off the old stadium though. The impressive Antenucci chased a ball into the corner with Joel Lynch. The Town defender panicked and blasted the ball against the Italian only to see the ball balloon onto the edge of the box where Mr Austin was the first to react. Rudy didn't waste any time and just smashed an absolute screamer past the helpless Smithies. 1.0 Leeds and all of a sudden the pre match confidence looked absolutely spot on.


The goal sparked Town into life as they upped their game in search of an equaliser. Harry Bunn was causing some irritation to Berardi down the flanks and it wasn't long before the Leeds full back picked up a yellow card for an ill advised lunge on the Town winger. Bellusci soon followed him into Mr Foy's notebook. Fears of more red cards for Leeds started to worry me. 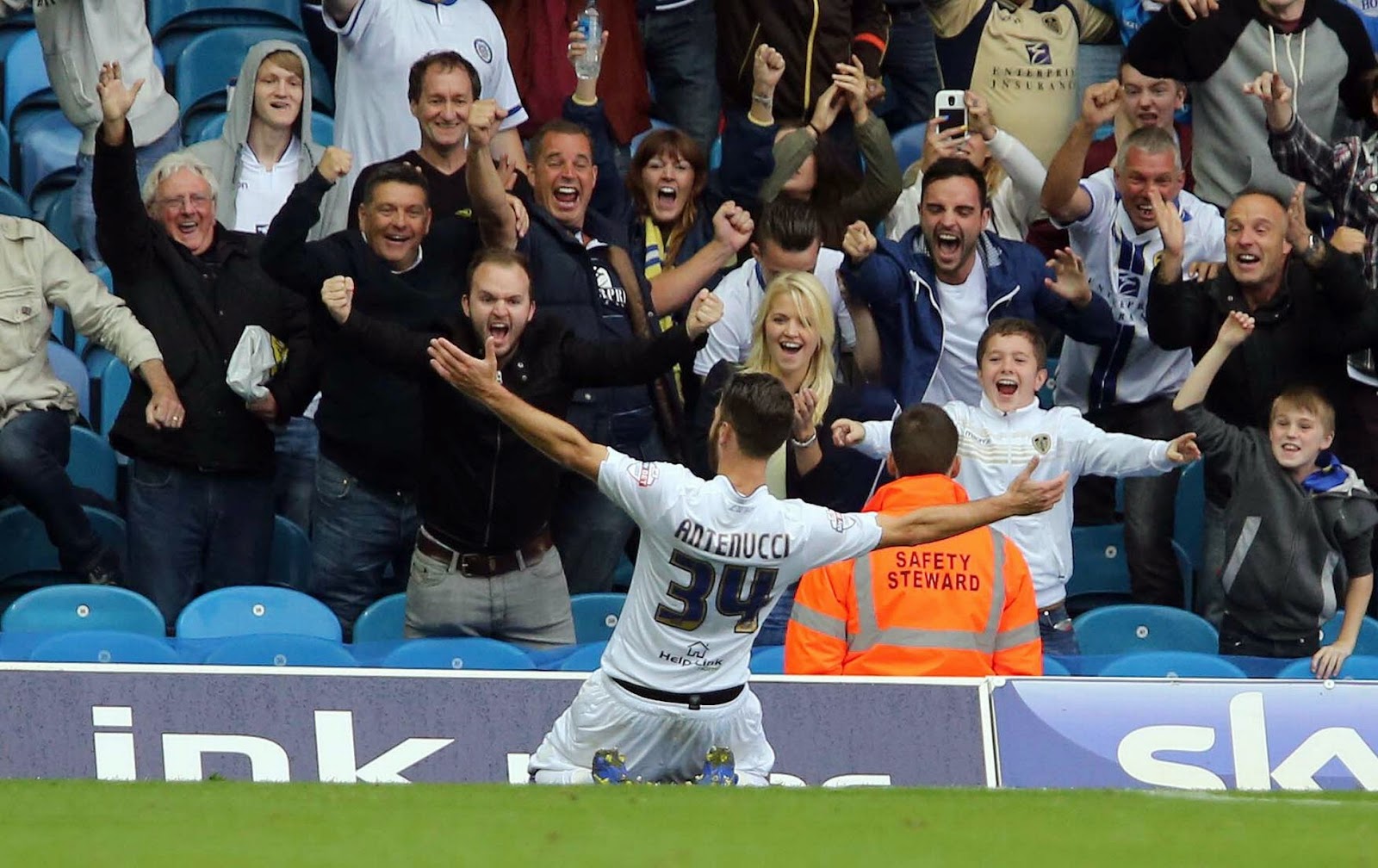 The game was heading for half time with Leeds regaining some control of the match when suddenly Leeds broke quickly out of defence and Antenucci was hurtling towards the Town goal with only two Town men anywhere near him.................he slipped a sublime ball to Bellusci (where the hell did he come from?) who clipped a perfect wedge shot over the oncoming Smithies only to see the ball rattle off the underside of the bar for Antenucci to pounce first and drive the ball into the open net. Get in! 2.0 Leeds and Antenucci was celebrating his 2nd goal in a week. He'll enjoy his pint in Spencers tonight!

The Urinal philosophers in the half time debate were in a strange mood. There were all smiling. Not one peep of negativity could be heard as the pre match refreshment was discarded. Very, very strange! "He can't replace Redders now" one fan commented reflecting the views of the majority of his peers.

Town tried to get some momentum as the 2nd half got under way but they had yet to trouble Silvestri with a shot on goal. Leeds on the other hand were almost strolling through the game with Austin, Cook and Bianchi totally dominating the midfield area as they passed there way out of trouble and onto attack on numerous occasions. This was good to watch and the home fans were lapping it up. The Town defence looked as weak as a newly born puppy whenever Antenucci, Doukara or Austin ran at them and not surprisingly it was this combination who were their final undoing. 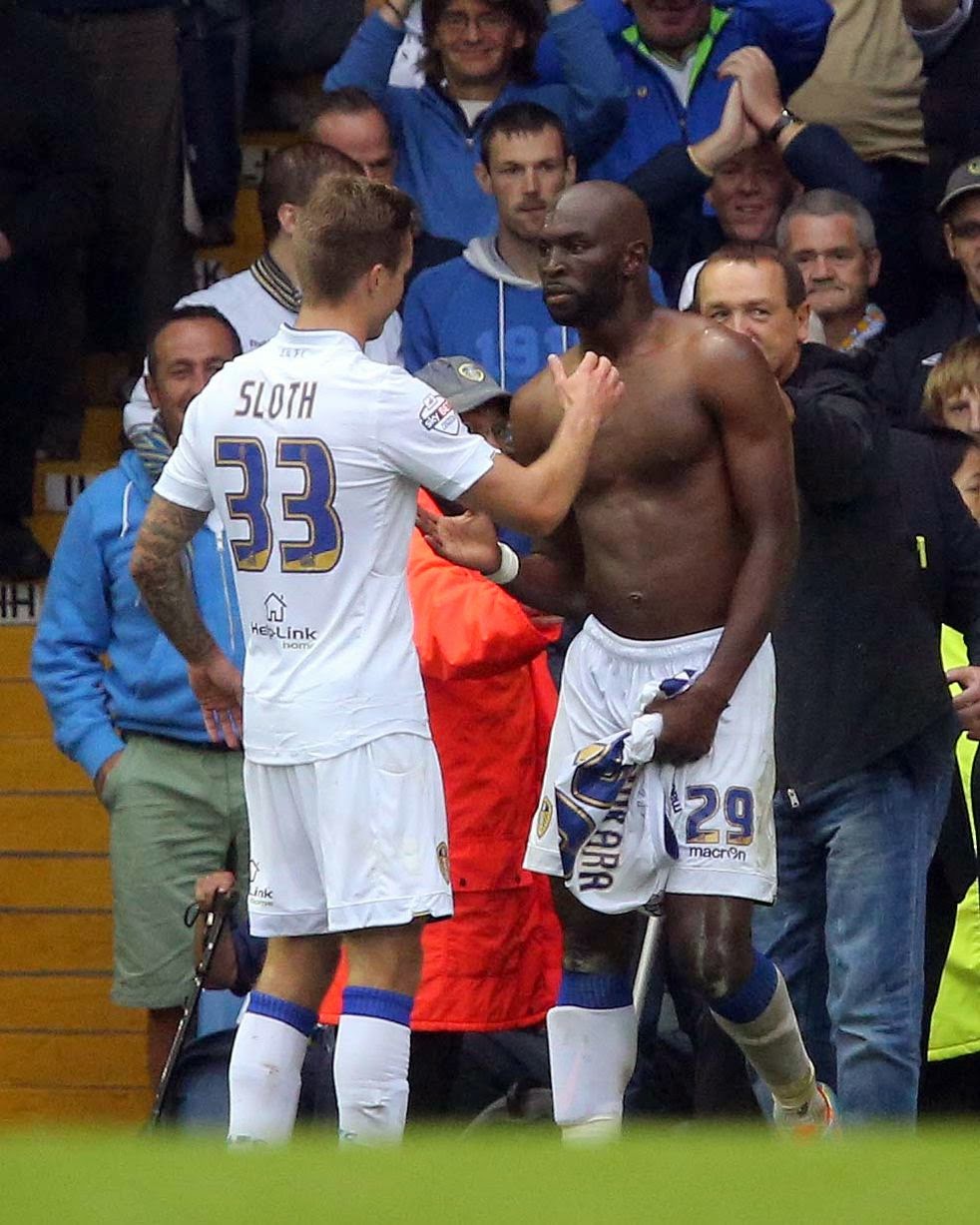 First Doukara was caught just offside from an Austin pass but on 68 minutes Town were not that lucky. Austin slotted the big striker through with a peach of a ball which he converted sweetly to give Leeds an unassailable 3.0 lead. Doukara got a yellow card for his celebration, ridiculous, but he didn't care. Leeds were now cruising. Even Berardi's 2nd yellow and dismissal couldn't throw them off track as they toyed with their poor West Yorkshire neighbours. "We're taking the piss, We're Leeds United we're taking the piss" the home fans gleefully sang. Town's miserable afternoon was complete when Stead blazed over from 7 yards on 83 minutes. Antenucci was denied a fourth Leeds goal on 85 minutes by a finger tip save by Smithies as he sped away from his marker.

Both Austin and Doukara were replaced before the end to receive thunderous ovations from the home crowd. Mr Foy blew his whistle to signal the end of the game and a comfortable 3.0 win to Leeds. As we left the ground those strange smiles were all over the fans faces as they headed for home. Redfearn has moulded the impressive imports with the cream of the academy into a very useful unit. Cook was again outstanding for such a young lad ably supported by the rejuvenated Austin and the steadily improving Bianchi. Doukara and Antenucci looked sharp and mobile up front causing the creaking Town defence problems all afternoon. Pearce and Bellusci looked solid at the back whilst Warnock had another storming game. Silvestri didn't have a shot to save all afternoon. My man of the match went to Austin who was a revelation driving at the heart of the Town defence. He must have nuclear powered lungs?

That's 4 games unbeaten under Redfearn. Hopefully he will be allowed to continue by Cellino? Suddenly we are looking like a real team something a lot of fans are finding it difficult to relate to after the years of pure dross we have fed on. We are still work in progress though but if we carry on like this we'll be glancing at the league table and mentioning words like top six and even promotion. Steady on chaps its still early days.

Next week sees us at Brentford a match where we will allegedly be watching from the home terraces. A crash course in cockney needed then before our trip to London me thinks?

Posted by Andrew Butterwick at 19:45

It appears that the long wait for a team capable of winning promotion back to the premier league is over. It was always going to take a little time to mould this group of talented strangers into a team, well that process appears well underway. Let's hope the new coach can keep it going.

Got home tickets for Brentford too! Will bust my lungs not cheering when we score.