A combination of fog, traffic congestion and seemingly every obstruction known to man failed to stop me getting to the Theatre of Italian Dreams for the game against Charlton. Admittedly there were only two minutes to kick off when I took my usual seat in the North West corner but at least I made it in time............just. Question was would the effort be worth it or was I about to see another disappointing and frustrating Leeds display? Redders had made three changes to the side that started in the Welsh capital with Cooper replacing the suspended Pearce, Adryan in for Morison and Byram back at right back in place of Berardi. The captain's armband went to Leeds most consistent performer this season, Stephen Warnock.

Just 18,000 were in the old stadium as the game kicked off. Leeds opened brightly with both Ant and Douks testing the Charlton goalie in the first ten minutes both from Bianchi passes. The 4-5-1 formation deployed on Saturday was replaced by the diamond inspired 4-4-2 with an eager midfield four of Mowatt, Cook, Bianchi and the fleet of foot Adryan. The home side looked good in patches in the opening quarter but too often the final pass didn't quite make it to the intended destination. Charlton's Buyens was booked just before the half hour for embedding his knee in Antenucci's back as he completely fooled him with a neat turn. From the resulting free kick crisp Leeds passing released Adryan who danced across the 18 yard line before laying off to Mowatt who hit an absolute screamer that the ref adjudged to have been tipped over the bar. The replay suggested otherwise but for once we got the rub of the green with a ref's decision. Antenucci's indistry was rewarded 5 minutes later when he made a diagonal run into the box but his shot hit the side netting.

When Charlton had the ball they looked a decent passing side but didn't really trouble Silvestri in the first 45 minutes. The half ended goalless in a match that was struggling to rise above the term scrappy. At times the ball was flashing around the centre circle like a pinball table with the tilt alarm blaring out. After saying that there were more positives than negatives for the home side. Adryan, Mowatt and Warnock were at the heart of most of the good things from Leeds whilst Cooper hadn't put a foot wrong at the back. Bianchi looked strangely off the pace though. After our tendency to undo any first half positives with 2nd half negatives this season we all waited with baited breath to see what second period delights we would be treated to tonight. We didn't have to wait long. 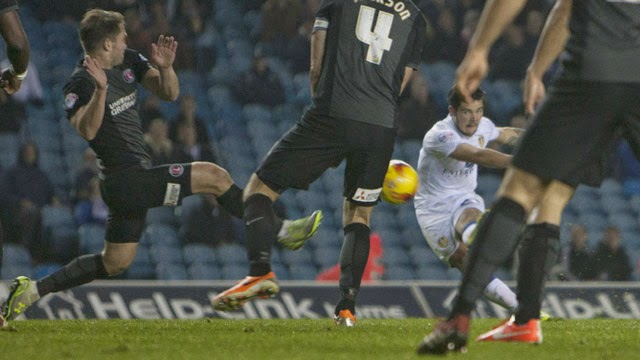 With Redders half time pep talk still ringing in their ears Leeds laid down a significant gauntlet as they now attacked the kop end. Adryan and Warnock  combined well down the left before the new Leeds Captain pulled a teasing ball back from the bye line...............the ball came out to Mowatt on the edge of the box who curled an unstoppable shot into the top right hand corner of the goal sending the home crowd into raptures. After his impressive goal on Saturday this was another that will feature in the LUFC goal of the season contenders. 1.0 Leeds. Could Leeds now build on the momentum and kill the game off?

The next ten minutes suggested they could as they strode confidently forward. Twice Antenucci found space inside the box but failed to finish as chances started to flow. Just when it looked like we were going to take the game away from the South Londoners the over generous side of Leeds' defending helped the visitors out as Gudmundsson's soft shot was fluffed by Silvestri at the near post and the ball crept agonisingly over the line. 1.1. Deep sigh and count to ten. Leeds did put Charlton under immediate pressure as they looked to regain the lead. Again both Ant and Douks had good chances but couldn't quite convert them.The game was a lot more open now as Leeds attacked with some conviction. On 66 minutes the home crowd were once again on it's feet admiring another stunning goal. Warnock started the move as he picked up a ball on the left and with everyone expecting him to swing the ball into the box he slid a great ball into Mowatt who was lurking with intent 25 yard out. This time he curled his shot into the top left hand corner again leaving the goalie no chance. 2.1 Leeds and a third goal in two games for the young Leeds midfielder. Awesome. Surely we wouldn't lose this lead would we?

Leeds had the momentum and once again looked for the killer third goal. Antenucci twice had shots blocked as he tried to add to his goal tally. Sloth replaced the tiring Adryan on 70 minutes. Another highly promising performance from the young Brazilian. Charlton looked to rescue the game by throwing on the giant Onyewu to try and grab the equaliser. His height caused the Leeds back four trouble but the home side were doggedly defending their precious lead and starting to dream of a welcome three points as the game entered the final ten minutes.

Bellusci has down many good things in his short career with Leeds but he also has his moments of well plane stupidity. We were about to witness two such moments in quick succession. First he dragged Onyewu down just inside the Leeds half to give away a needless free kick. From the free kick Byram conceded a corner. The corner came over and the ref pointed to the spot. Why? From 100 yards away I had no chance of seeing but whatever it was Bellusci received a yellow card. He had clashed with Ben Hiam and depending on your view it was a harsh decision by a shit ref or a stupid, unnecessary foul by an over impetuous mad Italian. I went for the latter. Gudmundsson tucked away the penalty with ease and the scores were all level again at 2-2. Even deeper sigh and count to twenty.

Definitely two points dropped after two absolutely stunning goals from Alex Mowatt. Despite the frustration of gifting two goals to the Londoners there were still more good than bad points from the game. Mowatt had to be man of the match but Warnock, Adryan and Cooper all gained mentions in dispatches. This team is still work in progress and patience is needed but there are definite signs that once the team gels we should have a better 2nd half of the season than the first.

Blackpool arrive at Elland Road on Saturday ripe for a nice juicy three points? I live in hope.


Posted by Andrew Butterwick at 00:23