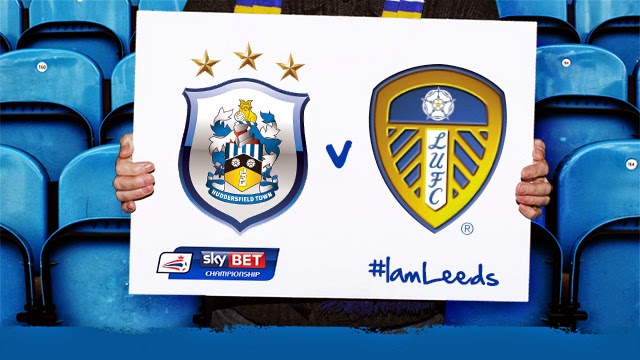 The weather was wet, cold and decidedly uninviting as the Happy Chocker, Quiet One and yours truly arrived at Selby station for the journey to Huddersfield and our high noon clash with Town. As ever the off the field tribulations of the mighty whites had dominated the news this week but today was all about the Football and the small matter of completing the double over our dog loving cousins from down the A62. After an amusing last leg of the journey from Dewsbury including some good natured banter with the Town fans we were passing Harold Wilson's statue and heading for the ground. Redders team news confirmed new signing Bamba as a replacement for the suspended Bellusci in an otherwise unchanged starting eleven.

The match kicked off at an electric pace as you'd expect from a West Yorkshire derby. Butterfield tried his luck in the first minute for the home side but dragged his shot wide. It was the resurgent Luke Murphy who drew the first save of the game though as he unleashed a swerving thunderbolt from twenty yards that Murphy did well to palm away in the Town goal. Leeds were looking to catch the home side cold though and minutes later they did just that. The lively Murphy won the ball in midfield and slotted a perfect ball for Byram to beat Murphy and lift the ball into the open net. 1.0 Leeds and the 4,000 travelling fans were in ecstasy sensing a further extension to their unbeaten league record this year. Things weren't going too well for the home side as their star striker Wells limped off injured just a minute after the goal.

Leeds built on their good start and soon they were threatening the Town goal again as Morison blasted high and wide. Town drew breath though and started to pressurise the Leeds back four. Scannell looked dangerous on the wing but the ever improving Taylor was battling well to nullify his threat. Smith and Edgar tried long range shots as the Terriers looked to sniff out some decent chances. Bamba had started well and showed his pace and willingness to play the ball out from the back which although looking classy will undoubtedly give a number of fans heart attacks before the season's out.

Vaughan, resplendent in his face mask, won a corner for Town on 25 minutes after the hard working Austin blocked his goal bound shot. Butterfield lined up the corner as Vaughan, Morison and Silvestri jostled for position on the goal line. The ball went deep to the back post where Bunn came from nowhere to head home the equaliser to the delight of the drum thumping home fans. 1.1. Poor defending from Silvestri I'm afraid.

The game got scrappy with niggly fouls from both sides. Taylor, Austin, Lynch and Butterfield all picked up yellow cards from the Premier League ref Mr Foy who skilfully managed to enrage both sets of fans with his strange decisions. Scannell nearly snatched the lead for Town right on half time as he rolled Taylor in the box but saw his shot roll inches wide. Town had finished the half better but the sides went for their half time orange with the scores all square. Bamba, Byram and Cook had all looked good in the first 45 minutes but Morison was struggling on his own up front against the home defence.

The 2nd half followed the same pattern of the first half with lot's of stop start play in a tense and fractious contest. Mowatt tried to break the deadlock with a well hit shot from 20 yards on 56 minutes but it drifted just over the bar. He then found space a minute later but his shot deflected away for a goal kick? Another one of Mr Foy's strange decision. He should stick to cycling. That was Mowatt's last touch as he was replaced by Antenucci as Leeds changed from 4-5-1 to 4-4-2 in an attempt to break the High Noon deadlock, 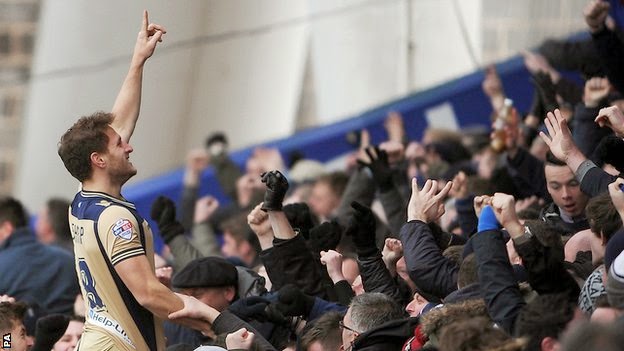 The tension was high and the crowd unusually quiet as the game entered the last 15 minutes. Huddersfield went close twice in as many minutes as Butterfield first dragged a shot across the Leeds goal before Morison cleared a goal bound header from Bunn. Then just as Town threatened they seemed to run out of steam and ideas allowing Leeds to take full advantage. Sharp replaced the injured Cook with 5 minutes to go and suddenly chances began to appear for the mighty whites. Antenucci blazed wide with the goal wide open in front of him after good work from Byram then Morison fired inches past the post but that was before Mr Foy's coup de gras in denying Leeds not one but two clear penalties in one move as first Byram and then Antenucci were downed in the box. Maybe it just wasn't Leeds day? But the football bad luck gods hadn't accounted for Billy Sharp.

As the clocked ticked onto 90 minutes Leeds once again attacked down the right. A long ball was going out for a goal kick before Byram somehow recovered it and worked the ball inside to Antenucci who looked up and picked out Sharp in the box to head home the winner in front of 4,000 delirious fans. It was carnage in the away end as we celebrated an oh so sweet late, late winner. The edge was taken off the celebrations though as Tommy Smith lay motionless in the box after colliding with his goalie in trying to stop the goal. After a long treatment on the pitch he was whisked off to hospital in the air ambulance with the good wishes of all at the ground and farther afield with him.

Leeds held out the final 4 minutes for a very welcome away win and the second double on the trot not forgetting extending their unbeaten run this year. There was warm glow emanating from the Leeds fans as they streamed back up the hill into Huddersfield. It was the glow of watching a 90th minute winner in a local derby. Delicious. My man of the match went to Byram with Bamba a close second. This was another gritty and determined Leeds performance and completed an unbeaten January for the first time since about 1934. Despite all the distractions, departures and non departures Redders has got a real fighting team spirit in this team that shone through today.

Brentford up next at Elland Road a match we will enter with the confidence gained from today's victory. Is this the start of a consistent run from the men in white? I do hope so.


Posted by Andrew Butterwick at 17:45