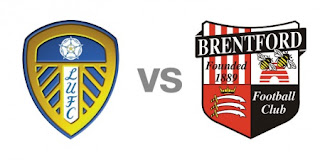 After the annoying international break the vast majority of fans were chomping at the bit at the prospect of the return of "normal" football and yours truly was no exception..........especially for an all too rare 3pm kick off! Even the dismal West Yorkshire weather couldn't put a dampener on the mood in the car as the Happy Chocker and the Quiet One joined me as we headed for LS11. Brentford were the visitors a team that we have struggled against in recent years but with our unbeaten start and the away win at Derby pumping optimistic blood through the veins of the LUFC family hopes were high of further success against the West London outfit.

Much of the pre match debate involved Botaka, the new signing from Excelsior, and Sam Byram who's recent form has been patchy at best. Has the incessant transfer speculation turned his head or is he just struggling with the advanced role he's been handed in the team this year? A couple of pints later we took our seats looking forward to a 2.1 victory?

Rosler stuck with the same starting eleven that dispatched of Derby with no place on the bench for new boy Botaka. A decent crowd of 25,000 were inside Elland Road as the game kicked off in watery sunshine. Brentford may have sold a number of the players that helped them into last year's play offs but it was soon evident that they had done some smart moves in the transfer window to replace them. Judge and Kerschbaumer both had early attempts at the Leeds goal as they settled into a very effective neat passing game that revolved around McCormack in the visitors midfield. Charlie Taylor did test the Bees goalie with a stinging shot that he spilled but nobody was on hand to follow up.

Brentford started to dominate the game with their loanee Austrian striker Djuricin catching the eye with some impressive play so it was no real surprise that it was him who finished off a lightening counter attack from the visitors in the 30th minute to give them a deserved lead. 1.0 Brentford. All the early season optimism was quickly draining away from the expectant crowd as Brentford continued to dominate. Judge was giving Berardi a testing examination on the Leeds right flank as Brentford showed the benefit of two speedy wingers and a midfield who could spray the ball about. Things were looking a tad grim for the mighty whites as the game headed for half time. After the tigerish way Leeds had closed Derby down in the previous game it seemed as if they were content to let Brentford have the ball and play for some unfathomable reason. Leeds limped to the break thankful that they were only the one goal down.

The urinal philosophers were not in forgiving mood as they debated the first half performance. "Byram's rubbish again" one fan opined whereas another thought "Berardi's getting shafted everytime by their winger" One brave fan suggested that Brentford were actually playing well but soon got shot down in a blaze of further criticism of the men in white. Maybe David Cameron wasn't that far off the mark with his view of Yorkshire people?

Something had to change and fair play to Rosler he swapped Mowatt for Antenucci and changed the system to 4-4-2 ready for the 2nd half. This had an immediate effect as the visitor's centre backs could no longer bring the ball out from the back as they had in the first half as Wood and Antenucci harried them at every opportunity. But it was still the visitors who had the first real chance of the 2nd period as Silvestri failed to come for a deep cross allowing Bidwell a free header which thankfully he headed back across goal instead of at it allowing Wood to gratefully hack the ball to safety. A goal then would have sunk Leeds but with the introduction of Murphy Leeds suddenly picked up the pace and realised they were still in the game. Dallas started to get more joy down the flanks as he tormented his former team mates and Antenucci yet again added more potency to the attack.

The momentum was swinging towards Leeds as they bludgeoned the Bees defence looking for an equaliser. Byram, Murphy and Cook all attempted shots from outside the box all of which ended up in the kop without troubling the Brentford keeper. As Leeds pushed forward they left themselves exposed at the back and susceptible to the swift counter attacks from the eager Bees. The game was on a knife edge. Would Leeds equalise before Brentford pinched another? Well Mr Silvestri certainly had the Leeds fans squirming as he over hit a pass to Cooper straight to a Brentford player who released Djuricin in the box who's shot hit the post when it was easier to score. At the other Wood hit the post after good work on the right. 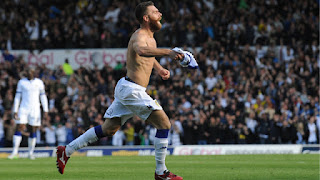 Leeds weren't to be denied though and on 75 minutes they got their reward. The hard working Cook chased a weak back pass to the goalie down and when Dallas dispossessed Woods suddenly Leeds had men over. Dallas slipped the ball to Wood who released Antenucci who curled a beauty past Button in the Brentford goal. Get innnnnnn! 1.1. The Italian got a yellow card for his celebration in front of the ecstatic kop as Elland Road came to life. Game on. Leeds were now in the ascendancy and the visitors were hanging on as the whites went for an unlikely win.

The Leeds crowd were baying for the winner as the clocked ticked past 80 minutes. More shots rained into the kop before Antenucci broke away in added time but his shot was comfortably saved by Button. The game ended 1.1 leaving both teams thinking they should have taken all three points. Dallas was my man of the match with Cooper also having a decent game. Bamba looked unusually shaky and Berardi gave his winger far too much space. Credit to Rosler and his team for turning it round in the 2nd half though. Silvestri had one of those games where nobody had any idea where his kicks were going to go and if I was having palpitations in the stand every time he came out for a ball god knows what his defenders felt. Byram got a bit of stick but I didn't think he had that bad a game..........but he's not the ideal winger.

The words "We're still unbeaten" could be heard a lot as he headed back down Elland Road to the car after a match where we snatched a draw from the jaws of defeat. Still work in progress for Rosler's team but we do look better than last season. I wonder if Rosler will go with Antenucci and the 4-4-2 system against Ipswich on Tuesday or will he stick with his favoured 4-3-3? Antenucci certainly makes a big impact when he comes off the bench. Bring on the Tractor Boys then. Will Botaka be fit? Will Dallas continue to improve? Will Mowatt have recovered? Let's see what Tuesday brings.

MOT.
Posted by Andrew Butterwick at 19:10

Thanks Andrew as always a great read from a Leeds fan in Singapore.

Win Draw Draw ..... Always a top read.
Really feel this is a game we would have lost last season and with a couple of players not firing just yet (Mowatt and Byram) we will improve and those wins are not far away.

Tony,
Agree we would have lost this last season. Fans just need to keep calm and let Rosler get on with it.
MOT