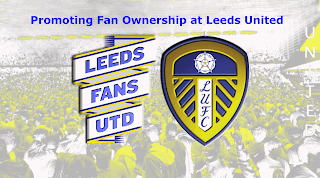 With all the turmoil and debate going on off the field regarding the ownership of the club I was relatively thankful for the promised outbreak of football at Elland Road as we welcomed Cardiff City to West Yorkshire. I say that tongue in cheek as after last Thursday's performance I was expecting nothing more than another humiliating defeat at the Theatre of Total Despair against a team we last beat in the year of the miners strike and the IRA's attempt to blow Maggie Thatcher up at The Brighton Grand. The Happy Chocker went with the pessimistic mood and wagered on a 3.0 win for the Bluebirds. It's fair to say that it was with a significant amount of fear and trepidation that I took my usual seat ready for the kick off. Would the players adapt to Mr Evans new tactics? Would Wood score? Dare I watch Silvestri come for crosses? All questions that darkened the mood further as the match got underway.

Steve Evans dropped Byram to the bench in favour of Wootton whilst Bellusci replaced the suspended Bamba and Mowatt stepped in for Adeyemi. The formation looked a bit lopsided with Mowatt out wide left especially with two wingers sat on the bench. A less than tuneful Last Post signalled the end of the minute's silence in remembrance of those who have fallen serving our country and then the game was underway in the swirling Elland Road mist.

The opening exchanges were tentative to say the least as neither side looked to take the initiative but after last week's eventful and devastating opening few minutes many in the 18,000 crowd were just happy to see Leeds not concede an early goal. There was more endeavour and purpose in the Leeds play though and as the half progressed they slowly gained in confidence as Cardiff seemed happy to sit deep and wait for the counter attack. Once again the final ball was Leeds downfall as potential chances came and went with frustrating and usually snatched final passes going astray and as for set pieces I lost count of the number that didn't go anywhere near a Leeds shirt. The home side kept plugging away though and when Dallas tested Marshall in the Bluebirds goal on 40 minutes the crowd sensed this just might be Leeds United's night. Leeds ended the half slightly the stronger against a distinctly average looking Welsh side. The applause that greeted the half time whistle was generous for the hard working working home side.

The Urinal Philosophers, who could soon own the club, were happy and pleasantly surprised with the turn around from last Thursday's dreadful performance. "even Bellusci's playing well" one shareholder commented whilst another thought "why play Mowatt on the wing with two wingers on the bench?" The final pundit summed up the half well "If only we could hit a decent final ball we'd be two or three goals up" With the scores level there was everything to play for in the 2nd half. 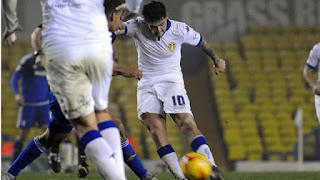 The 2nd half started with Cardiff twice winning headers at corners that had me wincing as I peered through the mist at the action in front of the South Stand. The game was following the pattern of the 1st half though. What it needed was a flash of quality to spark it into life and just past the hour we didn't just get a spark we got an almighty explosion that will be long remembered by all who there to witness it. The much maligned Wood fought for a long clearance and his partner in crime Antenucci recovered the scraps before shovelling the ball sideways to Mowatt who had drifted in off the wing. The young left footed midfielder took one touch and from fully 35 yard out hit an absolute screamer past the motionless Cardiff goalie into the top corner as Elland Road erupted in wild celebration. What an absolute beauty! 1.0 Leeds.

Elland Road was now alive and kicking. There might only have been 18,000 inside the ground and the club in absolute turmoil but that didn't matter one iota. That addictive and heady feeling of witnessing a wonder goal putting your side in front out of the blue surged around the old stadium like wild fire less than a week after the same fans were spitting vitriol at the same players who had meekly capitulated against Blackburn. Football is a funny old game.

The shackles were off Cardiff now as they opened up looking for the equaliser. Silvestri pulled off a fine save from Joe Mason and minutes later thankfully grabbed a goal bound header to calm the home fan's nerves. The giant Jones came off the bench for the Bluebirds to test the resolve of the Leeds back four. Bellusci and Cooper were doggedness personified though even if the Italian did try to kneecap Scott Malone with a ludicrous tackle with 25 minutes to go. Lewis Cook was like a human dynamo as he feverishly patrolled the midfield area like a sheepdog on speed herding his flock. Sam Byram replaced Dallas for the last 10 minutes. Cooper found him with a long free kick and the young full back danced his way to the bye line before finding Marshall in the Cardiff goal with his cross.

The nervy final minutes consumed the eager home fans willing Leeds onto a first victory since March. Chris Wood spurned a golden chance to seal the match when he chased down a hesitant Cardiff defender and robbed him inside the box..........he then slipped the ball past Marshall to leave himself only a solitary defender between him and the goal.............all the negative comments he was getting were about to be buried as he scored the killer 2nd goal...... but he unbelievably hit the ball into the side netting. Bollox! Thankfully Leeds survived 4 minutes of added time to record an all too rare home win to the delight of the fans, team and manager alike. Steve Evans was straight on the field celebrating with his players and the fans. Fantastic! So the latest Leeds Head Coach, who looks more like a coach driver than a Head Coach, got his first win and laid a 31 year bogey against the men from Wales. Not a bad night's work.

Cook was my man of the match in a hard working dogged team performance. Bellusci and Cooper were solid at the back which will give Evans a selection head ache when Bamba becomes available for the Huddersfield match on Saturday. Mowatt's goal really was a class strike that will not be bettered this season. So it's it's onwards and upwards towards Huddersfield for the Saturday lunchtime kick off with a spring in our step...........something that seemed impossible after last Thursday's debacle! Will we have new owners by then? Will any new loanees be signed up? Will the Coach driver change a winning side? Roll on Saturday!

Posted by Andrew Butterwick at 23:50

Thanks Andrew. Nice to read a report with a sense of optimism at the break rather than only despair. Just watched the highlights, how did Wood miss form there!!!

Top work again Andrew, great to be back reading a post that involves a win for the Whites. And what a goal from a player who I thought was struggling this season. Roll on Saturday !!

Thanks for the comments Andy and Tony.
Now for the Tesco Bags!
MOT