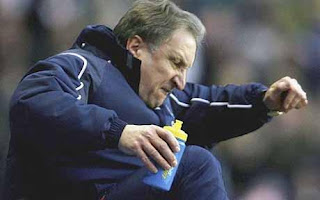 After the ludicrous Black Friday event I was looking forward to a White Saturday as we boarded the train and headed south to the capital for our clash with QPR. Thankfully our decent form away from the Theatre of Despair gave some hope of success against Mr Warnock's expensive under achievers as we debated team selection and other matters Leeds whilst gobbling up the miles towards London. Will Taylor be back? Will Byram fight Coyle off for a place on the bench? What will the latest loan signing be like? Can Leeds withstand 90 minutes of the opposition playing their socks off without fault? Oh I do like a good old fashioned London awayday.

The team news filtered through as we got to Loftus Road. Byram was still on the bench, Wootton somehow still at right back and Murphy made way for Bridcutt. Charlie Taylor replaced the suspended Berardi. Even the substantial pre match refreshments we'd consumed couldn't disguise the concern in persevering with Wootton at right back together with throwing Bridcutt straight into the team without any game time this season. At least the dangerous Austin was on the bench for QPR and not starting. Still we squeezed into the away end along with the other 3,300 masochists and the game was under way.

Bridcutt was soon in the action as he chased back and robbed Hoilett of the ball on the edge of the box but the ref amazingly not only gave a free kick to the home side but also booked the Leeds debutant. Thankfully the free kick sailed into the massed bank of Leeds fans behind the goal. The game was scrappy and disjointed reflecting the league position of both teams. Leeds struggled to get any fluent passing movement going but were defending well when QPR attacked. Charlie Taylor soon reminded the Leeds faithful what they had been missing during his absence with a number of timely tackles and clever interceptions. Leeds first chance came after 25 minutes when Cooper released Wood with a ball beyond the QPR high line defence. Wood coolly rounded goalkeeper Green.............shoot ffs........but no he then took another couple of touches and ended up blasting over the stand from four yards out. The reaction from the travelling support was understandable. Safe to say his reputation as a striker who doesn't score was massively enhanced.

QPR were dominating the game though and it was only some last ditch blocks and tackles from the over worked Leeds defence that prevented Silvestri from being peppered with shots. Half Time 0:0 but Leeds rushed off the field like a boxer desperate to reach his corner to recover from a volley of body shots that were sucking the energy out of him. Leeds had not been in the game in the first 45 minutes with a tendency to play without any width and rely on the long ball out of defence. Very frustrating because the home side were not a lot better than the mis-firing Yorkshiremen. Still there was always the half time team talk to freshen things up a bit?

Both Dallas and Antenucci had "attempts" on goal in the first 5 minutes of the second period which injected a small dose of false hope into the veins of the long suffering away fans. That hope lasted about two minutes as Warnock sent on his star striker, Austin, at the 56 minute mark to the accompaniment of the sound of 3,300 clenched buttocks in the away end. Charlie Austin is lethal in the championship and the thought of him rampaging through our brittle defence sent shivers down my spine. My worries were almost immediately justified as he nearly latched onto a through ball but Silvestri came to the rescue. That was only a short stay of execution though. The very next attack QPR waltzed through the open spaces that the right back would normally patrol but with Wootton in that position the home side had no problem in firing in a teasing cross deep into the Leeds box where thankfully Taylor diverted it behind for a corner. Now if you were defending a corner against one of the top guns in the championship you'd normally put your best defender on man marking duties wouldn't you? Well not at Leeds United........in their infinite wisdom they allowed Austin to make a simple run across the box and head unchallenged into the net with his first touch of the ball. Bollox and double bollox! What were they thinking about? 1.0 QPR.

From there on in Leeds were doomed Silvestri kept the score respectable with two stunning saves but the sheer ineptness of the Leeds performance just increased the longer the game went on. Wootton just got worse each time he touched the ball but still Byram sat on the bench. Botaka and Erwin did replace Mowatt and Antenucci but apart from a late surge to the bye line by Dallas and a ball across the six yard box Leeds offered nothing in attack. The game ended at 1.0 with boo's spitting out of the fuming away end.

Leeds were simply atrocious from start to finish playing with little apparent direction. They had no width even when Botaka came on he seemed to play as an inside forward. Wood was awful again and as for Wootton I can't find words that would do justice to his performance. If Byram is out of form that much that he couldn't do better than Wootton then he must have had his legs surgically removed. Bridcutt understandably struggled in his first start but what do expect when you bring in a Sunderland reject who's had next to no game time this season? The only bright spots were Charlie Taylor and Silvestri.

The long journey home was painful. With performances like this we are going only one way and it's not up the table. The fans sang Byram's name loudly followed by a heartfelt chorus of "We're f****** shit" much to the amusement of the home fans. These are dark days for Leeds with the chaos off the field dragging the club down to new levels of despair and embarrassment. The team isn't good enough neither is the manager but most of all neither is the mad owner and his entourage in running a football club. God knows were this will all end for our famous old club but I really fear for what will happen before the end of the season.

Posted by Andrew Butterwick at 23:13