The Pennine hills were capped with snow as I headed south down the M1 for the lunchtime kick off with Sheff Wed. This Yorkshire derby between two teams who have both been exiled from the Premier League for over a decade is the biggest White Rose clash of all the Tyke derbies so not surprisingly the atmosphere at kick off was approaching boiling point. Evans had recalled Dallas and Murphy to the team in favour of Byram and Mowatt from Tuesday's team. There wasn't a huge amount of optimism oozing from the away end as the game got under way due to a mixture of the home team's impressive home form and our decidedly inconsistent performances during our recent unbeaten run.

Although Wednesday had the first chance when the dangerous Hooper headed over a cross from Wallace it was Leeds who looked the brighter in the opening twenty minutes. Twice Doukara fired in shots at the Wednesday goal either side of a good length of the field run by Dallas which finished with a save from Lewis in the home goal. Just maybe it wasn't going to be a bad day after all? Dallas and Bridcutt were enjoying good possession as Leeds started to get the better of their lofty opponents. The Owls were flustered by the Leeds approach and reverted to some less than honourable methods of stopping the Leeds flow. Key architect for this tactic was Hutchinson who tested the ref's patience once too often on 33 minutes when he scythed down Carayol with the finesse of a well tuned Combined Harvester as the Ghanaian skipped away towards the box. Bastard!

Cook was the next Leeds player to find himself free and hurtling towards the Wednesday box but his final shot skimmed past the post. Bellusci then evened up the yellow card score when he chopped down the wonderfully artistic Foresteiri as lent into the Leeds centre half. Leeds pushed for the opening goal as the half came to a close with Wednesday scrambling the ball off the line from a Doukara shot. Half time 0.0 and Leeds more than holding their own against the high flying Owls. All we needed to do was continue in the same vein in the 2nd half and convert at least one of the chances that were coming our way. Mmmm! 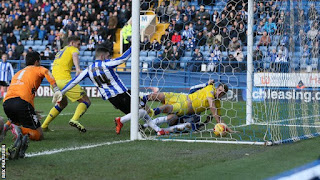 Leeds are nothing if not frustrating. For the first 45 minutes they went toe to toe with the home side and rattled them. Within 5 minutes of the restart they were 2 down after two very soft goals. First Silvestri played safe and gave a corner away from a shot that seemed to be going wide then after the Leeds defence had time to clear the corner the ball somehow popped back into the 6 yard box for Hooper to pop the ball home for the opening goal. Hillsborough erupted on three sides of the ground whilst the away fans stood in silence ruing yet another soft goal given away by the mighty whites. They didn't have to wait long for another comedy of errors as Murphy lost the ball to Foresteiri on the half way.........The Wednesday forward ran unchallenged to the edge of the box before firing a shot goalwards............Silvestri spilled the ball and Hooper tapped in for 2.0 to the Owls. FFS where was the challenge? where was the follow up to the shot? Absolutely nowhere! Leeds now had the proverbial mountain to climb against a team who had just been gifted two shots of confidence and were now playing like a top 6 side.

A frustrated Lewis Cook harvested a yellow when it probably should of been a red for a rash challenge on Hunt as Leeds imploded. Wednesday turned the screw and it was difficult to see how Leeds were going to get back in the game. On 70 minutes Mowatt's appearance in place of Carayol seemed a bit puzzling given we needed at least two goals to save the game but he was quickly followed by Antenucci in place of Murphy. The bearded Italian nearly had an immediate impact as he latched onto a volley outside the box but his goal bound screamer was blocked. This lifted the disgruntled away support who fed on the faint possibility of Leeds getting back into the game.

On 77 minutes all hell let loose. Doukara won a free kick to the right of the box. Mowatt trotted over to take it. Meantime Wednesday made a substitution. Foresteiri walked off at the speed of a geriatric snail. The referee who was in the box ready for the free kick turned and looked at Wednesday forward and must of thought they'd changed their mind as he was almost stationery in the centre circle. He then blew his whistle for the free kick to be taken and waved play on. Mowatt free kick......Cooper bundles the ball into the net....Leeds fans go mental as the ref signals for the goal and heads back to the half way. Wednesday players surround the ref, despite the fact that they played on as well, and ushered him over to the 4th official. After discussions with his colleague the ref then disallowed the goal! Unbelievable. The atmosphere turned nasty in the away end with seats being smashed by furious fans. It wasn't going to change anything though it was still 2.0. From the retaken free kick Wednesday cleared the ball off the line. "The Football League's corrupt" boomed around Hillsborough as the home fans danced with delight at avoiding what would have been a very  nervy last 10 minutes. Bollox.

With that bizarre decision went Leeds last realistic chance of saving the game. The match finished 2.0 to the Owls and back to back defeats for Leeds. All the talk was about the disallowed goal as the fans streamed away from the stadium but even the ref's flawed decision couldn't mask the failings from the Leeds side. Chances missed and soft goals conceded are not a very successful mix if you're wanting to win football games. I thought Doukara had a better game but too often he was outside the box when he should be inside. Dallas and Bridcutt battled well but our finishing was poor. Not a good week on Planet Leeds.

Bristol City up next at Elland Road. Will we have secured new blood at centre half or forward? Will Wood be fit? Will Steve Evans pick up a ban or fine for his factually correct but damning assessment of the referee? Don't you just love being a Leeds fan?

MOT.
Posted by Andrew Butterwick at 17:10

Thanks Andrew as always an excellent review of the game that I unfortunately got to watch on TV.