The West Yorkshire derby with our friends from down the A62 is always an intriguing one and today was no exception. Leeds, on the back of a surprising 3 match winning run, go into the game as favourites against a Huddersfield side sitting precariously above the relegation precipice with just 6 nervous points between them and Rotherham and the dreaded bottom three. Huddersfield's new coach, Wagner, has changed the tunes since replacing Chris Powell and whilst their style of play is now more Germanic in it's approach the results have not been what the Terriers would have wanted. Local derby's are all about local bragging rights though and this West Yorkshire clash is no different. Could Steve Evan's men continue their winning streak and send Wagner's team back to Happy Valley with their tails between their legs? We were about to find out.

Just short of 30,000 fans had descended on Elland Road for this local derby and the atmosphere inside the ground as KO approached was tingling. Steve Evans's team selection puzzled many amongst the home fans as he dropped two of the midfield that were so impressive against Blackburn in Cook and Diagouraga in favour of Murphy and Dallas. Maybe Evans had spent the week dissecting DVD's of the way Huddersfield play and tweaked his tactics to accommodate them. Or maybe he is just nuts and loves tinkering with his team each week. The vast majority of fans in my earshot thought the latter.

The game started with all the hustle and bustle you'd expect in a local derby as plenty of "robust" tackles flew in from both sides. Huddersfield gained the early initiative as their wingers clung to the touchline to stretch the narrow Leeds midfield as young Billing strode about in a deep lying midfield role with no pressure from his Leeds counterparts. The pressure was on Leeds and when another Town youngster, Lolley, danced dangerously into the box on ten minutes Bamba's outstretched leg brought him crashing to the turf. Penalty Huddersfield. The away fans were besides them selves with joy.............that is until Silvestri saved low to his right from Well's penalty. "Du Du Da Da F****** useless" taunted the South Stand to the crestfallen Town striker. The penalty save lifted both the crowd and the home team as at last they started to string some effective passes together. Bamba went close from a corner in front of the baying kop as Leeds enjoyed a purple patch of dominance. Their positivity was soon to be rewarded. 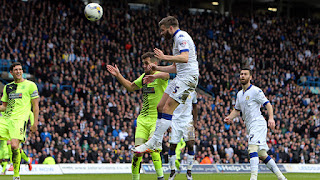 Bridcutt battled for the ball in midfield and robbed a Huddersfield player before driving towards the Town goal. After an interchange created space he pinged a lovely cross to the back post where Dallas was on hand to head the perfect goal. Get innnnnnnnnnnnn! 1.0 Leeds and all was well with the world. Maybe Steve Evan's master tactical switch was going to work after all?  For the next few minutes Leeds strutted their stuff and threatened to capitalise on Town's fragile confidence after such a poor run of results. But gradually the visitors regained their composure and once again applied pressure on Leeds. Billing, who seemed to have been awarded the freedom of the park by Leeds, tested Silvestri with a low shot. The warning bells were ringing loud and clear for Leeds but nobody was listening.

On 41 minutes Leeds had to listen. More laid back play resulted in a Town corner. Paterson swung a delicious ball into the box for Mark Hudson to lose his marker, if in fact he had a marker, and head home the equaliser. The 2000 visiting fans exploded with delight. 1.1. This led to a hectic finish to the half. Billing's header crept over Silvestri's bar. Bellusci tried a ridiculous shot from a free kick when he could have dinked a dangerous ball across the Town goal and finally Dallas whizzed two shots away within a minute the second one just inches over the bar. Half time 1.1. Nerves were taut after an even first half. The urinal philosophers were quiet. "That was awful" one fan announced, not sure whether he meant the half or the pie he'd just had whilst another pondered "Remind why he changed the team from last week"? Good question which I certainly couldn't answer.

Huddersfield started to dominate the 2nd period as Leeds didn't seem to have any answer's to the Town wingers, Lolley in particular. Leeds were in huff and puff mode which meant when they did get possession they tended to give the ball back almost straight away. The game was like an Anadin advert, tense and nervous, more so for the home fans who were beginning to fear the worst even though the score was still 1.1. Leeds were just not closing Town down enough and suffering from their season long problem at home "How do we break down a side that gets men behind the ball?" On 65 minutes Cook replaced Murphy just in time for Town to take the lead. An unnecessary back pass to Silvestri after some classic going nowhere passing between the Leeds midfield forced the goalie to concede a corner under pressure from Wells. Leeds failed to clear the corner properly and Bunn volleyed the ball back through a cluster of players into the net. 2.1 Town and the away fans were now ecstatic.

Leeds heads visibly dropped as what followed can only be described as a humiliating capitulation. Bellusci lost the ball on the half way line. The ball was knocked through to the now unmarked Wells who ran into the box and set up Matmour for a tap in. 3.1 Town. Wells got a fourth four minutes later as Leeds fell apart in spectacular style. Silvestri saved Leeds from further embarrassment before the game ended in front of an empty stadium with the score at 4.1 to Town. Absolute Bollox!

Why do Leeds always do this to you? Why did Evans change his winning team? His explanation on Radio Leeds was as confusing as an explanation of how quantum physics works. Why can we never perform in front of big home crowds? Tactically we were naive at best today. If the opposition play two wingers wide then playing a narrow midfield 3 is never the answer? If the opposition love to play from the back with a deep lying midfielder surely you need to press them to force errors? Leeds are frustrating to watch at the best of times today was just another horrible, horrible example of how the mighty whites can completely ruin your weekend in just 90 minutes. I am fast joining the body of opinion that Steve Evans is somewhat out of his depth at this level. Credit to Huddersfield though. They came with a game plan and some nice passing football that destroyed Leeds.

Thankfully we have two week to recover. I'll have a bit longer to recover as I will be in sunnier climes when we play Mr Warnock's resurgent Rotherham at the New York Stadium. That could be another messy one for Leeds. I hope not.

MOT.
Posted by Andrew Butterwick at 20:47