After another embarrassing and farcical week off the pitch on Planet Leeds it was good to see the focus back on the Football at Elland Road...........if only for the 90 minutes. Reading were the visitors to The Theatre of Desperation as Steve Evans' men went in search of a second win in a week. With Leeds virtually guaranteed Championship football next season and the visitors hardly the sort of team who get the pre match juices flowing there was a subdued mood as we trudged down Elland Road towards our usual seats in the stand. The Anti Cellino march from City Square caused a stir along with the PR team from Peperami who were dishing out free samples of their wares aided by the Peperami Mascot who resembled a rather large Phalanx as fans clamoured for a selfie with the angry looking Dick.

We were glad to get to the sanctuary of the bar and out of the chill wind to digest Evans latest team selection. Apparently illness had ravaged the Leeds squad accounting for absentees Bamba and Carayol. Bellusci returned to the centre of the Leeds defence. 20,000 fans had turned up for this meaningless end of season game hoping for some stress free entertainment. Mmmm well with regards the first half let's just say it wasn't what you'd call exciting. The "highlights" of an error strewn first 45 minutes were a decent one on one Silvestri save and the Reading centre half, Hector, walking the ball into the net unchallenged for the opening goal after yet another woeful attempt at defending a set piece from Leeds Utd. Hector celebrated by gesturing to the South Stand during his weird goal celebration. Not the cleverest thing to do with more than half the game to go especially to the end Reading had to defend in the 2nd half. In truth the first half was dire with more than the odd player's mind seemingly focusing on some exotic beach rather than the game in hand. Half Time 1.0 Reading.

The Urinal philosophers were in an apathetic mood. "I can't even be arsed to get upset any more" bemoaned one fan referring to the lack of marking for the Reading goal. "Man of the match so far is that f****** Peperami mascot" another dissatisfied fan chuntered. "How many games have we left" enquired another grumpy fan as he left the Gents and made his way back for the 2nd 45 minutes. What we needed was something to spark the game into life. Within 3 minutes of the restart we got it.

Evans had clearly exercised his vocal chords at half time as Leeds restarted the game with a much needed burst of energy. Cook had moved into the centre of the field rather than the wing position he'd started with and suddenly Leeds looked dangerous......A quick ball into Wood 35 yards out, lovely control before picking Berardi out on the right flank where the Swiss international swung a perfect cross onto Diagouraga's head and into the net. Simple. 1.1. Now that wasn't difficult was it? Could Leeds keep up the momentum though? Well the answer to that was very much yes. Taylor soon exchanged passes on the left and found space to zip in a near post cross where Wood hurtled in only to see his header flash wide. Reading were rocking and with Hector now getting some interesting feedback from the South Stand surely it was time for Leeds to get a grip of the game? 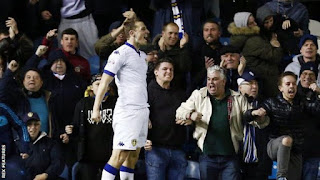 The game remained at 1.1 as the clock ticked past the hour mark. Phillips replaced Diagouraga and soon he was striding onto an Antenucci pass on the edge of the box but his shot was blocked. But Leeds weren't to be denied. Taylor again found space on the left..............his trusty left foot pinged another cross onto Wood's head and despite the striker not getting a perfect header the ball found the net and Leeds were in front. Elland Road was rocking and Hector now looked like a baby Gazelle with a Pride of Lions behind him baying for blood. 2.1 Leeds. In true Leeds fashion there was still 15 minutes left to not close the match out and stroll to an easy win.

Reading pushed for the equaliser mainly down their left flank. Rakels went close  with a header as Leeds continued their generous style of defending where they give opposing forwards time and space. On 81 minutes they paid a heavy price. While Leeds were arguing about another dubious ref's decision over a throw in Reading scored another sloppy goal. Leeds had at least three chances to clear the ball as it pinged about in the box before Rakels scored with a simple shot from 6 yards. Sunday League defending at it's very best. 2.2.

For once though Leeds weren't finished. With just 5 minutes remaining Wood pounced on a catastrophic stumble by the Reading centre half and glided into the box before sliding the ball past Al-Habsi for the third Leeds goal of the half. 3.2 Leeds and Elland Road was bouncing. Wood should have had his hat trick minutes later as Cook placed a lovely reverse pass into his path but the big Leeds striker fluffed his shot with just Al-Habsi to beat. The final action saw the beleaguered Hector try to make amends with a late shot but it was blocked and Leeds ran out 3.2 winners.

The 2nd half gave us some unexpected excitement in what was a dead rubber of a game. Two very average teams though. Leeds move up to the heady heights of 12th after this victory. Wood was my Man of the match for his hard work and two goals. Remarkably this game marked a milestone for Steve Evans. He is now the longest serving Head Coach under Cellino. Who'd have thought that when he was appointed? Funny old game isn't it?

Wolves up next on Tuesday. Can we notch 3 wins on the bounce?

Posted by Andrew Butterwick at 20:25