Seems like ages since we had a match to go to and even longer since a league match but tomorrow we make the long trip to the Seaside home of the Pink Pound and the awful Withdean Stadium, home of Brighton & Hove Albion. What a difference a year makes though? A year ago we were in the midst of post Histon depression and at our lowest ebb. Form had gone out of the window and Gary Mac's tenure in charge was heading for the buffers as the team's performances went from bad to worst. Contrast that with the fact that we will be looking for a hat trick of straight 4:0 league wins when we take the field at Brighton and we sit proudly 4 points ahead and a game in hand at the summit of the table. Life is good on planet Leeds!
The only worry for me about the game is Brighton's appointment of our erstwhile coach Mr Poyet as their new manager. He always appeared to be the driving force behind our limited success when the poison Dwarf, yes that's you Denis, was in charge at Leeds and he's made an immediate impact on the South coast culminating in their fine win against Southampton last week. Gus will be working hard to plot our downfall but in Grayson we trust and I'm sure he is more than a match for the Uruguayan one when it comes to tactics and motivation. So whilst I can't quite see another 4:0 coming our way a repeat of the 2:0 victory on our last visit to the Withdean is a distinct possibility. Talking of which that was the game that Mr Delph scored a stunning goal after running the length of the field. Funny he doesn't get a mention now isn't it? Has he been missed? Probably not as much as we thought and I just wonder if he feels he's made the right move as he plays in the stiffs at Villa and gets an odd outing on the bench? 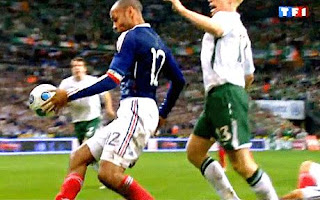 We've all been talking about that Henry goal this week, apologies to our Irish friends for resurrecting grief, but what an appalling miss from the officials? Surely video ref's will now be part of next year's World Cup? I thought Gillette's finest had a cheek after the match going to the Irish and commiserating with them? I think if I were Richard Dunne I'd have lamped him one instead of hugging him...........................I also feel sorry for the majority of French fans because they must feel in some way cheated as yes they may have got to the finals but only by cheating. Where's the honour in that? I'd feel embarrassed if it was England.
So a long trip starting at Selby station first thing. Pints, pies and quizzes on the way down, Followed by more pints with friends when we get there and three more points to bring home. Sounds like a good weekend to me? Can't wait.
MOT
Posted by Andrew Butterwick at 18:02