With all the euphoria of Leeds' fantastic recent FA Cup exploits it could be easy to forget that promotion is this seasons main priority. So a 16 hour round trip to the lesser known St James Park, home of the mighty Exeter City, was just what was needed clear the mind of all thoughts of Beckford's goal at the Theatre of Shite. With Norwich City on the crest of an impressive unbeaten run breathing down our necks all of a sudden our stranglehold at the summit of the league was in question so today's clash with the Grecians was the latest of this seasons crucial matches.
With the Happy Chocker ticketless, Big Steve, GB, Rhys and Nath and Beefy joined me on the cross country train to Exeter. Deceptively bright weather greeted our motley crew as we spilled onto Exeter station. No massive Police presence here, just a single constable who didn't really know the best way to the ground. Mmmm! A short taxi ride later we were at the compact home of our hosts. Stood on the open terraces with a watery sun beaming down it was positively tropical in comparison with the recent triple Baltic weather. Steve Perryman passed in front of the Leeds fans and was pleased to sign autographs for amongst others, beefy. The ex Spurs midfielder was clearly glad some fans have long memories! 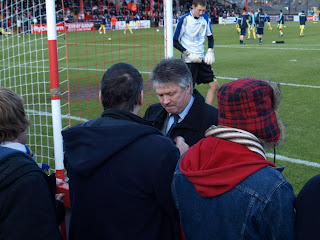 Howson slid to the bench for the start of the game. The pitch appeared to have the same qualities of a rice pudding as the teams warmed up. Still the groundsmen had down a good job in getting the game on and we had travelled a long way to watch Leeds get another 3 points so let the fun begin.
The first spots of rain fell as the game kicked off. Exeter, playing with 5 in midfield on a very tight pitch took the early initiative and were 1 up within 4 minutes. Somehow Exeter found acres of space on the right flank and an inch perfect ball was floated onto Harley's head who rose unchallenged from 7 yards to plant a peach of a header past a static Casper. The majority of the capacity crowd went into raptures as the large away following fell silent. That was apart from the unfortunate Leeds fans who were still trying to get into the ground through the two turnstiles. Chaos then ruled as fans spilled onto the pitch to avoid the crush and try to get the less populated area of the away terracing. The tannoy man asked if all Leeds fans could move to their left to ease the congestion! Has he ever stood on a football terrace? For a further 15 minutes a combination of the Police and stewards tried to resolve the situation. Believe it or not the initial strategy was to inform all the fans outside that the ground was full and they couldn't come in......................not the best idea when the 100 or so fans had tickets and had travelled 250 miles to the game! 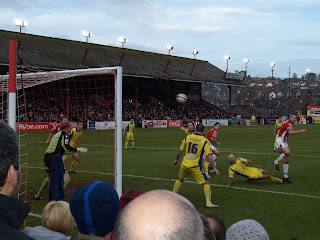 Back to the game and Leeds were doing nothing to inspire their loyal fans that the early goal was a blip that would soon be rectified as the home team were first to most of the second balls and somehow seemed to be able to pass to a team mate...............a facet of the game that Leeds were sadly lacking. The rain began to soak the away fans and worsen the pitch. Leeds tried to get their game going by utilising their short passing game but time and again it came unstuck on the increasingly glue like pitch. In contrast Exeter were playing the ball down the channels for their will ing strikers. The veteran pensioner Marcus Stewart looked dangerous every time he went near the ball. That's how bad it was.
Casper thwarted Exeter as he tipped the ball from the feet of Stansfield and then made a terrific save from a deflected cross. The words remember Histon floated around the disgruntled, wet Leeds fans as the pitch got wetter and the Leeds performance got worse. We had enough possession but we didn't seem capable of coping with the difficult conditions. This couldn't be the team that made the Salford yanks look 2nd rate a mere two weeks ago?
The half time whistle blew and Leeds' only threat had come from a couple of long throws into the box despite have the better share of possession. The underwhelmed away fans were not in the best of moods.
Still In Grayson we Trust and his HT pep talk and change of tactics gave us hope. He matched up the home 5 in midfield by pushing the ever willing Hughes forward. This sparked Leeds and they started on the front foot. When Beckford rose and headed inches over early in the 2nd half I though just maybe we could recover something from the car crash of a match as we'd done at Walsall. One thing that did worry me was the pristine state of the home goalies violent Orange strip despite the wet muddy conditions. This told a story better than any other statistic!
But Leeds are nothing if not persistent and despite a stuttering performance they did start to test the keeper as Bromby, Beckford and Johnson were denied by the assured, clean keeper.
The match got niggly as tackles on both sides optimised the bad conditions to make some bone shattering collisions.
Mad Max was thrown on together with Howson replacing Naylor as Leeds pushed for an equaliser but in reality it never looked like coming and it was no real surprise when Harley planted a superb drive past a static Casper to seal the game. 6 minutes of added time couldn't save Leeds from falling to only their 2nd defeat of the season. 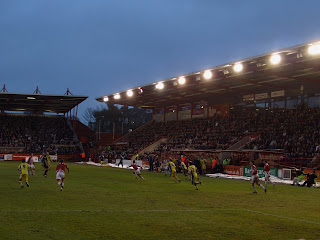 The walk back to the station in the driving rain matched our mood and once inside the dry Western Hotel we reflected on the match over a pint and baguette and chips. GB wished he'd stopped at home with his precious X Box & we all questioned our sanity in travelling such a distance to watch such a dire performance. Don't think anyone in a Yellow shirt could have been happy with their performance. We were reduced to just pumping high balls for the Exeter defence to gobble up like hungry pigs. We never got a grip in midfield where the home sides tactics of pressing and not letting Leeds settle on the ball worked a treat in the difficult conditions. Up front Becchio was disappointing, Beckford worked hard but the service to him was all but non existent. Definitely a bad day at the office but certainly not terminal. It is a worry that we have yet to win since the triumph at OT and probably more to the point we've looked 2nd rate against two of the teams floundering at the bottom of the league. On the positive side we are still 3 points clear of Norwich with a game in hand and 6 points clear of 3rd placed Charlton..........I would have definitely taken that at the start of the season, but if Norwich beat Brentford at home on Saturday we will kick off against Spurs 2nd in the table on goal difference.
Comedy moment of the day occurred very late in the day as the train stopped at Sheffield. A love struck couple were saying their goodnights in front of our carriage carrying a number of tired & grumpy Whites fans. As the girl dashed onto the train still waving to her heartthrob stood on the platform a spontaneous and less than tuneful version of the Three Degrees song "When will I see you again" erupted from the now happy whites fans. Awwwwwwwwwww!
Tuesday's game against Carlisle in the Paint Pot trophy is the next crucial game on our list. Any thing less than a commanding win will have the worry mongers in the legions of Leeds fans going into overdrive.
Don't panic Mr Mainwaring!
In Grayson we Trust (if not just slightly less than we did before the game)
MOT
Posted by Andrew Butterwick at 09:48