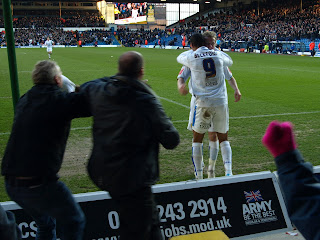 The capture of McSheffrey from Birmingham City on loan until the end of the season had lifted spirits amongst the plentiful whites fans on Selby station awaiting their carriage to fortress Elland Road. "Will he play him from the start" and "what about this Aussie we've got from Villa" was the main topic of discussion. Will McSheff go up top with Becks at the expense of Becchio? Lot's of deep and meaningful discussions on the subject mixed with the cackle of partying girls filled the carriage as it trundled into Leeds station.
True to his style of keeping his cards close to his chest Lord Grayson sprung a surprise with the team sheet.............Kissy, Hughes and Killa were all missing through injury so McSheff and the young Lowry both started with Nayls returning to the heart of the defence with Lubo. Bromby at full back made up an entire back 4 of centre halves. My pre match confidence took a dip especially with the prospect of such a changed back four. Neil Kilkenny was on stage in the members bar explaining that he will be out for at least a week with his injury but he'd every confidence in the lads arresting the recent blip with another home win. Mmmmm all of a sudden our strong position in the league looks vulnerable........nothing less than a win today would do.
So with bright sunshine streaming onto the East stand the game kicked off................it was bloody cold though!
The first 10 minutes were nervy. Leeds took time to settle and a big well drilled Colchester side weren't in the mood to make things easy for us. Beckford looked bright up front but it was the Essex boys who were having more joy going forward. Ifil showed enough skill to earn him an equity card as he went to ground after a strong tackle from Lubo. Thankfully the ref waved play on. Pretty much about the only decision he got correct in the first half.
As the half progressed Leeds began to gain control and the linesman's flag saved the U's a couple of times as new signing McSheffrey started to show glimpses of his Premier class. Mickey Doyle seemed to be thriving with the new midfield line up and he was the next Leeds player to test the Col's goalie. Casper dealt with a weak free kick easily as the U's early attacking vigour evaporated. "I can feel a goal coming" I speculated and sure enough I was soon proved right. Becchio surged into the box and was brought down recklessly...................the Colchester defence must have been watching Mr Dawson for their inspiration..........and up stepped Jermaine to dispatch his 2nd penalty of the week. 1.0. Didn't we used to be crap at penalties?
Leeds were now moving through the gears nicely and we were so nearly 2 up minutes later when McSheffrey glided beyond the defensive line to pick up a sweet pass from Beckford only to be denied by an excellent save from the visiting goalie. Leeds trotted off at half time well pleased. McSheffrey had shown some nice touches and no little pace from midfield. Lowry had painted a solid picture at left back whilst Lubo, Howson and Doyle were all showing their finest skills.
It got better as the 2nd half started................soon McSheff was breaking at pace from defence and running the length of the field before picking out Becks who was just offside. Snoddy was running around as if someone had stolen his Haggis hunting down the ball as Leeds moved into attack mode. The 2nd goal came when Howson turned his man in the box and fired a shot onto the post......................who do you think was there to poach the rebound? The revitalised Mr Beckford. Much celebrating in front of us and game over. The blip was very much over!
Better was to come as Snoddy teased their left back before popping up a perfect cross for Becks to head goalwards, the goalies save just gave Jermaine the chance to hit a spectacular rebound into the net. Somehow the officials chalked it off for offside?
The only downside of the afternoon was the departure of Lowry with an injury. He'd had a very solid game and given Leeds much needed balance on the left hand side together McSheff. Not long after our new midfield star gave way for mad Max to have a final cameo. An impact player he is and befitting of this he nearly made it 3 after Beckford set him up only for a strong drive to be turned round for a corner by the busy goalie.
In the end a comfortable 2:0 victory with good hard working performances all round the pitch. The only slight downer I would have is with Becchio. Too many times he goes to ground and seems to have stopped holding the ball up preferring optimistic flicks.
My cold feet along with 23,500 other pairs streamed out of the ground happy that the minor blip in form appears to be behind us. Lord Grayson has steadied the ship and brought in two excellent new faces to help the cause. 5 points clear of 3rd placed Charlton and a game in hand is a satisfying position going into Febuary.
On the way to the ground I overheard a Leeds fan slating Beckford......"he's rubbish......yes he's scored in the FA Cup but that was against poor centre halves.......I'd sell him and take the money" I wonder if he cheered when he bagged his two "lucky" goals today? Just shows how opinions can vary?
So bring on the Spurs and a full Elland Road on Wednesday. Anything is possible with Beckford in this mood I wouldn't rule out another FA Cup shock..........after all he'll be playing against one of those rubbish Premier League centre halves again!
Can't wait.
MOT

Posted by Andrew Butterwick at 19:08

Phew, what a relief. was the performance, THAT good MOT?

I thought McSheffrey was older, but 27? thats a perfect age. Didn't he score loads of goals for Sheffield Wednesday? And was he on the left or right today? I always thought of him as a centre forward.

Peter,
McSheff didn't play for Wednesday. he played with Coventry before Brum. he is small and left footed. Played on left midfield for us yesterday and looked a different class. he has plaed up front but presumably alongside a bigger holding forward. He made two or three surging runs from midfield showing impressive pace. Definitely a good signing.
MOT
http://en.wikipedia.org/wiki/Gary_McSheffrey