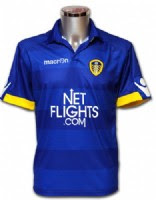 So the pre season games are over and the first league weekend of the new season is upon us.  The anticipation has been building for a few weeks now helped by new signings, good and bad performances in the friendlies oh and a 2nd rate competition in South Africa.  The momentum gained by what looks like a successful pre season was evident at ER last week as Mick Mcarthy's charges were ripped apart by a rampant Gradel inspired Leeds.  Add this to some astute signings made against a background of an apparent distinct lack of transfer funds available to Lord Larry and optimism is beginning to waft dangerously around Elland Road.

Which is good and should make for a nice positive atmosphere for our opener against Derby. It's the same mixture of anticipation and expectation you get on Xmas Eve or the day before your holidays.  You mysteriously wake up with a lovely pair of Rose tinted spectacles that focus only on the forthcoming banquet of joy.  So you relish the thought of opening presents and demolishing a Turkey dinner with all the trimmings whilst conveniently glossing over the fact that there is high probability that some of the presents are destined for the back of the cupboard never to see the light of day and the Turkey will be as dry as the bottom of a Budgie's cage.  It doesn't stop the excitement though and the same goes for Football fans all over the country as they prepare for a season where at this particular moment anything is possible.

So will our first game be adorned with succulent Turkey, delicious roast potatoes, exquisite Xmas pud and presents to die for?  Injuries and suspensions have taken an unreasonable toll already with Snoddy, Kissy, Somma, Mad Max and the artistic Mr Paynter all sat on the sidelines as the game kicks off on Saturday tea time.  Question is who will accompany Mr Becchio up front?  Possibly nobody and we play with 5 in midfield or will Sanchez Watt add some electricity to the Argentinian human dynamo?  There could even be a forward role for Lloyd Sam or less likely a starting place for Mike Grella.

In midfield  Howson, Kilkenny and Johnson will be vying for starting places or maybe all three will form a robust central unit to repel Robbie Savage's efforts whilst at the back Collins and Bruce could be the new pairing at the heart of the defence.  The biggest selection debate troubling Lord Larry, as he puts out a mince pie for Rudolph, will be who starts between the sticks after bring in another Kasper to replace Brighton bound Casper.  An indifferent pre season showing by Mr Schmeichel has left the door open for Shane Higgs to claim the jersey against Derby.

So another chapter in the colourful history of the mighty whites is about to begin.  Are we on a springboard back to the money grabbing league or will we find the weight of expectation and the financial muscle of a very competitive Championship too much for Lord Larry's charges?  Only time will tell.  So get out your seat belts and check them for strength, cross your fingers, dust off your lucky shirt and get ready for another high velocity rollercoaster ride.  The first car leaves at 5.15pm Saturday. Whatever you do don't be late. This could be a classic!
Can't wait!
MOT
Posted by Andrew Butterwick at 18:52

I am just glad to be in this division after all the heartache of recent years. Fingers crossed and here's hoping for a good season.

Enjoy the game, looking forward to reading your report as usual.

Can't wait for 17:15. Will be interesting to see how we line up. How will Adam Clayton fit in do you think?