Tuesday night football is fast becoming the stuff of nightmares for followers of the Mighty Whites. Barnsley, Preston and now Leicester City have all gorged themselves on an inept Leeds team.  Every single game on a Tuesday night and every single game I have driven home embarrassed after watching the opposition give Leeds a football lesson.  It all started with a spark of anticipation in the air after Saturday's win against Boro though.

As usual the Happy Chocker and the Quiet One were on board for the dash to Elland Road.  Winter was making a good fist of introducing himself for the first time this season as the cold night air nipped at any exposed extremities on the walk from the car park to our place in the Captains Lounge.  Good news greeted us with the announcement of the same team that started on Saturday.  That together with the lubrication of a pre match pint generated some rather optimistic predictions of another Leeds win before we took our seats.

Now it would be no exaggeration to say that we didn't get a kick for at least the first 10 minutes as Sven's team settled into an impressive pass and move style which saw Leeds chasing shadows.  By 15 minutes they had spurned three good chances.  If it was a boxing match  the referee could easily of stopped it to prevent irreparable damage to the home team. Sven "the Dentist" had certainly done his homework as his 5 man midfield moved like a formation dancing team about the pitch untouched by any effective Leeds tackling.  This was going to be a bad night. After half an hour Watt was sacrificed in favour of Bradders with Somma tucking into the left midfield to form a 5 man midfield.  This at least made it a bit more difficult for the rampant Foxes and I was soon rashly declaring that if we got to half time goalless I would show my bum in Woolworths.
We did somehow create a couple of half chances as Collins headed wide and just on half time Bradders hit a 25 yard shot over the bar.  Somehow Leicester managed not to score despite having most of the possession and cutting the famously fragile home defence open almost at will.  The half time whistle blew with the score still goalless.  Mmmmm it's a cold night and thankfully all the Woolworth stores closed down last year! 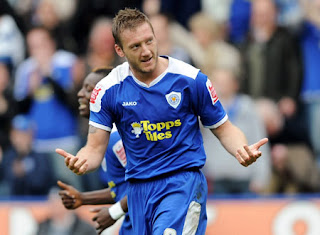 The 2nd half started in similar fashion to the first and it soon became apparent that the question was when and not if Leicester would score.  They definitely did not look like a relegation team as from 1 to 11 they all looked comfortable on the ball and were happy to pass between half a dozen pairs of feet before making a break.  It was very easy on the eye if you were a neutral and very frustrating if you were a Leeds fan as our response amounted to a couple of passes and then a hopeful punt up to Lucciano.  For all the attractive Football the goal when it came was as a result of an horrendous mistake in the box which allowed Kyle Naughton to shoot and take a wicked deflection over the stranded Brown into the Leeds net.  It was no more than they deserved.

Lord Larry responded by throwing on Kilkenny and Mad Max with 20 minutes to go.  At least Killa showed himself for the ball, something that hadn't happened until then, and Mad Max was his usual illusive self down the right flank.  Then Sven sent on Steve Howard.  The same Steve Howard who had hit the winner in the last two games between the sides.  "He's forced to score" I prophetically  observed.  Sure enough he did after a worse howler than the one that resulted in the first goal.  Naylor seemed to go to kick or head an imaginary ball as the real one sailed serenely through to King who couldn't believe his luck as he took the ball into the Leeds box before delivering a gift to Howard who coolly slotted the ball home.  2.0 and game over.

Hundreds of frustrated fans headed for the exits.  This was a worse performance than against Preston in many ways as we had never posed any threat to the Leicester goal or even looked remotely like we could create a decent chance.  Then out of nothing we scored.  Mad Max weaved his magic down the right before curling a cross in for Becchio to head in a perfect goal.  Just maybe?  Fans who were heading for the exit returned as the clock showed a tantalising 9 minutes left for Leeds to snatch an undeserved draw.  The crowd sparked into life as Leeds at last showed some urgency and gave Leicester a couple of uncomfortable moments but it was too little and too late.  Leicester survived for a stylish win.  They played as well any team I've seen this year.  If Sven can bag himself a goal scorer they could be in the promotion mix come next May.  As for Leeds where do I start. Defensively we looked vulnerable right across the back four.  Naylor was simply shocking but he wasn't alone. Howson went missing in midfield, Faye looked as if he was still injured and the two full backs were poor.  The key thing was we were beaten tacticlly though.  Their centre halves strode into midfield all night without anyone in a white shirt challenging them and in doing so set up attack after attack.  Why didn't someone on the pitch pick that up and sort it?  Answer is unfortunately there is no leader on the pitch taking responsibility in my opinion and until Larry resolves that issue we will struggle.

This was a shocking performance.  I suppose it confirms the view that we are consistently inconsistent along with numerous other teams in this league.  All in all this game put our standing in this league in perspective.  We do look very ordinary against teams that like to play with the ball on the deck and pass and move.  Lord Larry has a lot of work ahead of him if he is going to steer the mighty whites any higher than mid table this  season.  If not we will bob up and down the table like a cork floating in a choppy sea.  Not a pleasant thought.

Was actually quite impressed with our opposition, but make no mistakes we were awful for large parts of that game. Worrying stuff indeed.