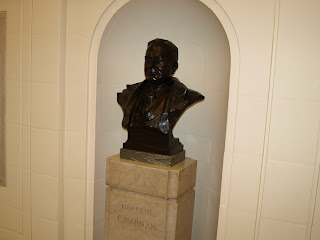 The euphoria of so nearly beating Arsene's footballing eye candy has lasted well this week.  For once there has been a modicum of respect and admiration for the mighty whites from those human beings who do not inhabit Planet Leeds.  All of a sudden across the country we are known as unlucky Leeds..........well except for parts of Huddersfield, Hull and the Salford Yank area of Essex.  And it's all down to the magic of the FA Cup.  That magic continued with the draw for the 4th round as we were pitched against the Tesco bags from Udderstoon..........assuming we overcome the Gooners in the replay.  How spooky was that though?  After all where did I "invite" myself into after the game on Saturday?  The old Highbury Stadium complex that now houses exclusive apartments but still has the original marble entrance hall complete with the famous bust of Herbert Chapman on display. Herbert Chapman managed the old Leeds City before moving onto phenomenal success with both Huddersfield and Arsenal in the 20's and 30's. Is this a sign that the ghost of Herbert Chapman is trying to right a 90 year wrong and point Leeds to success in the FA Cup that he couldn't deliver when he was alive?  Let's hope so because we will need every finger crossed............every lucky suit worn.............every lucky scarf worn if we are to send Arsene's Gooners the same way as Mr Ferguson's Salford Yanks went last year.  If we do then get ready for an extended interest in this year's oldest cup competition.  Semi-Finals maybe?

It was good to see Lord Larry picking up the manager of the month award for December and thoroughly deserved it was too.  Problem is that the dreaded Manager of the Month curse is lurking in the wings in the shape of Scunthorpe United, probably the most least fashionable club to visit the Theatre of Hope since a certain Wycombe Wanderers burst our post "we beat the scum 1.0" bubble by pinching a point in the aftermath of our Old Trafford heroics last year.  So will the curse strike? I don't think so for the simple reason we are a much better side than last year and the confidence and team spirit in the squad at the moment is rock solid.

Of course we are in the middle of the transfer window and as yet none of the rumoured "targets" (Smith/Woodgate and even Bowyer have been mentioned) have appeared at Thorp Arch.  There were scurrilous rumours that David Beckham was about to make a shock move to the Mighty Whites.  Everything appeared to be in place.  Posh Spice had approved the shopping available on a fact finding trip to Yorkshire's premier city. After a dodgy start in the White Rose centre she was well impressed with Harvey Nicholls............so Mrs Beckham had given the move her royal seal of approval.  Then the deal hit the buffers!  Capt Birdseye had found enough money to pay Goldenball's wages through a novel deal for season ticket holders where they committed to pay an extra bond of £450 each for next season in order to have priority access to Graveleys Fish and Chip shop on match day.  No Goldenballs was about to sign on the dotted line when the white bearded one put just one final condition on the table.  "Now Mr Beckham I am a generous man  and I recognise that player's families will want to come and watch their loved ones play so I will throw in one free ticket per match for your wife and I'll even find three for your kids.............on the proviso she does a turn in the Centenary Pavillion before each match"  Goldenballs got up and left immediately muttering  "I couldn't live with my conscience if I condoned such a move.............I've far too much respect for those magnificent Leeds fans"

So Scunny arrive at LS11 on Saturday seeking revenge for that Jonny Howson inspired 4.1 thrashing at Glanford Park earlier in the season.  They will be tough opposition as they always seem to punch well above their weight but I can't see anything other than a comfortable win for Super Leeds................I would just fasten your seat belts and leave your oxygen mask handy though.  Just in case!
Can't wait.
MOT
Posted by Andrew Butterwick at 22:39