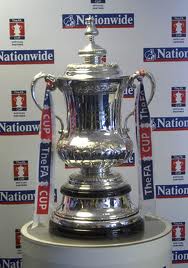 After cruising past a poor Scunny side on Saturday thoughts now turn to the rematch with Arsene's Footballing eye candy from North London at what will be a white hot Theatre of Hope. All the ingredients are once again in place for a possible cup upset. Leeds as the underdogs are in good form having lost only once in the last 15 games take on an Arsenal team who have stumbled in recent weeks, aside from thumping West Ham at the weekend, in the cauldron of a sold out Elland Road. Add to the mix Sanchez Watt who Arsenal dismissively allowed to play against them and Tom Daley's training partner, Theo Walcott, raiding the flanks through a torrent of "advice" from the home crowd.  Stir in our favourite flying Scot, Snoddy, tormenting both of the Arse's full backs and the Gooners own little Meerkat, Arshavin, trying to unlock the resolute Leeds defence line.  Allow to boil for 120 minutes and you have the perfect recipe for a nerve jangling, heart thumping FA Cup casserole that should warm the cockles of the nation on live TV...............unfortunately ITV are screening this one so if you're watching at home look out for rain on the camera obscuring your view or the odd ad break just as Sanchez's scores the winner! 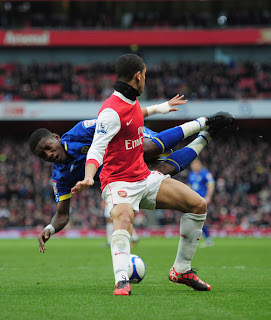 Realistically Leeds' best chance of progressing to the 4th round was probably at the Emirates.  I suspect Arsene may put a stronger team out this time after reflecting on the way Fabregas and Walcott tore into Leeds in the latter stages of the first game but on the other hand he may want to rest some of his pampered foreign legion with a difficult 2nd leg of the Carling Cup semi final looming after the Tractor boys snatched a one nil lead from the first leg. I do hope Arsenal's very own pantomime dame, Nicolas Bendtner, aka Woody, is in the starting line up as this would certainly nullify some of Arsenal's attacking thrust with his own unique style of play.