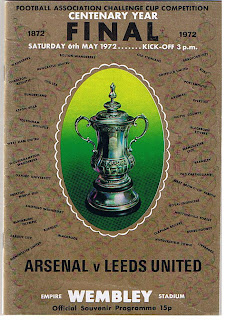 Number one........Arsenal........will play Number twenty..............Leeds United. Arsenal at home to Leeds United.  And so the majority of Leeds fans got their dream draw.  A year after humiliating the Salford Yanks in there own back yard we are back under the spotlight as we take on Arsene's footballing eye candy in front of ITV's cameras on Saturday lunch time.  It's difficult to mention the FA Cup and Arsenal and not think back to those heady days of the early 70's and the Centenary FA Cup final between the Mighty Whites and the Gooners, North v South and the two Titans of the day clashing on the hallowed turf of Wembley.  Leeds famously won that game with a goal from a certain Mr Clarke just 4 years after beating the same opponents in the League Cup Final by the same score courtesy of a Terry Cooper goal.  Those two victories remain the only two domestic cup final wins for Leeds United to this day and both by a single goal.

All fond memories and so they should be but we are now in a different century and Football has certainly changed almost beyond recognition.  On Saturday we will be watching in a state of the art stadium that has padded seats, a sophisticated artificial growing system for the turf that keeps it in pristine condition all year round and we will be kicking off at the same time Grandstand used to start.  Our game is one of 4 live games  spread across the weekend as armchair fans gorge themselves on the feast of televised Football. The one thing that remains consistent with the FA Cup though is the opportunity it gives to clubs from a lower league to hob nob with the big boys and that's exactly what we will be doing on Saturday. To quote Plymouth's new football consultant we will be "living the dream" only this time it won't be bank rolled by £100m we haven't got. 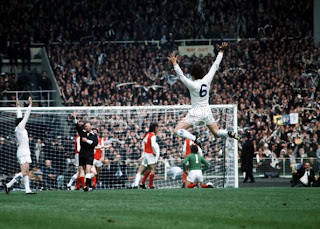 So we will travel in hope to the Emirates with expectations set realistically low, I can hear one of the urinal philosophers saying "I'll be happy as long as we don't get smashed 6.0", on the premise that we will definitely win the award for generating the best atmosphere at the Emirates this season.  Any thing else will be a bonus. Now that's the sensible and logical view but................there have been times when I have been accused of being over optimistic. If I was ever so slightly optimistic I might come to a different conclusion!