Football fans the world over are notoriously hard to please.  This point was brought home to me as I took the usual train from Selby into Leeds.  Sat in the same carriage was an Arsenal fan on his way to the Theatre of Shite for their FA Cup clash with the team that can't beat Leeds in the same competition.  My simple question enquiring how he thought his team would get on against the Salford yanks unleashed a torrent of self critical doom and gloom regarding his team, manager and system of Football they play that would make you think they were fighting a relegation battle in League 1.  This is a team that sit 2nd in the Premier League, at the time were still in the FA Cup and their last match had been against the magnificent Barcelona team in the UCL.  "It must be tough following Arsenal" I said, tongue firmly planted in my cheek.  "It is mate, it is" he genuinely replied before complementing Leeds fans and the atmosphere they created both at the Emirates and at ER in the replay.  "The atmosphere at Elland Road was the best I've ever witnessed" he said.  Well it would be if he sits in the Emirates library every 2nd week!

Leaving Mr Grumpy Gooner on his lone trip to Manchester I scuttled to Elland Road to meet up with the Happy Chocker.  Who would start today, Paynter or Becchio, Bannan or Killa.  Opinion was divided in the members bar........ that was until Paul Connolly and Lloyd Sam both plumped for Billy Paynter as first goal scorer under the spotlight of Peter Lorimer's questioning. So an unchanged team took to the pitch with Becchio and Bannan warming the bench.  Ipswich had both of BUPA's finest clients, Bullard and Dyer, starting who reputedly earn a combined sum of £125k a week. 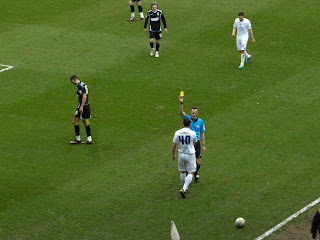 Ipswich were out of the blocks first with their first attack "prising" open the home defence with a simple ball over the top which Priskin should have at least tested Kasper.  The early warning from a team that dismantled Cardiff a week ago was ominous.  The first 30 minutes flew by despite the scrappy fare on show.  Mad Max tested the Blues goalie with a couple of shots after jinking inside his full back and "Come on Billy" nearly got on the end of a stinging low cross.  The referee, Mr Deadman,  showed that he hadn't an ounce of common sense or understanding of the game as he infuriated both sets of fans with some baffling calls.  O'Brien was booked for supposedly tripping an Ipswich forward who he was running away from and towards the ball?  We have had some "interesting" ref's this season but he's got to be the most baffling.

It was no surprise that when at least one Ipswich hand blocked a goal bound shot in the penalty area Deadman just waved play on with arms rotating like a  windmill as he ran quickly away from the incident (always a tell tale sign that the ref's just dropped a bollock).  Mad Max tried another curling shot but the half ended goalless.  Not a 45 minutes to set the pulse racing as shown by the Urinal philosophers at the Half time debate who were very quiet about the match but very animated about the lack of tickets for the Blunts game.  A combination of a miserly allocation from the South Yorks club and the farcical online application system has meant that a significant number of the regular away match attendees have ended up with no tickets. No way to treat your customers Mr Bates! 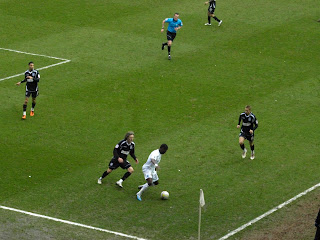 Back to the game and the 2nd half spluttered into life with Leeds firing in a procession of hopeful attempts.  Howson, Paynter and O'Brien all tried their luck but to no avail.  The scrappy nature of the game continued with Ipswich content to try and stop Leeds playing and then break quickly.  Their expensive mid field was functional rather than classy with Dyer in particular looking like a fish out of water for most of the game.  He was withdrawn on 75 minutes.  At the same time Howson made way for Bannan and Becchio replaced Billy ready for a final assault on the Ipswich goal and three precious points.  In all honesty the game then just fizzled out but for a couple of crosses that found their way into the Ipswich box and caused mild concern to the resolute Tractor boys defence.  The referees whistle brought to an end a match that will be quickly forgotten.  The score sums up the quality of the game, 0.0.

The crowd streamed away disgruntled by an opportunity wasted as most of the other promotion hopefuls had had less than successful days. At least we kept a clean sheet but it's a bit ironic that when we keep the ball out of Kasper's onion bag we fail to score.  Only time will tell as to whether these were two crucial points dropped but I felt it was a draw that had all the same feelings that a defeat brings to my Saturday night.  I suppose we can't expect to score 3 and 4 goals every game but for whatever reason we never really looked like getting a goal.  Would Becchio have done better?  Not sure he would really I've not seen the stats but there weren't many chances created today.  Let's put it down to a bad day at the office and move onto Brammall Lane next Saturday. 3 points will get us back on track.  I do hope I find a ticket? If I do.
Can't wait
MOT.

Posted by Andrew Butterwick at 23:24

It was Cardiff last week - not Swansea ;)) Cheers for the point anyway!

It was the ref Danny McDermid that sent Kandol and Beckford of that fateful day. I remember it well.

Ben,
thanks for that. I'd heard the reference to Deadman being the Gills ref on the radio?. He was still shite!
MOT

Agree with you about the poor performance of the "man in the middle" but it was a different ref that sent off Beckford and Kandol at Gillingham...Danny Mc Dermidd who has never took charge of us since