Last of the Summer signings? The transfer window starts to close.

Whisper it quietly around Craven Cottage and Upton Park but the transfer window closes at 11.00pm on 31st August and at this moment in time none of the Theatre of Hope's crown jewels have been exchanged for a wad of cash.  Some might argue that Kasper Schmeichel was a shiny gem but his reputation has been severely tarnished by a combination of excellent performances by Lonergan and the exposure of his own petulant weaknesses at the Championship big spenders, Leicester. By the end of the season Lord Larry's signing of "Lonnie Donnegan" could well be seen as one of the must astute deals of the season.

The big question is still whether Snoddy and Mad Max will be running out at Elland Road against Crystal Palace on 10th Sept.  Surprisingly rumours of interest in Snoddy have been few and far between whilst every day seems to bring news of a new suitor for our little black diamond from the Ivory Coast.  The latest club to reportedly show an interest is the French club Sochaux.........................I know..................who the frigging hell are Sochaux?  Can't see that happening but you never know.  One thing for sure the Ivorian's agent is working overtime to earn his transfer commission before the window shuts.  I fear his performance at West Ham and their subsequent dumping out of the Carling Cup by minnows Aldershot will lead to a revised offer from the Hammers over the weekend.  Hopefully Leeds are true to their word and stick to their valuation of £10m as even the Porn King owners of the Eastenders wouldn't pay that for him.  If they are daft enough to offer that sort of money we should take their centre half Tomkins in part exchange as he would definitely strengthen our back four?

The main debate on Planet Leeds since the Donny match has been all about the fast growing reputation of Ramon Nunez.  His stunning strikes against South Yorkshire's finest took his goals tally to 5 in 3 games this season and provoked an emotional cyber discussion over whether he should start against Ipswich.  On the assumption our other black diamond is still with us then I can't see Lord Larry leaving Mad Max out in favour of Nunez although he might just sacrifice Ross Mac's position alongside Keogh to start the Honduran?  Capt Birdseye has not been slow to point out to all his moronic customers the benefits of bringing free transfers in and then developing them on loan until they are ready for first team action as has happened with Ramon.  Apparently the Italian agent who dug up the Honduran diamond lives in Monaco, the same as Cuddly Ken, and he has other South American stars in the pipeline ready to bring to ER.  All sounds good news...................just a pity Capt Birdseye has to use his unique abrasive style  of communication with his customers even when he's dispensing good news.  Reminds me of Gerald Ratner. 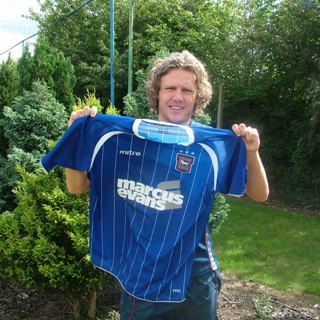 Back on the football pitch we travel to Portman Road on Saturday with the big spending tractor boys in a bit of early season trouble after losing their last 4 games and shipping an eye watering twelve goals in the last two.  They have been "strengthened" this week with the signing of the Mr injury prone money bags Bullard who then proclaimed to all the world that "Ipswich was the first club that came to mind as soon as Hull made me a free agent"....................proving once again that overpaid footballers do talk absolute bollox to justify their selfish, greedy and transparent actions.  Even with their new Ipswich fan in their ranks I'm smelling the lovely aroma of three points for the mighty whites come 5pm on Saturday tea time.  I mean if the Posh can rattle 7 goals past David Stockdale, weren't we going to sign him?, we should have a veritable goal feast with our potent attack shouldn't we?  Oh if only football was as simple as that................still after due consideration I'm going for a 3.1 win with the new Nunez song ringing round Portman Road for most of the afternoon.  Finally can anybody answer this question?  Why can't we score or even look like we can score from a corner?  According to Wikipedia the last time we netted from a corner kick was 1947! At least it feels like that.

Another massive Leeds following will invade Suffolk for this game.  Another fantastic atmosphere guaranteed.  Another great away day to look forward to.  I do love football!
Can't wait.
MOT
Posted by Andrew Butterwick at 09:02