The faithful Scirocco was brim full of optimism as it headed south with the Happy Chocker, Eddie and big Al on board.  After all last week we had seen off the Toon in impressive style and despite many reports to the contrary we still had Snoddy, Max and Jonny Howson in our midst ready for our first day clash with newly promoted Southampton.  Proper football was back and all was right with the world.

The long trek seemed to fly by helped along by listening to radio Leicester's comical commentary on the M69 derby. "He's standing with his arms on his hips" was one of the more amusing confusing combination of words the hapless commentator spouted forth whilst his summariser, Alan Young, contributed incisive reflections on the game through rose tinted spectacles................."That was not a red card............yes his studs were showing and he did lunge in but the Coventry player is making a meal of it"  He could have been Billy Davies in disguise?

With the car finally parked and pre match refreshments underway in St Mary's we considered the fast approaching game.  As expected O'Dea was the only change from the starting 11 the previous week and through that wonderful drug of pre match optimism our little band of fans agreed we would win 2.1. Optimism was contagious and soon the concourse below the away stand was rocking with vociferous Leeds fans looking forward to another season.  Then the match started! 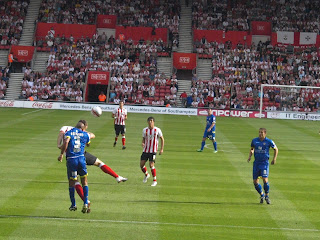 From the first minute Leeds looked off the pace.  Southampton flew out of the traps like eager new students on their first day at school.  The atmosphere in the stadium was red hot as the 3000 Leeds fans cranked the decibel levels in an attempt to fire up the men in blue but it was the Saints who were looking the more comfortable and assured as they knocked the ball about with confidence.  It was Leeds who had the first real chance though as Howson latched onto a cushioned header from Snoddy but the Saints goalie palmed the ball away.  That bright spark of hope was soon extinguished as the home side took the lead.  The Leeds midfield parted with consummate ease as Hammond ran unchallenged to the edge of the box and hit a stinging drive that Lonergan failed to stop.  The Leeds balloon of pre season optimism was losing air at a terminal rate. Midfield allowing the opposition to run straight through them and the defence not closing down quick enough. I felt a severe case of deja vu swallowing my uber-optimism.  The porous defensive failings from last season appeared to be still alive and kicking and visibly thriving at St Marys.  The first of numerous anti-Bates songs drifted up into the Hampshire air. 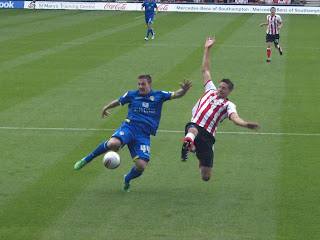 The goal took the wind out of Leeds's sails.  Snoddy looked like he'd never kicked a ball in his life before as he struggled to cope with the close marking the Saints defence afforded him.  Max looked lively when he got the ball but his end results came to nothing and the three centre midfielders failed to make any impression on the home duo. Smiles turned to frowns turned to anger amongst the Leeds following as their heroes composure, passion and game plan disintegrated before their very eyes.  When Lallana danced through the paper thin defence and curled a shot in off the post the Saints were 2.0 up and the only team on the pitch that was marching on together.  The anti-Bates fury increased behind Lonergan's goal.  Leeds got to the break with just the two goals conceded.  What was needed now was a comeback of the same magnitude we managed at Burnley last year and when Max wriggled through in the first minute of the 2nd half it looked as we might just have the guts to get back in the game.  But a failed penalty appeal was all we got.  The referee was having as poor a game as Leeds.  Then Ross Mac escaped his marker but his shot was easily saved.

Connolly soon put paid to any thoughts of a comeback with a third Saints goal after yet more indecisive and generous defending.  Game over and still over half and hour to go.  "This could get very embarrassing" I suggested to the Happy Chocker.  The rest of the half was interrupted by nightmarish flashbacks of previous feeble performances............Hereford, Histon, Sheff Utd, Barnsley, PNE, Swindon need I go on? Paynter came onto rescue the game!  Exactly. So when Clayton picked him out and he failed to convert a simple one on one even I was ready to leave early and head home.  We did finally get on the score sheet in injury time when Max converted a penalty.  There was a half hearted chant of "We're gonna win 4.3" but the final whistle drowned it out as a thoroughly disjointed and poor performance came to an end. 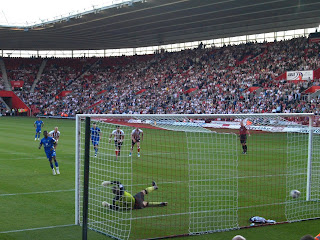 Not surprisingly the mood of the departing Leeds fans was laced with black humour.  "Norwich lost their first game for the last two years and still got promoted" "at least Max's goal lifted us off the bottom of the table" but underneath the bravado their was real concern.  Lord Larry's stated intention to improve the midfield and defence is a long way off completion at best. O'Dea's first game showed some potential but I couldn't hear anybody saying "at least we've solved the left back problem"  O'Brien struggled as he did at times last year.  Connolly looked vulnerable all afternoon whilst Snoddy was anonymous.  The only player that showed some promise was Clayton who battled well and put some neat passes together.  It is only the first game but the disappointment was huge.  Lord Larry needs to strengthen his squad clearly but he was let down by the eleven he picked for the opener.  Not enough cohesion, creativity and certainly not enough talking, tackling and marking in defence..............now where have he heard that before?  The consensus opinion was very much "same old, same old" I'm afraid.

The hotels v building a team debate rages on.  I still believe we need both and the two should not be separated.  One thing for sure is that if we don't have anything to show from the first week of the new season and there has been no significant strengthening of the squad by this time next week the pressure for change from the fans will be at bursting point.

Bradford City on Tuesday in the Carling Cup.  A potential banana skin if ever there was one.  Even without Max and Snoddy it should be no problem.  But if it is.................................the rollercoaster could be derailed before the season is fully underway.  Life is never dull following the mighty whites.  Bring on the Bantams!
Can't wait.
MOT
Posted by Andrew Butterwick at 11:15