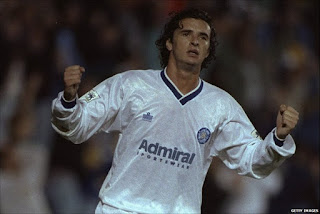 Nothing was going to stop me getting to this game. Just two short days since the tragic news of Gary Speed's untimely death Leeds were playing Forest at the City ground in what was sure to be an emotionally charged evening.  Despite finishing work early the M60, M62 and the horrendous congestion in Nottingham all conspired to stop me getting to the game on time.  Parking the car just as the game kicked off I hurried to the ground.  I was going to miss the kick off but there was no way I was going to miss the 11th minute tribute.  The clock was ticking past 7.53pm as I finally took up my position gasping for breath.  Lord Larry had plugged the paper thin mid field with Michael Brown in the centre of a five man midfield.  Becchio was the lone man up front with Pugh at full back and White on the wing. Leeds were looking for their 5th win in their last 6 trips away from the Theatre of Hope.

4,000 Leeds fans had made the trip to Nottingham intent on giving Gary Speed a fitting send off.  The atmosphere was a mixture of sadness, poignancy and celebration as the Leeds United family gathered for a Football funeral for a favourite son.  On the field Leeds started brightly against a stuttering Forest outfit.  The 4.5.1 formation helped gain an early stranglehold on the game.  As the game clock passed 11 minutes the Leeds fans sang the first extended Hymn............Oooooh Gary, Gary....Gary, Gary, Gary Gary Speed...(repeat 150 times)  Leeds seemed inspired by the tribute and pressurised a lumbering home defence.  Howson, revelling in his attacking role, broke free of the defence and struck a firm shot at Camp in the Forest goal. 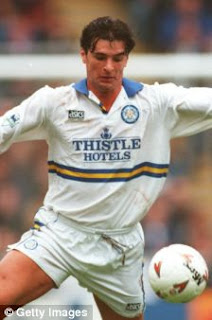 Then something amazing happened.  Just as the fantastic, emotional 11 minute tribute came to end the spirit of Gary Speed slipped into Snoddy's body......jinked passed a Forest defender and rifled an unstoppable left foot drive past the hapless Camp.  1.0 Leeds.  You couldn't have scripted it!  The fans at the funeral were now dancing with delight and disbelief.  Leeds had scored at the very second the fans tribute finished.  Unbelievable Jeff!  Leeds took inspiration from the poignant goal and started to run Forest ragged.  Becchio was like a man possessed up front and twice went near before Snoddy was presented with the ball by the unfortunate Camp 35 yards out with just Wes Morgan between him and the goal.  The rather large black leg of Mr Morgan prevented a 2nd goal for Leeds but that just delayed the inevitable as Leeds sort to bounce back from Saturday's feeble showing.  Just on half time Snoddy played a lovely ball into the path of Howson who volleyed the ball gleefully into the Forest net.  2.0 Leeds HT.  Oooooh Gary, Gary....Gary, Gary, Gary Gary Speed.

The funeral party were now in excellent spirits.  Even the sparse refreshments on sale in the ground couldn't dampen our spirits.  The place was buzzing with expectation.  Leeds had killed the game in the first half.  Could they go on and now keep a clean sheet? 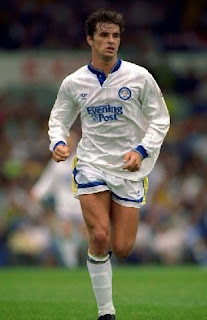 Leeds were now playing towards the vociferous funeral party and ripped into the home team from the kick off.  Oooooh Gary, Gary....Gary, Gary, Gary Gary Speed. White was causing havoc down the left wing with the solid Pugh prompting him from full back and it was this combination who set up the perfect cross for  who else but the rejuvenated Luciano to rise majestically and flick the ball into the net.  3.0 Leeds.  Get in you beauty!!!!!!!!!!!!!!!!!!!!!!!  3.0 for Gary Speed, 3.0 for Gary Speed  boomed out across the Trent as the first of the disgruntled Forest fans headed for the exit.  This was fast becoming a very special night.  The Leeds United hymn book was now given a full airing as the fans celebrated a rare thing.  A stress free game with no unexpected drama!  Leeds were now in cruise control as  a poor Forest side capitulated.  The only question was why can't we play like this at the Theatre of Hope?

On 70 minutes Clayton got the 4th after some desperate home defending had denied what seemed like 3 goal bound shots.  4.0 for Gary Speed, 4.0 for Gary Speed now boomed out across the Trent as thousands more home fans headed for the exits. Leeds closed the game out with aplomb and could have scored at least another two but for poor finishing from subs Keogh, Ross Mac and Nunez.  The rather plump Andy Reid got a 2nd yellow for a scything lunge on Aidey White and left the field to "He eats what he wants, He eats what he wants, he's Andy Reid he eats what he wants"  Not surprisingly he sprinted off the pitch and down the tunnel to the sanctuary of the dressing room.

The ref's whistle signalled an emotional end to the game as the Leeds congregation belted out 4.0 for Gary Speed, 4.0 for Gary Speed once more as the players showed their gratitude for the fantastic support.  Lord Larry thanked the fans for a special tribute to a special friend.  When Leeds United do funerals they do it in style!  This was one of those "I was there" games that will live long in the memory.  This is why I and thousands of other people follow the mighty whites.  On a night like this, to paraphrase Nottingham's favourite son Mr Clough, "you can take all your Salford Yanks, your Liverpool's and your Chelsea's and throw them in the bin because they mean nothing........not in comparison to being part of the passionate Leeds United family"

Can we carry on where we left off against South Bermondsey's finest on Saturday?  There's only one response to that!
Can't wait!
MOT
God Bless Gary Speed.


Posted by Andrew Butterwick at 23:44