For the 2nd time in a week we were heading south to London to watch the mighty whites. A cloudless sky, bright sunshine and a very keen frost provided a wintry backdrop for our journey as the Happy Chocker, Quiet One and Justin discussed the prospects for the day as the faithful Scirocco ate up the miles on the surprisingly quiet A1.  Would Snoddy make the starting line up? Will either Palace or Leeds suffer from a Cup hangover? Just how many pints had Justin actually drunk on our previous epic journey South?  All questions that were eagerly attacked as we anticipated a possible Leeds victory at the home of the Eagles of South London. 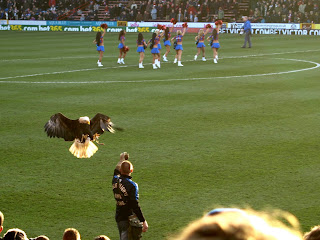 Parking at Crystal Palace is never the easiest but bizarrely we found exactly the same spot as last year empty in the maze of congested side streets that adorn the surrounds of Selhurst Park and gratefully deposited the car after the 4 hour journey.  Refreshments were taken at The Prince of Wales pub in Thornton Heath as team news started to filter through.  Becchio and Ross Mac to start up front with Brown and Clayton in midfield.  Snoddy on the bench.  Rumours of a Somma return when he was spotted getting off the team coach were proved to be unfounded.  After persuading the over officious steward at the turnstile that my camera was neither an offensive weapon nor was going to be used to syndicate professional photographs of the game worldwide I took my seat along with the rest of the 4,000 strong travelling Leeds fans in the decrepit away stand.  The Leeds team warmed up for the game dodging the fabulous flying Eagle and the gorgeous dancing Crystals.  The game kicked off.

Last year Leeds were hit with an early goal that eventually won the game and the same so nearly happened again as the Leeds captain Lonergan just got his fingertips to the ball as Chris Martin turned a teasing cross goalwards.  Not the sort of start to calm the nerves. Minutes later Martin profited from a mix up between Pugh and Clayton and ran away to slot the ball past the despairing Lonergan. 1.0 Palace with only 6 minutes on the clock.  Here we go again!

Leeds tried to get back in the game by keeping the ball on the floor and attacking Palace.  A Ross Mac free kick from the edge of the box was drilled frustratingly over the top of the bar whilst a heated debate raged amongst fans around me over people standing on seats to see the game at the expense of the views of the smaller fans behind them.  Back on the pitch the dangerous Ambrose fired a vicious shot inches over the bar as if to confirm that Palace were still bright eyed and bushy tailed after their midweek Carling Cup antics.  The game was scrappy though with passes going astray on both sides although chances at both ends kept both sets of supporters on the edge of their proverbial seats. Ross Mac played a delightful one two with Becchio and saw his sweetly hit volley deflect away for a corner whilst Scannell twisted, turned and screwed a shot goalwards only to see Tom Lees leg block his dangerous shot.  Leeds were definitely having the better chances though and but for another superb goalkeeping display by Mr Speroni in the Palace goal and some less than sharp finishing by Leeds we would have been in front.  Speroni's saves from first Clayton and then Lees were absolute top draw.

As the game scrappily headed for half time Leeds were suddenly playing against 10 men as Scannell rashly brought down Pugh who was steaming towards the edge of the box.  The inevitable yellow was the Palace man's 2nd of the game which converted into a nice shiny red colour and he was off down the tunnel early.  The home fans appeared to be outraged but why?  It was a clear professional foul as he clipped Pugh from behind a light year after he could have reasonably got the ball!  Leeds made nothing of the free kick and the teams trotted off for their half time cup of tea.  Certainly not the most entertaining half in the history of Leeds United but against ten men in the 2nd half we should be able to at least get a point shouldn't we? 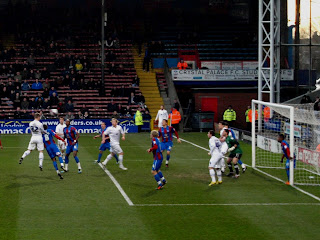 Thankfully the low winter sun had drifted below the stand as the 2nd half got underway so my view of the game improved immensely.  Now the classic way of playing a team with ten men is to stretch them from one side of the pitch to the other by letting the ball do the work and that is exactly what Leeds did.  Palace dug their trenches ready for the onslaught and Messr's Brown and Clayton pulled Leeds' strings from midfield.  Surely it was only a matter of time before we got a goal?  Leeds pressurised the home goal with Speroni even more determined to keep a clean sheet.  The imperious Lees rose majestically and thundered a corner goalwards..................Get in!!!!!!!!!!!!! I screamed but once again Speroni saved the day for the Eagles.  This was now getting frustrating. "Snoddy get warmed up" I instinctively shouted.

With 35 minutes remaining he did just that and came on to replace White with Pugh dropping to full back and Snoddy taking up his place on the right wing with Townsend on the other flank.  This should be fun! Leeds continued to squeeze Palace like a Boa constrictor slowly extracting the last breath out of it's prey but credit to the home team they did still look to hit Leeds on the break. "Wonder if Snoddy can do a Thierry Henry" I mused to HC? 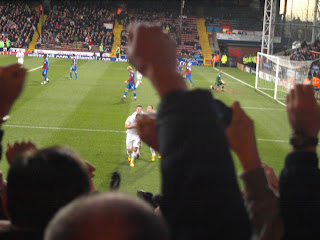 Palace's defence began to creak as Leeds breached their flanks and but for a variety of quality of final balls we would surely have sealed the game.  Then just when the doubts were starting to race round my mind we were level.  Yet another attack saw the ball come to the edge of the box Clayton's pass was blocked but the ball ran to Ross Mac who was clear on goal...........he pulled the ball back to the fabulous Snoddy, who's stretch for the ball must of tested the strength of his stitches from his recent operation, but even Speroni couldn't stop this one. 1.1 and Snoddy celebrated as if he'd just won the Cup.  I do like a bit of passion in a footballer.  He kissed the badge in front of the Leeds fans to show how much that goal meant.  Mmmm seem to remember somebody else doing that?

Leeds now went for the kill. Forssell replaced the disappointing Becchio.  His form seems to have completely disappeared? Snoddy rifled two shots that fizzed just over the bar.  A Ross Mac header looped over the bar and Clayton and Brown both tried their luck from outside the box all to no avail.  The last ten minutes were frantic as ten men Palace clung on to their precious point. 3 points were there for the taking but in the end Leeds didn't quite have the cutting edge needed to spring the Eagles defence again and the game ended even.

Leeds' 2nd half performance was encouraging even against ten men.  The ball was played on the floor for the majority of the game and the sight of Townsend and Snoddy on both flanks was mouth watering although why did Snoddy seem to want play at Inside Right and not on the wing?  Speroni was man of the match with Clayton & Lees shining for Leeds.  Tom Lees improves with each match whilst Becchio does the opposite.  He was once again ineffective looking pedestrian when he got near the ball and toothless when the ball was in the box.  What's happened? Thanks to my unreliable Sat Nav it took two hours to get out of London which gave plenty of time to reflect on the game.  We'd have settled for a point before the game so 1.1 wasn't a disaster but against ten men we should have won it.  The long journey up the M1 was helped by listening, or should I say shouting at the 606 phone in.  Mr Savage was on his usual form trying to wind up any caller so I tried my luck by ringing in.  My points must have been too good for the gypsy haired one as he chose to ignore my call.  Finally home after a 14 hour, 445 mile round trip. "Was it worth it" Mrs MOT dryly asked? "It's always worth it my dear" I responded.  Ipswich up next at the Theatre of Hope.  Will we be able to get the ball past Alex McCarthey?  I do hope so!
Can't wait.
MOT

Posted by Andrew Butterwick at 10:08

superb blogging as usual, as a keen birder that eagle looked impressive! MOT