The blustery, bitter wind matched the mood of the hardy Leeds fans gathering at Selby station.  Revolt was in the air.  The only topic of conversation was the outrageous decision to sell our club captain, Jonny Howson, and nobody was in a forgiving mood.  Capt Birdseye's ears must have been burnt to a cinder even before the train arrived and if you listened ever so carefully even the famous sign on platform 2 was squeaking in tune to "You Chelsea bastard get out of our club"  Yes revolt was in the air amongst Leeds fans as everyone seemed to be thinking the same............We've just had enough of the continuous sales of decent players and replacing them with rubbish!

As we got to Elland Road we had a decision to make.  Billy's Statue for the protest or the members bar to hear Lorimer try and justify the actions of his chairman and the board he serves on.  I'm glad we went in the members bar, not just because it was warmer there, but we were about to get an insight into what really happened with the Howson transfer.  Ben Parker was on stage with Lorimer revealing that Jonny didn't want to go to the carrot crunchers and the "club would rather have the money than the player"  Cue uproar as a flustered Lorimer tried to spin the party line but Ben was having none of it.  Now call me cynical but what's the betting that Mr Parker will now be on his way out of the club before the week's out?  Lorimer finished with an attempted rallying cry for the supporters to "put this week behind them and get behind the lads"  What the fuck does he think we do every week?  Once again the whiff of revolt was in the air. 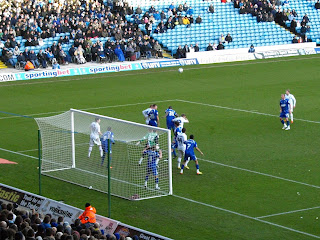 Inside the ground the news that Forssell was starting up front replacing Becchio was not met with universal joy. Becchio has been playing badly but when you see the quality of his replacement you realise what a dire state we are in.  "If we lose this game there will be real trouble" I forecast to the Happy Chocker.  The game kicked off with inevitable chants of "Bates out" as the players tried to come to terms with the awful conditions of a swirling wind and rain showers.  Not a day for pretty football.  Fabian Delph was making his 2nd debut for the club in the centre of midfield.  Alex McCarthy got a good reception as he took his place in the Ipswich goal.

McCarthy had to be on his toes early on as his erstwhile colleague, Lees, found space and headed goalwards.  Soon after a quick break by Leeds saw Ross Mac's shot canon off an Ipswich defender to Townsend but his attempted shot on goal screwed wide.  Not a bad start by Leeds but the atmosphere was as flat as a pancake.  The game was scrappy as both teams struggled in the windy conditions but it was Ipswich who began to take control of the game.  Captain Lonergan bravely stopped a one on one with Martin when a goal looked nailed on.  The off the field distractions seemed to have impacted the players.  Delph was easing his way back into the team and made a couple of robust tackles but in general Leeds looked and played with as much apathy as the crowd.  This was embarrassing.  Then Ipswich scored.  They took a short corner as the Leeds defenders fell asleep and this allowed Drury to cut inside and hit a weak shot that Lonners somehow allowed to slip through his fingers into the net.  Bollox!  "Grayson will be sacked if we don't win" a frustrated fan suggested. 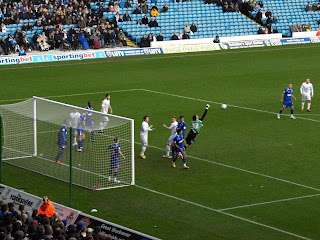 It was clear why Ipswich are flirting with relegation because they just didn't look capable of playing any kind of decent football..............but they were still having the lion's share of the possession.  Disgruntled fans disappeared for their half time refreshments with over five minutes to go.  The game meandered to half time with Leeds incapable to get any grip on the game.  Emmanuel Thomas nearly killed the game with a second goal as he hit a screamer from 25 yards that had Lonners beaten but it just shaved the right side of the post.  Leeds trudged off to loud boo's.  I bet Delph wondered what he'd let himself in for!

The Gents debate with the urinal philosophers was bleak and to the point.  The words rubbish, pathetic and clueless were well used as was equal vitriol for Mr Bates and Mr Grayson.  "If he thinks I'm renewing my season ticket to watch this shite he's got another think coming" one irate moron commented.  Mmmm I know exactly what he meant.

The 2nd half was as turgid as the first as Leeds stuttered and mis-fired with alarming regularity.  Jason Scotland broke free and so nearly scored his obligatory goal against Leeds but for the intervention of Capt Butterfingers.  More anti-Bates songs drifted skywards to accompany the banners proclaiming that our chairman has told lies for seven years............surely not?  On the hour the beleaguered Grayson turned to the two men he had dropped to the bench, White and Becchio, to try and rescue a point for the once mighty whites.  Quite frankly that looked about as likely as the Italian Cruise ship captain sailing the Queen's barge up the Thames on Jubilee day.

The change did spark some life into Leeds though as all of a sudden they realised they needed to play the ball in the Ipswich half and put the Tractor boys under pressure if they were going to get anything out of the game.  White released Pugh who's cross nearly found Snoddy at the back post.  Then McCarthy dropped a swirling cross and White just failed to steer the ball goalwards.  This was better but then again it couldn't get any worse. 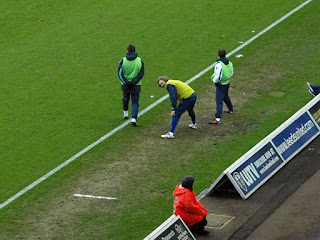 Then Leeds got a stroke of luck.  A hopeful through ball was chased down by Ross Mac and the Blues centre half panicked and headed the ball firmly back to McCarthy who was already hurtling out of his box to clear the ball.............McCarthy instinctively grabbed the goalbound ball 2 yards outside his box.  Red card and a life line for Leeds.  McCarthy walked off to the words "He's Leeds and he knows he is" ringing in his ears.  Snoddy hit a disappointing free kick but Leeds now had their tails up.

It wasn't long before he made up for the missed free kick though as he found himself unmarked 8 yards out  with an Ipswich man on the six yard box?  The ball was slipped through to Snoddy who tapped the ball home.  A bizarre goal.  1.1 and both goals had an element of comedy about them.  The Leeds crowd awoke from their slumbers and smelt blood.  Ipswich's substitute goalie was nervously trying to cope with being thrust into the limelight like a wounded Gazelle being tracked by hungry Lions as Leeds turned the screw.  On 80 minutes Clayton chipped a ball beyond the Ipswich defence inviting Ross Mac to run on to it......the sub goalie hesitated just long enough to allow the Leeds man to round him with ease and smash the ball into the net.  The Lions wouldn't go hungry tonight!

Relief swept round Elland Road.  3 points now looked certain in a match we were a poor second best for long periods.  Becchio rubbed salt into the Ipswich wounds as he bustled a defender off the ball and slotted the third home just on 90 minutes to give Leeds an unrealistic 3.1 winning margin.

The victory was welcome but nobody was fooled by the score.  This is a Leeds team and club in trouble.  Delph should help steady the ship but Simon Grayson has got a lot of work to do if he's going to keep the team in mid table never mind flirt with the play offs.  Townsend was disappointing today whilst Forssell showed just why he couldn't find a club last summer.  We might have won but these are definitely dark days at the Theatre of no ambition.  The sooner the Chairman and the board are changed the better.  We've got a week off next week before taking on Brum on the Tuesday.  It's anybodies guess who will be the team for that one.  Batten down the hatches, fasten your seat belts we are in for a rough ride.
Can't wait
MOT

Posted by Andrew Butterwick at 19:57