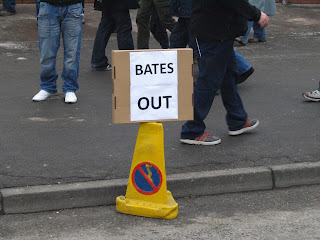 West Yorkshire was in the grip of an icy Arctic blast as the Happy Chocker, Quiet One and yours truly made the familiar journey to LS11 for our clash with Gus Poyet's Brighton.  The weather perfectly matched the ever increasingly fraught relations between the fans and the management of this once great club.  The protest march from City Square to the ground was well attended and gave another opportunity for fans to show their current disillusionment, frustration and sheer contempt for the people charged with leading the rudderless HMS Leeds Utd as it floats aimlessly in the Bermuda triangle of Championship mid table obscurity. 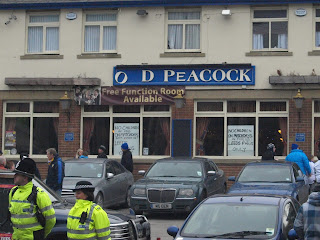 This year the traditional Valentine's Fair siting on the Elland Road car parks caused less of a problem due to the  ever dwindling crowds at the Theatre of no ambition as just 23,000 fans bothered to turn up in the forlorn hope of seeing Leeds give some spark of inspiration that would re-ignite their distant play off aspirations. The walk along Elland Road seemed to lack the usual buzz of match day.  Was it the cold? Was it pre match nerves? Or was it just another dose of fearing the worst on the pitch.  Memories of Mr Zigic's 4 goal demolition were still clearly raw. The dilapidated sign on the famous Old Peacock pub reminded me of the variations of the Fawlty Towers sign in the classic comedy series.  Somehow the comparison between John Cleese's comic creation and Leeds United is far too near reality for my liking! For those of you who haven't seen the programme the star of the series, Basil Fawlty, is a crazed, deluded leader who bullies his incompetent staff as they lurch from one disaster to another whilst refusing to listen to any criticism or advice from his customers.  Sound familiar?

Back in the members bar Peter Lorimer was grilling, sorry interviewing, the Turner twins on stage with some very leading questions.  "So have you seen a different atmosphere and buzz around Thorp Arch over the last two weeks"? Lorimer gushingly asked.................."Erm not really just like it always is" was the reply.  Not to be put off his task of showing that the sacking of Lord Larry had cured all the ills of the club Lorimer persisted. "But when a new man comes in he's got different ideas and the players respond to this" the ex-legend continued.  I didn't hear the reply I was being sick into my pint.  Such a sad sight watching an ex player once held in such high regard using the youth of the club for clear propaganda purposes at a time of fans unrest.  He should be ashamed of himself. 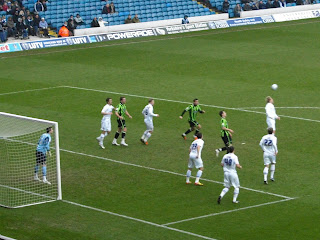 We took our seats as Gus Poyet returned to the Elland Road dugout to a very warm reception.  Neil Redfearn had kept the same side that beat 9 man Bristol.  Despite all the off the field problems I still believed/hoped we could sneak a 2.0 win out of this one.  Leeds dominated the first 20 minutes playing a neat if somewhat low tempo passing game.  Snoddy waltzed past his defender in the box and popped up a cross for Becchio who's header went the wrong side of the post.  Next Ross Mac was felled in the box for what looked like a clear penalty but the referee, Mr Salisbury, steadfastly refused to blow his whistle, something he seemed to want to do at least every 90 seconds for the rest of the match.  Adam Clayton was lucky to only get a yellow for a dubious challenge on Ashley Branes but Brighton were also not backward in coming forward in the niggly tackle competition.

Brighton soaked up the early Leeds pressure and looked threatening as the half drew to a close forcing Lonergan to make two good saves as the half ended goalless.  Mmmm the half time urinal debate was not impressed. "Same old, Same old............we haven't had a shot on goal" one disgruntled fan commented.  "lots of possession but we've done fuck all with it" was another succinct summary.  "the ref's an absolute joke.....never had the whistle out of his mouth" as the moans went on.  In summary not many happy bunnies amongst the Leeds faithful.  Leeds had the lion's share of possession and they were trying to keep the ball on the deck but it all looked a bit too pedestrian.  Becchio was once again struggling giving the impression of a new born foal trying to stand up each time the ball came to him with his back to goal.

The 2nd half got under way with Leeds playing towards the kop and so nearly took the lead with their first attack. White did well down the left flank before releasing Snoddy who put a low ball into the 6 yard box which was agonisingly close to Becchio's foot with the open goal gaping wide in front of him.  Brighton were testing Lonergan at the other end as both Mattock and Vokes brought the best out of the Leeds keeper.  The game was reflecting the tightness of the league table as both teams on the same number of points strained to get the all important first goal.  Ross Mac was the next to nearly break the deadlock as Clayton released him with an exquisite ball over the top but the Scotsman blazed the chance over the top.  The game was tense but a goal looked increasingly likely.  But at which end? 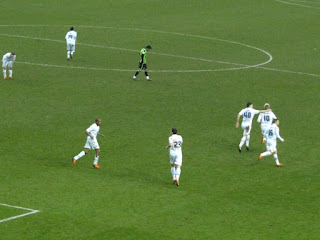 With 15 minutes left Poyet made a pro active substitution to try and win the game as Mackail-Smith replaced Vokes. Within 3 minutes he had scored.  A corner floated into the Leeds 6 yard box where the Brighton sub simply turned the ball into the open goal.  Generous defending at it's best from Leeds.  1.0 Seagulls and the all too familiar feeling of disappointment at Elland Road resurfaced.  But not for long as Becchio made up for what was a truly awful performance by snatching an equaliser with a lovely header from a Snoddy corner.  Poyet won't have been happy with their marking but Leeds were level and looking forward to at least a point........weren't they?

Townsend replaced White with ten minutes to go as Redders looked for a 2nd successive win.  Leeds pushed forward buoyed by the equaliser......................but this left gaps at the back which Navarro cruelly exposed by finding acres of space on 90 minutes and running unchallenged before shooting past Lonergan to win the game. Double Bollox!  For all the pent up frustration that goal released it did emphasise what we have really known all season..............we are just not good enough with the present crop of players/manager to mount a sustained challenge for the promotion places.

Apathy, anger and yet more frustration were the order of the day as fans streamed away from LS11.  Seems to be par for the course these days.  Where do we go from here? Your guess is as good as mine.  For a starter it will be Coventry on Tuesday followed by Doncaster on Saturday..........the bottom two teams in the division.  I fear the worst..................Manuel, Manuel find me a manager.......Que?
Can't wait.
MOT


Posted by Andrew Butterwick at 10:46