The blackbirds were leading the dawn chorus as I fired up the faithful Scirocco for the final away trip of the season to the Welsh capital to play our Lamb loving friends from South Wales.  The lunch time kick off meant a ridiculously early start and gave plenty of time to question my sanity in following the religion that is Leeds United.  On a day like today it truly is an addiction with no rehab. 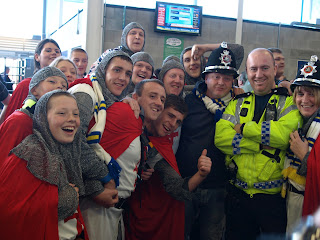 After picking up Eddie and Al we headed south without the Happy Chocker who was working down the big black hole at Kellingley.  With the season effectively already over for the mighty whites all we could hope for from today’s clash was to partially halt Cardiff’s play off aspirations and restore some pride after a disastrous late season run of mediocrity.  Collecting the match tickets from the pre arranged rendezvous at Cardiff West services might have worked better if we hadn’t had to queue in the middle of the car park in the pouring rain but undaunted we got our soggy tickets and headed for the stadium.  Traditionally the last away game attracts fans adorned in a variety of fancy dress and this year didn’t disappoint.  Apart from an entire bus load of Crusaders dressed as St George there were also Pirates, Nuns, Super heroes and the inevitable drag outfits adding a bit of extra colour to this particular away day.

With suspensions and injuries reducing Mr Warnock’s options there were no great surprises in the team selection.  Becchio returned for the injured Paynter, Bruce replaced O’Dea and Thompson replaced Webber from the starting line up at Blackpool.

The sky’s opened as the game kicked off.  The multiple versions of St George in the away end stoked up the atmosphere with lusty renditions of Engerland and God Save the Queen which got very little response for the majority of the Welsh crowd.  I think they have taken their lead from the Arsenal fans at the Emirates in attempting to be the quietest crowd in the league?  What the home crowd lacked the Leeds fanatics more than made up for as the MOT anthem belted out from the 3,000 travelling fans.

Cardiff were seeking a win to confirm a place in the Play Off lottery but it was Leeds who started the brighter.  Led by an industrious Snodgrass Leeds probed and prodded the well drilled home defence without carving out any real gilt edged chances whilst at the back Bromby and Bruce beavered away to keep the dangerous Miller and Whittingham quiet. The clock ticked past 20 minutes and I was getting a nice warm feeling about the game given that my starting expectations were lower than the world and Olympic record holder for Limbo dancing’s lowest dance!  Cardiff seemed content to sit back and hit Leeds on the break. 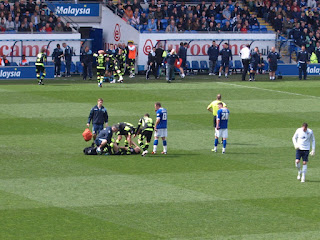 The rhythmic chant of “we all love Leeds” followed by WACCOE spurred an eager Leeds team on as the rain poured from an unrelenting grey sky.  Snoddy was at his sublime dribbling best as he taunted the home defence with his wizardry.  I do hope he hangs about for next season but with his talent and ambition he will be scrutinising the summer recruitment with a critical eye.  Then just when things seemed to be going well for Leeds tragedy struck.  Bromby passed the ball innocuously to Lees and then collapsed in a heap.  Players immediately rushed to his aid in what was clearly a serious injury. A lengthy stoppage followed while the medics dealt with him and stretchered him off.  Connolly replaced him with Lees moving to centre half. “By my reckoning we haven’t any centre halves left have we?” Al enquired.  Mmmm....... Monty Gimple and Ethel could be on the bench for the Leicester game.

The game headed for half time with Leeds enjoying a good deal of possession and even stringing more than 8 continuous passes together on the floor.  The Leeds fans couldn’t believe what they were seeing! Problem was that when Cardiff had the ball they looked more incisive and helped by Leeds’ tendency to shy away from tight marking in the last third of the field the away team started to look vulnerable.   That vulnerability was exploited on 40 minutes as the impressive Joe Mason put the Bluebirds in front with a clinical finish after both Bruce & Lonergan hesitated to deal with a simple ball over the top of the defence allowing Mason to lob the ball into the empty net from a tight angle.  The Cardiff fans exploded into life and soon “Men of Harlech” was competing with MOT in a cauldron of sound at The Cardiff City Stadium.  Kenny Miller should have made it two on half time but was denied by a superb Lonergan save. 1.0 Cardiff at Half time.

Cardiff were now 45 minutes away from confirming a play off spot and played conservatively so as to deny Leeds a chance of spoiling their party.  Whilst Leeds laboured tirelessly  to get back into the game all the key reasons we are not in the play off positions came to the fore, disjointed flow of passing, a lack of creativity, aimless long balls and a certain amount of “headless chicken” defending.  The disappointing thing is that Cardiff aren’t that much better and yet they will be competing for the chance to play in the Money Grabbing league.
On the hour Warnock made a double change as Clayton and Ross Mac were replaced by Nunez and Webber.  It was the 2nd game running Clayton was subbed immediately after getting booked.  Webber’s input confirmed what a lot of Leeds fans have suspected since he arrived that he doesn’t like to tackle or for that matter track back and his shooting is wayward.  Not a good combination for a professional footballer. 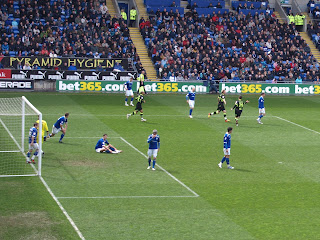 The game came to life with just over 20 minutes to go.  First Lonergan pulled off a stunning save to deny Taylor.  Leeds immediately went up field and threatened the home goal. Thompson hit a neat ball beyond the home defence for Snoddy who stood up his full back before laying up for Connolly, who for once hit a perfect cross. Out of the crowded 6 yard box rose Mr Becchio to flick a perfect header into the corner of the net.  Delicious!  Suddenly the Leeds fans that had dragged themselves out of bed at the crack of dawn and were already hoarse had something to sing about.  If the Cardiff fans didn’t already know they soon were made aware that Becchio cost less than Berbatov and scores more goals.  The game did need a goal and it had the desired effect as both teams now pushed on for a winner.  Lonergan was the busier of the two goalies as the game finished 1.1.  Leeds were the happier of the two teams at the final whistle as the players stripped off and threw their shirts to the travelling army.  “There’s only one Neil Warnock” thundered into the South Wales sky.  A big thumbs up from the man once known as Colin.  He carries a lot of expectation into the summer.

Lonergan was probably MOM for the 2nd game running.  Snoddy looked good and there was plenty of effort from the rest with the exception of Webber who looked as if he didn’t want to be on the pitch a fact not lost on the critical away support.  The long journey home flew by.  Boro’s come back against Saints played out on Radio Five live as Reading deservedly clinched the title.

i like this site, ,it's really giving news and information. .