Battling Leeds take a point from the Reebok.

Bolton away on a Tuesday night is one of the easier trips on Leeds' schedule for this season but the slate grey skies and horrendous rain made for a difficult journey. The sky was so dark and the cloud so low I couldn't even see the stadium as I left the water bound M61 on the final stretch to the Reebok. After drying out on the outside and wetting the inside at Frankie & Bennies I dodged the rain for the short walk to the Reebok.  Bolton Wanderers are a contradiction of a club.  Very high on tradition and quite rightly treasure their history but play in one of the best and most futuristic stadiums in the country.  Once inside the impressive arena you are regaled by a stadium announcer who sounds like a cross between Peter Kay and Fred Dibnah but plays heavy rock music! Must be all those Trotters they like to eat?

On the pitch Warnock had brought back Drury at left back in place of Aidey White.  The 4,000 travelling army tested the acoustics of the stadium as Leeds prepared to do battle with an Owen Coyle side that were finding the transition to the Championship a difficult one. Despite the torrential rain the pitch was in remarkably pristine condition.  Diouf was made Captain on his return to his old Bolton stamping ground and received a warm reception from all sides of the ground.  Leeds were looking for a 4th win on the bounce but in truth started poorly as Bolton slipped into a neat passing game that unsettled Warnock's warriors. 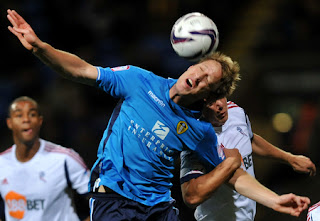 The referee, Phil Dowd, is not my favourite ref.  He always wants to be centre of attention and within the first ten minutes he had lectured both managers, blown for 675 free kicks and gone through his full range of dramatic gestures when making his over officious decisions. What a knobhead! Leeds were struggling to cope with the physically big Bolton side and Kevin Davies in particular and it was no real surprise when the Trotters took the lead on 15 minutes when slack marking by Austin in the Leeds box allowed Davies to head home from a corner. 1.0 Bolton.  Leeds were now in danger of being swamped as the Bolton midfield took control releasing Eagles time and again to terrorise the Leeds defence.  Kenny prevented a second goal with a good save from one time Leeds target Andrews before Eagles hit the post with a super shot and then Afobe lifted the ball over the advancing Kenny but inches wide of the post Leeds were hanging on by a thread.........but we're hanging on.

At the other end Becchio latched onto a delicate through ball and so nearly beat the advancing goalie. Byram was shining in a lack lustre Leeds team and gave the home side notice of his intentions when he wrapped a curling shot past the Trotters goalie but just the wrong side of the post. Then Leeds were level somewhat against the run of play.  Diouf fired a sweet ball into the box from a free kick and young Byram ran across his defender and glanced the ball into the net. 1.1.  Top man, top goal. 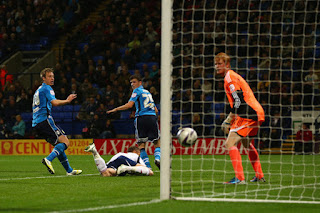 Leeds were now back in a game they had been in danger of losing before half time. The half time whistle went and the Leeds players trooped off for what would probably be a few sharp words from Mr Warnock.

The second half couldn't have started any better. After just 1 minute Leeds were in front.  The stylish Diouf rolled an inviting ball into the box where young Byram pounced just before a Bolton boot sent him tumbling to the ground. Penalty!  Up steps Mr Becchio. 4,000 fans held their breath as Becchio slotted the ball home and then exploded in a cacophony of delight and celebration. 2.1 Leeds and "Marching on Together" was ringing around the stadium. Sweet.

Leeds were playing with more confidence and were also pressing a lot more than in the first half. Phil Dowd was still giving some bizarre decisions for both sides. Bolton tested Kenny again with a stinging drive but Leeds soon responded with a Diouf inspired attack as he set up Drury with stunning pass beyond the full back which allowed the left back to skim a ball into the 6 yard box.  A speedier centre forward than Becchio would have scored from that.  Bolton seemed to lose their way as battling Leeds fought tooth and nail to preserve their precious one goal lead.  With 15 minutes left I glanced at the stadium clock and tried the old trick of willing the minute hand round towards 90 minutes but to no avail.  Bolton were still looking dangerous if not a tad disheartened as they got more and more desperate.

Nearly 80 minutes gone now.  We couldn't hold out could we?  Well as it happens no.  Peltier conceded an unnecessary corner.  Nerves jangled in the Leeds defence and the away hordes.  Austin had struggled to keep tabs on Davies all night at set pieces and was unable to prevent the wily old centre forward burying a header in the Leeds net.  2.2. Bollox!  Bolton were now in the ascendency as they poured forward looking for a winner.  For Leeds it was all hands to the pumps as they hung on.  As the game crept into added time it was Leeds who were a whisker away from securing their third away win of the season when Diouf curled a shot beyond the Bolton keeper and rattled the bar.  The game ended at 2.2 and probably a fair reflection of the night's action.

Sam Byram was my man of the match with another sparkling display of pace, skill and maturity.  Diouf showed plenty of touches of class whilst Pelts looked uncomfortable all night aginst the pace and guile of the Bolton attack.  A point at Bolton is never a bad result but after sneaking in front there was an air of disappointment at letting the Trotters back into the game from the fans as they left the soggy stadium.  Phil Dowd did his best to spoil the game for everybody but that's what he excels at.  Leeds should approach the game with Barnsley in good heart though as their mini unbeaten run continues.  Time to lay the Barnsley hoodoo?  I do hope so.