Elland Road was bright but decidedly chilly as we marched towards the Theatre of Hope for the clash with Lee Clark's mis-firing Birmingham side.  The Happy Chocker, Quiet One and brother Chris were alongside as we hurried into the members bar for the obligatory pre match drinks.  Not for the first time under Mr Warnock the team sheet raised a few eyebrows.  Pugh at Left back, Peltier at centre half and Tom Lees at right back.  Austin was back in his central midfield role with Norris alongside him and Byram and Tonge out wide.  Becchio and Diouf were up top.  Strangely White and Drury were on the bench and Reg Varney was nowhere to be seen?  Rumours that Varney was ill explained his absence but not why Pugh was preferred to both White and Drury at left back.  Still I had a modicum of confidence that Warnock's warriors would see off the Brummie blues.  Mmmm how wrong I was. 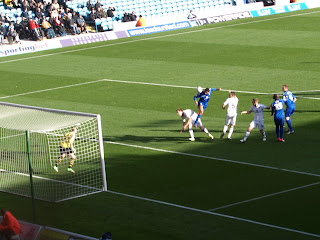 On paper Birmingham have a decent side that their current league position belies with King and Lita leading the line looking sharp and pacey as the away side had the better of the opening exchanges.  Leeds fans were looking for a significant improvement on Tuesday's woeful form but there weren't many signs of encouragement as once again the home side struggled to keep possession favouring the high hopeful balls up in the general direction of Becchio.  When Kenny tried to throw the ball wide to initiate attacking moves more often than not we lost the ball and put ourselves under pressure. A sense of deja vu started to engulf me as I witnessed a Leeds team struggling to get any sort of grip on a game against an out of form visiting side.  This was not good but just as I began to despair there were two flickers of hope.  First young Byram linked intelligently with Diouf and Tonge to bypass the Brum defence only to be denied by Butland in the away goal closely followed by Austin motoring in from the centre of midfield and unleashing a fierce shot that Butland saved with his knee.  But Leeds failed to capitalise on the spurt of pressure as too many set piece balls and crosses into the blues box were easily dealt with by an increasingly confident Birmingham defence.

Half time came with the score at 0.0.  Leeds had performed slightly better than Tuesday but then again they couldn't play any worse.  Diouf and Byram showed some promise but other than that it was a familiar tale of averageness.  The gallows humour amongst the urinal philosophers was as rich as ever.  "Let's face it we're shit and we better get used to it" was one punters view.  "It can't be worse than Tuesday but they are trying hard to match it" was another view.  I just had that all too familiar sense of foreboding.  I couldn't see anyone on the pitch who could change the game for Leeds, not even Diouf in his splendid isolation.

The 2nd half followed the pattern of the first.  Lot's of huff and puff and then a mis placed pass or a ball launched into orbit whilst Birmingham seemed to grow in confidence sensing they could extend their good recent record against Leeds.  Frustration was in abundant supply amongst the disappointed Leeds fans.  The midfield allowed Birmingham acres of space which they gladly accepted and started to dominate proceedings with both King and Lita giving Peltier and Pearce problems at the back.  All the more galling knowing that Lita was one of Warnock's targets in the summer that didn't materialise as the takeover stalled. 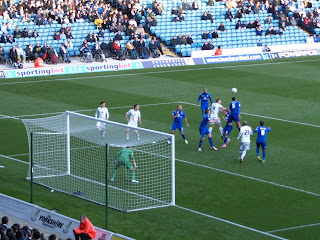 As the game surged towards a 0.0 conclusion Diouf nearly put Leeds in front as he peeled away at the back post and tested Butland with a superb header from a teasing Byram cross.  Maybe we could pinch another three points when we haven't played well after all?  Well Leroy Lita was about to scotch that theory.  He picked the ball up a good 35 yards out unchallenged and steadied himself before firing a stunning shot past the flailing Kenny.  1.0 Birmingham.  A fabulous shot but where were the midfield or the defenders closing him down and should Kenny have saved it from so far out?  Even with 15 minutes left that goal felt like a hammer blow that Leeds would not recover from and I was right.  Ryan Hall came on for his debut together with Aidey White but it was too little too late.  King nearly gave Brum a 2 goal lead when he rattled the bar with a volley near the end.   Leeds afternoon was summed up in the last minute when we got a free kick in a dangerous position.  Diouf lined up and pinged a cross straight into Butland's grateful gloves.  It finished 1.0 to Brum.

Disgruntled Leeds fans streamed away from the ground knowing full well that the well documented lack of quality in this Leeds side is seriously hindering any ambitions of competing for a top six spot this season.  Diouf and Byram apart we looked very, very ordinary across the park.  We even seemed to have lost that battling spirit that has ground out results elsewhere this season.  Difficult to see anything other than a long hard season unless we can get 2 or 3 quality players into this side.

Following Leeds United is never easy but these last three games are testing the resolve of even the hardened fans.  Another poor crowd of 22,000 today and on this evidence attendances are only going to dwindle further.  Southampton in the League Cup on Tuesday followed by a trip to Brighton on Friday.  This week won't get any easier but call me a masochist.....................roll on Tuesday.

Posted by Andrew Butterwick at 00:06