After the international break this game couldn't come quick enough for me.  Sheffield Wednesday away on a Friday night at a kick off time to appease the mighty TV gods.  So despite battling with rush hour traffic and the droves of football fans heading for Sheffield we arrived in good time for the kick off.  The Happy Chocker, Quiet One and the beer monster Jusser were all on top form as we eagerly deposited the car in the Wednesdayite car park and headed for the infamous Leppings Road end turnstiles.  That is until Jusser searched unsuccessfully for his match ticket in his pocket.  The reason he was unsuccessful was due to the fact that the ticket was still sat on his kitchen table.  Mmmm nice one Jusser.  Thankfully he was able to persuade the Wednesday ticket office he had purchased a ticket by a combination of the sight of his membership number and his endearing litttle boy lost charm.  Ticket in hand he joined us in the packed away end.

Mr Warnock had picked Austin despite his long trek to play for Jamacia and new signing Ryan Hall was on the bench.  The 5,300 away following were in good voice contributing to the highest crowd of the season so far in the championship despite the stupid kick off time.

The game started in typical derby fashion with both sides going at each other hammer and tongs.  Neil Warnock described these sort of games like "Wacky Races" and he wasn't far off with that comparison.  Certainly Neil Warnock was the architypal Dick Dastardly in the eyes of the Wednesday fans as he paraded and gesticulated in the technical area in front of the main stand. The opening exchanges were tight, fraught and laced with plenty of local derby pride and passion, ie quality football was at a premium.  Paddy Kenny provided the first concern of the night as he allowed a viciously swerving shot from the impressive Bothroyd to bounce back off the bar into his hands.  Various meaty hale and hearty challenges were flying about with Leeds players seeming to be on the end of some of the more "robust" challenges.  Michael Brown seemed to be felled by flying arm off the ball but the ref appeared not to see it.  But then again he didn't see Luciano's impression of Superman as he punched away the ball from a dangerous Wednesday cross in the Leeds box.

Diouf was the only threat from Leeds drawing a number of free kicks from the over eager Wednesday defenders.  From one of these free kicks Tonge tested Kirkland in the Weds goal with a superb shot.  The atmosphere in the ground was boisterous as you would expect for a local derby but the unjustified chanting at Dave Jones by Leeds fans and the similar abusive bile aimed at Neil Warnock by the England band led Wednesday fans did nothing for the reputation of football fans live on Sky topped off by sick chants about Jimmy Savile.  I despair at times.

As the game limped to half time and the sky summarisers were scratting round for something to talk about Wednesday suddenly took the lead.  A long throw into the Leeds box saw Bothroyd rise unmarked and head home.  Three sides of the famous old ground erupted in celebration.  A flare was thrown from the back of the main stand onto the pitch.  The stewards just laughed about it and kicked the smoking canister into the sidelines.  Mmmm wonder what they would of done if the Leeds scum had done that?  The half ended with the score 1.0 Wednesday.  Not a good half and it was difficult to see how Leeds could get back into the game.  Bizarrely the stadium announcer laughed off the flare throwing incident by reminding "Fans in the South Stand that this is a non smoking stadium, ha ha ha".  What so it's OK to throw smoke bombs about now?

Austin was replaced by Norris at the start of the 2nd half. Austin had looked tired so Norris's extra enthusiasm and pace in midfield soon turned the game back towards Leeds.  In what was becoming an increasingly scrappy and niggly affair Leeds showed brief signs of threatening Kirkland's goal.  Off the pitch the evening was about to turn nasty.  The Wednesday fans in the North stand suddenly broke out into a Galataseray song and the whole mood of the stadium changed.  Gone was the harsh local banter to be replaced by hate and anger.  Bottles and seats were thrown into the Wednesday end returned with interest by the baying home fans.  Both fans surged towards each other as stewards meandered to look mildly interested in restoring an assemblence of order.  The fuse had been lit and the minority of idiots amongst the away support wanted blood. 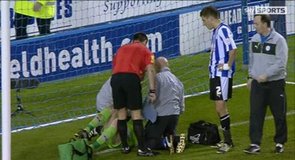 Back on the pitch the game was also boiling up to a nice conclusion.  Leeds were having a lot more joy and had two good penalty shouts turned down for handball cancelling out Becchio's Superman punch in the first half.  By now the riot police had taken up station in the corner where the trouble had started.  Peltier hobbled off to be replaced by Varney.  25 minutes left.  Could Leeds pinch an equaliser?  Well as it happens yes.  Diouf and White did well on the left before laying the ball back to Tonge who hit a screamer into the top corner.  The Leppings Lane end exploded in unbridled joy with fans spilling onto the pitch.  Get in.  1.1.  But all was not well................Kirkland was laying prostrate on the pitch.  Had a seat hit him?  Some idiot's just cracked him one and then run back into the crowd the chap behind me announced.  "If he has I bet were not going to many away games in the near future" I commented to HC.

The incident caught live on TV will have massive repercussions for the club and fans.  The knobhead who did it deserves all the grief he will undoubtedly get.  In one mindless act he has given the media and the wider football world all the ammunition they need to slaughter Leeds United.  He is a disgrace to the club as are the idiots who threw the bottles and seats.  The reports in the papers won't mention the behaviour of the minority of Wednesday fans in the North stand who were just as culpable in an incident that will stain Leeds United's already tarnished reputation even further.

The game finished 1.1 but all the talk will be about the Kirkland incident and the behaviour of the Leeds fans.  Listening to Radio Sheffield as we waited to clear the car park gave us a taste of things to come.  Dave Jones called all Leeds fans vile animals and a succession of fans rang in to vent their spleen at the most hated fans in the country.  I can not defend the indefensible and the actions of a minority of Leeds fans  have brought shame on the club I love.  We don't half make life difficult for ourselves.

I hope Mr Kirkland recovers from his experience quickly.  With regards the football Bothroyd was the stand out player with Diouf once again shining for Leeds.  Pearce and Lees battled well at the back whilst Norris had a good half when he came on.  Unfortunately the papers won't be talking much about matters on the pitch after this one.  Charlton Athletic at home next.........that is unless we get docked 35 points and have to play behind closed doors for the next decade as a result of Mr knobhead's actions.  Hope he's happy with himself.