Optimistic expectation filled the soaking West Yorkshire air as we joined the masses heading for Elland Road for this League Cup quarter final clash with the current Champions of Europe.  Mrs MOT and daughter Sarah were with me as we battled with the traffic to get to the ground on time.  This was not your usual midweek night match.  There was queueing traffic and a scramble for car park spots.  This is what it used to be like when we sold out most games..........when we were in the Premier League.

Once parked we contemplated our chances in The Drysalters with the obligatory pre match refreshments in the company of Jusser.  Everybody was hopeful after all Chelsea had only just got back from Japan and God was once again proving he is a Leeds fans as he delivered some awful persistent rain just to level things up.  A capacity crowd baying for Chelsea's blood was the final ingredient in a heady mix that had "possible cup shock" written all over it.  Then we saw the team sheet.  Torres, Mata, Cech, Lampard, Luiz, Ivanovic, Oscar and Moses were all starting.  Suddenly the sobering reality that we playing their virtual first choice team hit home. Weren't they supposed to be playing some of their reserves? Just the sort of sneaky trick those southern fancy dan's will play.

So as we hurried through the freezing rain to take up our seats thoughts of the battle in midfield of Mata v Brown and Lampard v Tonge with Oscar and Moses dancing round the periphery took the edge off my optimistic mood.  On the Leeds side Warnock had continued to give Ashdown the goalie's jersey in the League Cup and with Tate cup tied Pearce came back into the back four.  Still if we get stuck into them anything's possible?  A full Elland Road is an intimidating arena and tonight was no exception as the game got under way.  Within seconds "Get your father's gun" was welcoming the 3,000 Chelsea fans as Leeds came out of the blocks with all guns blazing. 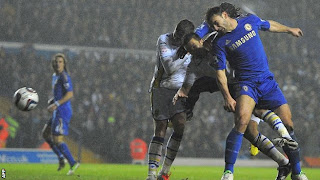 The aristocratic European Champions were clearly rattled by an eager Leeds team with Michael Brown in the midst of most of the action in the first ten minutes.  Diouf got behind the Chelseas back four and swung a dangerous cross in that Cech gathered safely.  At the other end Ashdown showed he is a capable deputy for fan's favourite Kenny as he dealt expertly with a stinging shot from Moses.  15 minutes gone and Leeds' high tempo approach was bearing fruit. The rain continued to bucket down and although the visitors had by far the superior players it was the home side who were gaining in confidence going forward.  With all the history between the two teams I expected a feisty encounter but it was the Premier League team who were dishing out the elbows and late tackles. Lampard went in the book for a clumsy challenge and  Luiz was lucky not to follow him into the book when he felled Brown with his elbow.  Funny I thought that was a red card offence?

Moses tested Ashdown once again drawing an even better save from the stand in keeper as Chelsea's class began to ooze to the surface.  They were starting to play with a swagger that befits the European Champions especially David Luiz who showed his liking for playing the ball out of defence and dribbling at the opposition.  A high risk strategy you don't often see in the championship.  Mrs MOT was intrigued with Luiz.  "That player with the long curly hair thinks he's better than he really is" she piped up.  Mmmm "I tend to agree darling" I said, or words to that effect, and added "if he keeps messing about with the ball at the back he'll make a mistake" or words to that effect!  Sure enough minutes later the curly haired arrogant one was doing his impression of Messi as he carried the ball deep into the Leeds half only to lose it to the Leeds midfield.  The ball was quickly spread wide to Thomas who raced towards the Chelsea box.......the crowd rose in expectation as he sped past the flailing defender and played the perfect ball into the path of Becchio who finished perfectly giving Cech no chance. Get in! 1.0 Leeds and the roar that engulfed Elland Road brought back memories of the time not so long ago that we heard the same roar week in week out.

"Luciano, Luciano, cost less than Torres and he scores more goals" rang round the stadium as the blues fans were left in stunned silence. The fat Spanish waiter also got a reminder that he will be sacked in the morning at this rate.  Mint.  The cup shock was alive and well in West Yorkshire.  Minutes later Leeds so nearly snatched a 2nd as Lees headed inches over.  Lampard reminded Leeds that Chelsea hold a pretty powerful armoury as he sent a dipping shot goalwards that Ashdown did well to keep out.  The half time whistle went and Leeds trooped off to a thunderous ovation.

The urinal philosophers were happy but cautious. "we can do these bastards" one punter offered. "Brown must have a twin because that's not the same Brown I've seen play before" one fan commented on Brown's stirring first 45 minutes. "Ashdown's kept us in it" muttered one fan.  So one nil up and 45 tantalising minutes from a famous victory and a place in the Semi's.  Of course if football had a heart that is exactly what would have happened.  I would have shouted myself hoarse as Leeds battled to hold onto their precious lead through adversity and an ever increasingly desperate Chelsea side.  Ashdown would have continued to perform heroics and Ross Mac would have sealed victory with a break away goal in the 90th minute.  Elland Road would have been a cacophony of unbridled joy and the wealthy Southerners would have skulked home back down the M1.  But they didn't.

What they did do was the worst thing possible and equalise within a minute of the restart as Ashdown failed to keep out a Mata shot.  The game then opened up and was end to end for twenty minutes, mainly at the Leeds end though as Chelsea moved up three gears and took control of the game.  Their talented midfield run riot and goals by Ivanovic and Moses just after the hour killed the game.  Two more goals flew past Ashdown without reply as Leeds succumbed to the onslaught from a Chelsea side who were now slicing through Leeds at will.  Final score 5.1 Chelsea.  In the end Leeds were outclassed totally by the West Londoners.  If this is the standard we aspire to we have light years yet to travel. Mata, Oscar and Moses ran the show in the 2nd half and when Hazard joined the fray Chelsea applied their afterburners and left Leeds standing.

On to the Middlesboro game now.  Hope we can pick ourselves up and bag another three points against the ex Yorkshire team from Teeside.  We've seen the future tonight.  I wonder if our new owners have the bottle  and the brass to take the mighty whites to the promised land?  Time will tell.

MOT.
Posted by Andrew Butterwick at 00:28