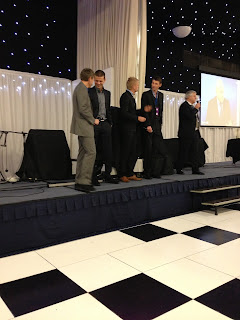 After last week's disappointment against the Rams the Tractor boys of Ipswich offered Leeds the chance to return to winning ways as they met at the Theatre of Hope for this championship clash.  Once again the trend of dwindling crowds at the once fortress Elland Road continued as a measly 19,000 fans chose attending the game over Xmas shopping or just plain apathy. The members bar was buzzing though.  The Norwegian whites were in town accompanied by Gunnar Halle, Tore-Andre Flo, Eirik Bakke and Alfie Haaland. The ex Leeds stars followed Paul Reaney on stage as they joined Lorimer to give their views on the current state of Leeds United and their time at Elland Road. Once again fans were given a tantalising reminder of past glories by the guests in the members bar. With the deadline date for the completion of the GFH deal due this week I wonder how long it will be before we have some new glories to celebrate?

Warnock had brought Diouf back into the starting eleven at the expense of Ross Mac and replaced Ryan Hall with Thomas in an otherwise unchanged team.  Captain Peltier remained in the problematic left back spot. The general mood amongst the gathered clans of the TOALF group was positive. I was optimistically punting for another 2.1 win after pocketing my winnings from the same score against Palace.  The teams were led out by the returning heroes of The Yorkshire Regiment and the game was under way.

Leeds started brightly with Diouf at the hub of most of Leeds moves in the first ten minutes.  News that he had signed an 18 month contract this week had sent a nice shot of pre Xmas adrenaline through most supporter's veins.  He nearly repaid some of the fee when he got beyond the Ipswich back line only to be denied by Henderson in the Ipswich goal.  Going forward Leeds were looking dangerous with Diouf, Green and Thomas all probing the delicate Tractor boys defence.  Mick McCarthy's team had a clear strategy to stop Thomas and that was to kick him every time he got the ball which worked well with an unusually lenient referee.  The game was very open and Ipswich broke quickly usually down their right flank. Pelts looks very uncomfortable at left back and with Thomas surging forward at every opportunity Ipswich began to exploit the yawning gaps.  Better strikers than DJ Campbell and Murphy would have made Leeds pay for their generosity.

Leeds were in front on 18 minutes.  Tom Lees rose to head a corner goalwards and Thomas flicked the ball past Henderson. 1.0 Leeds.  Who says we never score from set pieces?  Well actually I do because we very rarely do but today was the exception to the rule. The goal settled Leeds down as they pushed forward looking for more goals but Ipswich continued to get inspiration whenever they attacked. DJ Campbell had the ball in the net from an offside position and Kenny pulled off a couple of decent saves to keep the Leeds goal intact.  "Mmmm we need another goal" HC muttered as the game approached half time.  He was right and we should have had that priceless goal as Becchio somehow headed over from a superb Byram cross.  I would have put my mortgage on him scoring with his head unmarked from 7 yards out.  Other chances came and went.  Ipswich somehow scrambled the ball off the line after good work by Diouf, Norris and Tonge.  Half time 1.0 Leeds.

With the stadium half empty the atmosphere was very flat.  The game itself wasn't the best but entertaining enough to deserve more noise and passion from the crowd.  Frustratingly the noise and passion that will be generated by a full house on Wed when Chelski roll into town is just what is needed for every game.

Thomas, Green and Diouf continued to shine for Leeds with Becchio leading the line well despite his miss in the first half. Diouf tried a spectacular volley from a tight angle that fizzed over Henderson's bar.  Ipswich were getting more of a grip of the game though as Leeds seemed content to play an open end to end game.  Problem was we were only one goal up and as the saying goes "it only takes a second to score a goal"  Kenny was busy keeping the illusive clean sheet and as the game approached the hour mark HC made a terrible faux pas by announcing "I can seeing us getting a clean sheet out of this"  "Mmmm not now you've said that" I responded or words to that effect!.

Chopra replaced the ineffective DJ Campbell and added a spark to Ipswich's play.  I was getting nervous as Leeds generosity in giving possession away reached gigantic proportions.  Then just when I was fearing the worst Leeds scored the killer second goal. Thomas danced into the Ipswich box and laid the ball back with outside of his foot for Green to hit the perfect shot into the top corner of the stationery Henderson's goal. Get in! 2.0 Leeds.

With just over twenty minutes left Leeds looked to close out the game but with a distinct lack of ability to keep the ball from a very average Ipswich team Leeds made what should have been an easy task difficult. Becchio had a good effort saved by Henderson as Leeds continued to attack.  Brown came onto shore up the midfield in place of Thomas, Ross Mac replaced Diouf and Varney replaced Becchio with minutes to go.  Ross Mac looked lively and nearly ground out a third goal. Kenny did well to keep that illusive clean sheet after all as the lively Martin and Chopra tested the Leeds favourite with late chances.

A workmanlike performance from Leeds yielded a fourth win in five for the mighty whites.  Definitely promotion form if not quite promotion like performances.  Ipswich will feel they could have got something from this game but their lack of fire power was their downfall. Green was the man of the match with good supporting roles from Diouf, Byram and Tate.  Chelski up next in the League Cup Quarter final.  A full Elland Road will generate a slightly different atmosphere from today.  Will it inspire Leeds to a famous victory? I think it might just.  Bring it on.

Posted by Andrew Butterwick at 12:03