As the first day of 2014 dawned bleary eyed from the previous night's excesses Planet Leeds had a positive feel about it. For the first time in a decade there was a spark of real optimism in the air with affairs off the field finally beginning to resemble a well run Football club whilst on the field Brian McD has assembled a platform that with sensible investment should provide a realistic challenge for the heady heights of promotion. The key will be the success or otherwise of the next 4 weeks activity in the transfer market coupled with continued development of the key members of the existing squad. 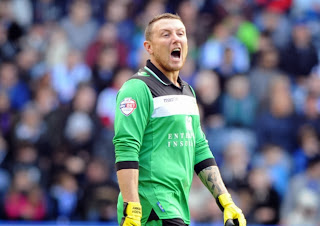 Blackburn Rovers were the visitors to the Theatre of Hope for the first game of the new year. As ever the Happy Chocker and the Quiet One were on board as we pointed the car down the M62 towards LS11. The normal New Year's Day delicate atmosphere didn't stop a healthy debate on the up and coming starting line up. Would Kenny recover from his clash with Halford at Forest? Has Ross Mac's hamstring loosened up enough for him to start? Will Mowatt return to a midfield crying out for creativity? Other matters also found their way into the conversation. Fireworks for New Year, yes, but not at 3.30am............Will we win the price of our Season ticket back in the latest fan friendly initiative from David Haigh? And the perennial question of are Scottish footballers more likely to have a "convenient injury" over the New Year period?

The team news confirmed that Paddy had passed his fitness test and both Mowatt and Byram returned to the starting XI at the expense of Brown and Peltier. The depressing, grey weather couldn't dampen the spirits of the 30,000 fans who had braved their hangovers to witness the latest game of Leeds' championship campaign. The game kicked off with the wind swirling and rain lashing down. Leeds took the early initiative as Smith forced an error from a Rovers defender that released Austin to stride away towards the Rovers goal but his shot was blocked by Dann and the ball spun away for a corner. Blackburn as they did at Ewood Park flooded the midfield leaving the £8m man, Rhodes, alone up front. The Blackburn midfield were quick to break and support him though with Cairney and Taylor forming an effective link to test the Leeds back three. Blackburn gave Leeds ample warning of their attacking potential as Cairney swung a corner into the Leeds box for Hanley to head inches over the bar. Minutes later Cairney drifted past a Leeds challenge in midfield before slotting a perfect ball through for Rhodes to collect and finish in some style past a helpless Kenny. 1.0 Blackburn after just 12 minutes. This wasn't the start to 2014 I had envisaged.

Mowatt responded quickly for Leeds as he weaved his way through the Blackburn defence before bending a left foot shot that tested Eastwood in the visitors goal. But it was Blackburn who looked threatening every time they attacked. Ben Marshall ghosted into the box but his shot was deflected for a corner. The corner caused palpitations for many home fans as another header soared goalwards. Alarm bells were now ringing in my head as another typical Leeds festive performance unveiled in all it's gory detail in front of my eyes. Tom Lees cleared a Campbell shot off the line as Blackburn dominated the game. Leeds did have a difficult chance as Smith so nearly connected with a fizzing Pugh cross but the momentum was with the Lancashire side as they piled the pressure on Kenny's goal. The inevitable 2nd goal came when Cairney swung a corner into the 6 yards box for Gestede to head firmly down into the net. 2.0 Blackburn and Leeds were in danger of being swamped. Blackburn should have a had a penalty when that man Cairney slotted another slide rule ball through for Gestede who was tackled from behind by Murphy. Boos rang out from the frustrated home fans as the half time whistle blew. Leeds were lucky only to be trailing by 2 after a half in which they were well and truly second best. 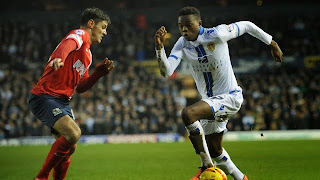 Brian McD replaced Murphy with young Ariyibi at half time in a desperate attempt to wrest back the advantage from Blackburn. His inexperience is there for all to see but he has got pace and within minutes of the restart he was on hand to attempt a lob back into an open net after a Pugh cross but the ball  sailed harmlessly over the top. Leeds had come out with a bit more fire in their belly's though with Byram clearly looking to attack down the right. He swapped passes with Ross Mac on the edge of the box and chased down a ball that the defender should have cleared but young Byram's foot steered the ball to Smith who gratefully passed the ball into an empty net. 2.1 and game on!

Leeds now had a head of steam helped by a fired up home crowd after some strange decisions by the referee. Smith was bundled to the floor as he attempted to chase a lovely through ball. No foul! Ross Mac was next to be impeded without even a foul given never mind a yellow card. The crowd were now baying for the ref's blood as Leeds looked for an unlikely equaliser. Mowatt had a chance to send the crowd into ecstasy as his shot cannoned off the bar from 8 yards. Soon after Ross Mac's header hit the side netting as the pressure built on the visiting goal. Surely we couldn't rescue a point after the first half battering we took?

The game entered the last 10 minutes with both teams looking to score. A Rhodes header clattered Kenny's bar whilst Poleon had been thrown on in place of Lees to try and get the vital goal. Shots from Austin and Ross Mac raised expectation levels in the kop but as the game went into 5 minutes of added time I had that all too familiar feeling as the game slipped through Leeds fingers giving Blackburn a deserved victory. Full time 2.1 Blackburn.

If Brian McD needed evidence that the team needs an injection of quality this was it. Blackburn are below us in the table and on paper have a better but also a more expensive team. They controlled the game with ease in the first half and we had no answer. Our ability to break teams down, especially those who get men behind the ball, is very limited with the current personnel. It won't take many additions to change that but without it we will struggle to challenge for the top six in this ultra competitive league. A disappointing festive run of games has become the norm in recent years and this year has been no different. Hopefully the difference this year is the response in the January transfer window?

MOT
Posted by Andrew Butterwick at 19:16