Leeds United end on a high against play off bound Derby.

The sun had got it's chilly hat on as the Happy Chocker, Quiet One and yours truly boarded the Leeds train for the last time this season. After a mini recovery of 3 wins in 4 games had steered Leeds clear of relegation Derby provided the opposition for Brian McD's charges final game of a hugely frustrating season. Prospects of finishing the season on a high weren't good. Derby were seeking their 11th straight win against the  mighty whites and to extend a run of 5 wins on the bounce in the championship something that wasn't lost on HC. "There's more chance of Jeremy Clarkson becoming the next chairman of the Equality and Human Rights commission than we have of beating Derby" Mmmm he had a point?

With the likelihood that this would be Brian McD's last game in charge at Leeds his team selection was eagerly anticipated. He had suggested that the squad would be bursting with academy players but in the end the starting eleven had a familiar ring to it. Walters, Thompson and Dawson made it onto the bench but other than that the team was unchanged from last week's victory at Brum. The tingle of anticipation amongst the 29,000 crowd was there for all to see as we made our way to our seats. It might be an end of season game with nothing at stake but try telling that to the baying fans from each side. This was real Football warts and all. 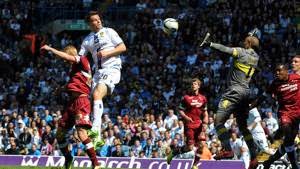 Derby started well. Forsyth sent a stinging shot goalwards that tested Butland to the full before Dawkins poked in a soft goal after just 5 minutes. 1.0 Derby and the game had hardly started. Derby in the form and confidence they oozed could do Leeds some serious damage I mused. Leeds struck back well though and although Derby continued to look dangerous on the break Smith carved out a couple of great chances with his head in between a stinging block on a shot from Tonge. This was a lot more positive from Leeds than we were used to. On 30 minutes Brown advanced towards the Derby goal and unleashed a searing shot that Grant only just managed to punch away. This was good from Leeds but they looked ever so exposed on their right flank with Austin playing in the unfamiliar right wing back slot. Derby continued to exploit this weakness and but for some resolute defending and hesitant finishing could have doubled their lead.

Brown was relishing his battle in midfield with the blonde haired Derby star, Hughes, though. They were at each others throats like two whirling dervishers and remarkably Brown was getting the upper hand. Whether he was playing for a new contract or just for the hell of it the crowd were warming to Mr Brown's best game for a long time. The game was very open and Ross Mac and Smith both went close with chances as the half progressed. Add that to two headers cleared off the line and suddenly Leeds were having the better of the game. 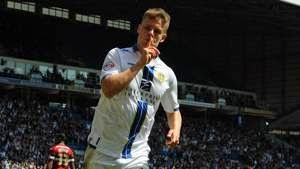 Half time arrived with Derby still leading 1.0 but apart from the glaring gaps on Leeds right the home team were looking good. Brian McD clearly saw the error of his ways at half time and swapped Murphy for White and move Austin into central midfield. White was now in the right wing back spot. His extra pace going forward immediately caused Derby problems as Leeds flew at Derby throwing caution to the wind. On 50 minutes they got their reward as a quick break saw Ross Mac dance away from his marker before threading a lovely ball through to Smith who delicately chipped the oncoming Grant to draw Leeds level. 1.1 and no more than Leeds deserved. the atmosphere in Elland Road was now electric as Leeds went for the exposed Derby jugular. Brown went on a weaving run that ended up with another shot goalwards that had it gone in would have brought the house down. Smith fired over from 12 yards after good work by Pugh. Smith rose and headed wide from a Ross Mac cross whilst the classy Bamford tested Butland at the other end. We were witnessing one of the better games of the season from the men in white and the crowd were lapping it up.

Leeds continued to have the better of the contest and when Pugh found himself unmarked at the back post he should have done better with his header. Minutes later it was Pugh who turned provider as he found our top marksmen unmarked with an exquisite cross but Ross Mac's header was saved by Grant. Leeds pushed forward for a final assault. Ross Mac squirted a shot goalwards but Grant fumbled the ball.......Smith was just too far to convert what was the final Leeds chance. The game finished 1.1 but with 28 shots and 11 on target Leeds had gone out on a high against an excellent Derby team who looked good enough to have a successful play off campaign. 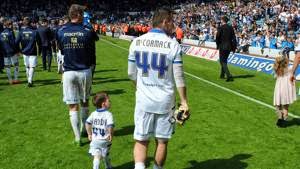 There were smiles on the faces of the Leeds fans as the team took their end of season lap of honour something that looked highly unlikely just 5 short games ago after our 3 goal drubbing at Watford. Matt Smith was my man of the match after another inspiring display. Don't be surprised if at this time next year he's picking up the player of the year award. Michael Brown had his best game in a Leeds shirt keeping the talented Mr Hughes relatively quiet. This was a surprisingly positive performance from Leeds against a team of real class.

We were joined by Keith for our traditional end of season drinks and meal as we reflected on a another frustrating season. Much debate regarding the best away performance, Charlton, and best home performance, Birmingham. Player of the year could only be Ross Mac with special mention for Matt Smith who has developed into a real threat and handful up front. For me we are sadly missing some midfield creativity and guile something the new manager will need to address if we are to progress.......Yes I know BM is still in the chair but everything points to a change of coach before the next two weeks are done.

So that's it folks for another season, one that started with high hopes but floundered on the rocks of too little quality. Thank god for Ross Mac's goals. I hope you have enjoyed my ramblings and musings this year and hopefully we can do it all again next August. Not the most memorable season but as ever following Leeds there were plenty of ups and downs. Next year will be different though. If we can just get a decent midfield general and maybe another centre half.........................

Roll on next season.


Posted by Andrew Butterwick at 20:49

Cheers for the blogs all season Andrew!
I dont bother with tabloids nowadays as I'd rather hear an honest appraisal of the game if I havent managed to get there or even if I want a second opinion.
Roll on next season, Can't Wait!
Quippy

Thanks as always for your sterling work. This is always my first port of call after a game (and since I live overseas these days, it is often about as close as I can get to being there).

As you say, roll on next season (I certainly won't be sad to see this one roll away!)

Top blogging.
Thanks.
I live in Australia and your blog is the first write up of the Leeds games that I read.

Dom and Anon,
Glad you enjoy my ramblings,
MOT


Another enjoyable report and a pretty decent effort on the field too from the team in the hopefully soon to be 'Embassy' stripe shirt. Totally agree about Ross and Matt Smith, I hope both are there in August to lead the line. Many Thanks for letting join the 'gang' for it's end of season drink and eat. Made it a memberable day.
Cheers Andrew for showing us the funny side of a mostly forgettable 2013/14 season. Hopefully members card in hand I'll join you a few times away from home. Can't wait too. Cheers lads

Keith,
Have a good summer and recharge your batteries ready for the next campaign.
MOT

Andrew,Thanks for all the posts this season.

I admire your enthusiasm through adversity in what has been another hugely disappointing season.

The next couple of months will see just how much difference Cellino's reign will make and wee definitely need a Collins/Strachan type character in midfield.

Enjoy the sunmmer, don't expect too much from the World Cup.

Keep up the good work,your blog is the only honest opinion of an actual fan out there.

Anon,
Thanks for your comments. I suspect Cellino will restructure the club and reduce overheads drastically......something we need really. Far too many players on large salaries doing nothing, not enough joined up thinking behind the scenes. GFH have been a disaster.
MOT

Once again the most honest reporting of the mighty whites. Thanks for a fantastic service in what was a pretty dire season.
Enjoy your your summer for next season will be ours.

Keep up the good work. Let's hope we get through this financial rough patch and can improve the squad overall.