A lunchtime kick off in England's 2nd city meant an early start for the Happy Chocker, Quiet One and yours truly as we headed to York to catch the cross country train for the latest episode in Leeds United's rollercoaster season. Neil Redfearn was still in the Head coach hot seat for this one despite rumours linking virtually every ex Leeds player in the last 20 years to the job. With rumblings from Football League headquarters of further sanctions against Cellino and Leeds United there was the inevitable air of rebellion and resistance amongst the long suffering Leeds fans heading to St Andrews. Anticipation of a Leeds debut for the much vaunted Brazilian, Adryan, together with another host of acadamy starlets in the squad helped the pre match refreshments go down with a strangely warm feeling. After all the turmoil in the club have we finally got the basis of a decent team at the mighty whites?

Not surprisingly the fit again Berardi replaced Wootton at right back in the only change from the Bolton game. Doukara and Adryan were on the bench. The sun was peeking through the grey Brummie skies as the game got underway with the boisterous Leeds fans in full voice as per usual. The opening exchanges were cautious from both sides. Leeds stuck to the Redder's passing game to try and prise open the Blues defence but whilst the ball moved elegantly between Gold shirted players often the final incisive ball went astray or Sharp and Antenucci strayed offside. Shea caught the eye for the home team and not just because of his weird haircut as he gave the Leeds defence some early problems with his intelligent running and good early touch. It didn't save him from the harsh humour from the away fans though "he's got bird shit in his hair" warbled the massed Leeds fans behind Silvestri's goal.

The half hour past with not too much action to get the adrenaline going although Cook did raise the away fan's pulses with a lovely mazy run ending with a shot just wide. The stalemate on the pitch meant the majority of the travelling support locked onto the young steward with a bright shock of Ginger hair sat behind the Leeds goal. Advice ranging from using Factor 50, getting out of the sun and pulling the young female steward by his side was generously given to the young lad. I thought calling him a shit Billy Bremner was a bit much though!

Back on the pitch the game sparked into life. An innocuous through ball towards the Blues forward, Wesley Thomas, saw him roll Bellusci far too easily on the edge of box before finishing with some aplomb into Silvestri's top corner. The home fans erupted as the net collapsed with the force of the shot. 1.0 Birmingham. The problem with net was similar to what most Sunday league clubs have each week but the time it took to fix was farcical. The impatient Leeds fans first suggested that our Ginger friend sorted it out before declaring "We're Leeds United we don't need a net". After nearly 10 minutes delay the game resumed with Leeds feeling slightly aggrieved to have conceded after having the majority of the possession in the first 36 minutes.

The delay took some of the sting out the game as the game limped to half time. Bellusci nearly caught Silvestri out with an interesting back header before the break. Half time 1.0 to the Blues. The first half performance was encouraging in the way Leeds had passed the ball but too often we were let down by the final ball. Mowatt, Cook, Antenucci and Warnock all had decent first periods whilst Berardi gave the team a lot more balance with his ability to go forward.

Ex York City man Clayton Donaldson hit the side netting early in the 2nd half as Birmingham looked to put the game beyond Leeds. Shea quickly followed with a header and a shot that had the away fans grimacing but the score remained 1.0. The game was opening up now and Birmingham grew in confidence. Leeds could only manage a badly sliced shot by the misfiring Billy Sharp and that feeling of desperation started to creep into the travelling fan's minds. Then just when the game seemed to be slipping away from the mighty whites Leeds got some much needed inspiration from the impressive Mowatt. Yet another good passing move from Leeds found Mowatt 25 yards out and he thundered a stinging shot that Randolph parried away to safety. This lifted the crowd and all of sudden it was Leeds looking dangerous. Redders freshened his team up with the introduction of Austin and Doukara in place of Sharp and Sloth and both subs made an immediate impact.

Austin injected some pace into the midfield whilst Doukara showed some lovely touches as he dropped deep to pick the ball up and attack the now vulnerable home defence. On 66 minutes he danced into the Birmingham box and fired a shot just wide. The momentum was definitely with Leeds now but the Blues sub, Gray, soon had the Leeds defence back pedalling as he wriggled through and fired a low shot to Silvestri's left.

Leeds weren't to be denied though. Another multi passing attack saw Berardi whip a dangerous cross into the heart of the home defence...............they failed to clear as Mowatt picked up the ball and drove strongly into the box before sliding the ball past Randolph for a deserved equaliser. The away end exploded with joy as the 3,000 travelling fans celebrated uncontrollably. 1.1. The goal sparked a frenetic end to the game with Gray causing havoc in the Leeds defence with his quicksilver runs. One of which ended with a dive in the penalty area that Tom Daley would have been proud of. Thankfully the ref was of the same opinion and booked him. At the other end Leeds went agonisingly close to the winner when Mowatt headed a cross back across the gaping goal but no gold shirt got near it. Austin powered forward on a couple of barnstorming runs but all to no avail. Birmingham so nearly pinched it at the end as a header from Thomas went just wide after a good challenge by Bellusci. The game ended 1.1. 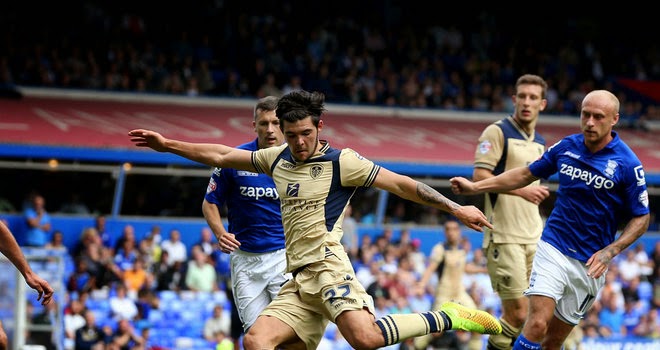 In the end a good point after being a goal behind and an encouraging performance from Leeds. Rome wasn't built in a day and the rebuilding of this team will take time. Patience, something in short supply at Leeds, will be needed though. After the young Ginger haired steward I thought Mowatt was the man of the match. That's something I didn't think I would saying this season. Cook again showed maturity beyond his years and Doukara showed some lovely touches. Antenucci needs to time his runs better to avoid the offside flag but his all round play is very promising. All in all more positives than negatives from the game.

If we can continue the style of play into the Bournemouth and Uddersfield games we should start to pick up points. No sign of Adryan today. Presumably we will ease him in gently to the harsh pace and rough and tumble of the Championship. Despite all the turmoil off the field the team is starting to gel together. Roll on Tuesday and the beam back game in the members bar.


Posted by Andrew Butterwick at 20:57

Top report on the ginger steward; thank God he was a good sport about it because he got brutalised without pity! We also got done on Brentford tickets; not thrilled.

Top post as always, just hope from now the level of pessimism about the team starts to drop. So many changes and a new formation it has to take time. The promise and style of football gives me real hope for our future. Now all we need is a new head coach, the tax situation in Italy to get sorted and Harvey to get a just comeuppance.

Once again superb blog commentary. So important for an exiled Leeds fan in Singapore.

Thx for the comments. A flickering light at the end of tunnel me thinks. Just need a bit of patience now for the team to gel.