After disembarking from P&O's Oriana at the crack of dawn and making a stressful dash from Southampton cruise terminal I arrived just in time for Leeds United's latest championship clash with Blackburn Rovers. "Much happened since I've been away" I enquired of the Happy Chocker as we dissected yet another crazy week in the history of Leeds United. There have been some eye watering decisions taken by this regime and others in the past decade but the suspension of Redfearn's assistant Steve Thompson for "under performing" must rank as the most bizarre decision ever. It has galvanised the Leeds support though in mass incredulity. I mean under what logic do you undermine the Head Coach by dismissing his assistant without his consent unless you want rid of him as well? All this after Redfearn and Thomspon have steered the club away from the relegation mire with an impressive string of results since the new year. I don't know what Cellino and his senior management team are trying to achieve but I do know whatever it is it is not in the long term interests of anyone who has the best interests of Leeds United at heart.

Despite all the off the field distractions Refearn had pulled a team together to focus on the task in hand against Blackburn. Morison replaced Sharp and Austin returned in place of the injured Cook as he deployed a 4-5-1 formation to try and counter the threat of the Lancashire side. Before the match there was a poignant minute's silence on the 15th anniversary of the murders of Christopher Loftus and Kevin Speight on that tragic night in Istanbul. Gone but never forgotten.

Leeds started the game well with Austin buzzing about effectively in midfield and Murphy getting his foot on the ball to try and inspire a slightly lethargic Leeds team. The Elland Road crowd pinned their colours to the mast with early chants in support of both Steve Thompson and Neil Redfearn both of which the Leeds Head Coach responded to appreciatively. Leeds had an early penalty shout turned down after an apparent hand ball before Taylor fired Leeds first shot on target into the hands of Raya in the Rovers goal. Murphy also shot horribly wide after good work created a chance on the edge of the box but the away side soon showed their threat as the impressive Cairney slid Rhodes in with a pin point ball only for a desperate Bamba leg to divert his shot onto the bar. 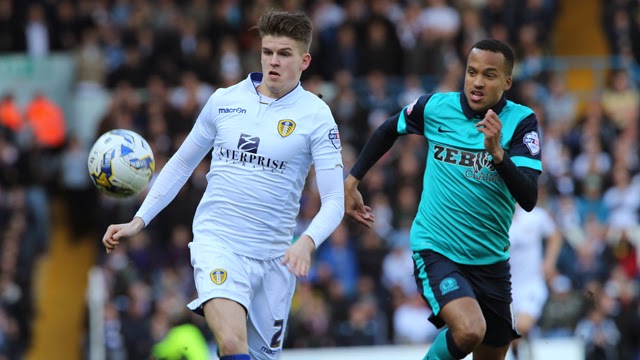 The game had a large dose of "end of season" written all over it but both teams attempted to spice up proceedings. Gestede flung himself at a dangerous cross but just failed to connect whilst at the other end Austin did connect with a firm cross but his header sailed over the bar. Byram then had a thumping shot blocked and deflected away for a corner. Little did we know this would lead to the game changing moment. As usual the corner didn't result in a goal as the ball found Morison at the back post but his feeble effort came to nothing............but the linesman had seen something amiss in the box and next thing the referee was waving his red card at Austin? Nobody knew why but clearly the linesman had seen something dramatic and Leeds were down to ten men. The game remained goalless until half time.


The first half was very one paced and crying out for some creativity from both sides. Cairney showed glimpses of what he can do but Leeds were struggling to get a grip of the game. All in all a very forgettable 45 minutes other than the red card incident. The mystery over Antenucci's absence from the starting line up and allegations of interference from above to stop him playing and scoring the required goals to secure a new contract deepened especially with a woeful first half showing from Morison.

Blackburn started the 2nd half looking to break down the ten men of Leeds. Gestede tested Silvestri with a low shot as gaps started to appear in the Leeds defence and midfield. Ben Marshall rattled the Leeds woodwork as Bellusci and Bamba began to look ever so vulnerable as the Lancastrians smelled blood. On 62 minutes They took the lead after Cairney returned a partial clearance sweetly into Silvestri's net. This from a player who Leeds let go from the academy because he wasn't good enough?

Redfearn reacted boldly to going behind by sending on Antenucci and Copper on in place of Barardi and Wootton as Leeds changed to a 3-4-2 formation. Unfortunately the substitution back fired spectacularly as Cooper gave away a simple pass to set Blackburn on attack. Cooper's howler was compounded by Bellusci trying to take out the Blackburn winger Brown and failing miserably. Brown then clipped the ball into the box for the unmarked Rhodes to head home easily. 2.0 Blackburn and suddenly my early morning dash from Southampton looked in vain as Leeds self destructed with some style.

Spearing added a third with ten minutes remaining just to add salt to Leeds' terminal wounds after another loose Cooper pass coupled with Bellusci again failing to make a tackle as Blackburn raided the generous Leeds left flank. The game finished 3.0 to Blackburn but could have been 4 or 5 as the away team took advantage of the dispirited ten men of Leeds. Strangely Sharp came on for the last five minutes in place of Morison after the misfiring centre forward had had an awful afternoon where he didn't seem capable of winning a header or choosing the right run into the box for the few chances we had. Leeds managed a paltry 2 shots on target all match. Enough said.

This was a bad capitulation to end a bad week for Leeds. All the good work since Xmas seems to have been lost over the international break and now we head for in form Wolves on Monday without Cook and Austin. That could be very messy on the evidence of today and with Redfearn's future hanging by a thread yet again Leeds are a club in turmoil drifting aimlessly under the stewardship of incompetent owners. Will we ever get any stability and sensibility in the leadership of our football club?

Posted by Andrew Butterwick at 19:21