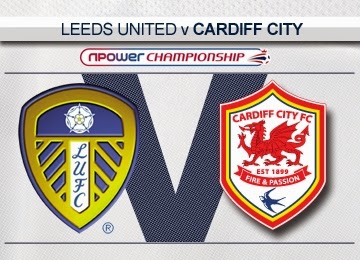 Another week rolls by on Planet Leeds and as usual the off the field circus has dominated the chatter on social media. Has Salerno been sacked, resigned or neither? Have Red Bull put a bid in for Leeds or not? Is Cellino going to buy Parma? Will Redfearn be in charge next season? As if that wasn't enough we ended the week with a public spat with today's visitors Cardiff City over their ticket allocation as the Welsh club returned all 500 unrestricted tickets after initially refusing an allocation 1000 tickets with restrictions. Another PR disaster for Leeds.

Redfearn had recalled Bellusci to the defence in place of Cooper whilst Phillips retained his place in midfield after his debut at Wolves. Morison was on the bench. The away end wasn't entirely empty as at least a 20 stewards and police patrolled the area diligently keeping an eye on the 4 Cardiff fans who somehow had got tickets. Will they be blacklisted for the next away game I mused to the Happy Chocker? The game kicked off with both teams securely entrenched in mid table with no end of season worries about their position in the table. 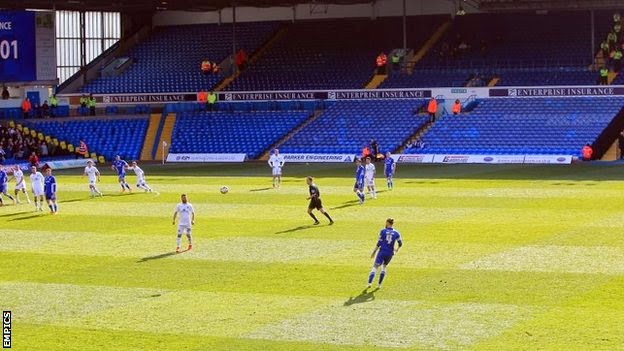 The Bluebirds started brightly with Mason and Noone to the fore as they attacked the kop end. Leeds took time to settle but on 10 minutes a lovely flowing move carved out a golden chance for Barardi on the left but instead of putting his foot through the ball he took about 87 touches before a Cardiff player blocked his eventual shot...............was it going to be another frustrating day for followers of the mighty whites? Charlie Taylor followed this with a speculative shot that went wide before Mason opened up the Leeds rearguard with ease only for McAlney's shot to be blocked by a last ditch tackle.  Ex Leeds captain Lee Peltier took the resulting corner perfecting a well rehearsed routine leaving 2 men unmarked at the far post. One of them, Morrison (not ours), stabbed the ball home from close range with Silvestri rightly berating his naive defenders. 1.0 Cardiff and an eerie silence shrouded the ground apart from a ripple of applause from the Cardiff 4.

After conceding 7 goals last weekend and yielding another after just 13 minutes things didn't bode well for the remaining 77 minutes if the Blackburn game was anything to go by. The blustery conditions were causing problems for both teams but not young Kalvin Phillips. Taylor finished off good work down the left with what can only be described as a high cross that just kept getting higher as the wind grabbed the ball and sent it skywards. Phillips reacted perfectly to meet the ball when it returned to earth and side footed the ball into the Cardiff net for the equaliser. 1.1. Another product of the Leeds United academy conveyor belt celebrating his first senior goal. For all the average Serie B players in Leeds ranks it's a bloody good job we have the academy boys gluing the team together at this moment in time.

The game wasn't overflowing with guts and determination from either side but Leeds were looking positive. Bellusci went close with a header before Byram had his usual back post volley blocked by a Cardiff player. At the other end Mason was causing Leeds problems ably assisted by the sweet left foot of Whittingham. Cardiff tried the same corner routine that they scored the goal from and again two Cardiff players were left free at the back post. Again Silvestri went ballistic as I shook my head off it's socket in despair. The game meandered to half time with the scores level at 1.1. Not the most memorable 45 minutes football I'll ever watch but pleasing to see Phillips score his first goal. If anything the first half was won by the wind as both teams struggled to cope with blustery gusts whipping through Elland Road.

Murphy had the first shot of the 2nd half as he tried to volley a looping swirling ball from 20 yards. I'll not describe the result to save him any embarrassment. Leeds withstood some Cardiff pressure just before the hour when they successfully defended consecutive corners. Maybe they had learnt from their mistakes in the first half? Well no because on 62 minutes Gunnarsson benefited from the exact same routine from the first goal and stabbed the ball home from close range. Jesus H Christ do we ever learn. Even your average Sunday League defence could work out what Cardiff were doing. 2.1 Cardiff and suddenly I was wishing for the season to end there and then. The 4 celebrating Cardiff fans kept the 20 stewards and Police on their toes as they got out their seats and clapped vigorously.

The rest of the game followed a pattern seen far too often at Elland Road in recent years as the home side seemed incapable of putting up any further resistance to a very average, ie poor, Cardiff side. Joe Mason and Whittingham were allowed the freedom of the park to steer the Bluebirds home to yet another win against Leeds United. The final whistle went and the rapturous applause of the 4 Cardiff fans was drowned out by frustrated boos from all corners of Elland Road. A shocking 2nd half performance from Leeds.

They weren't any smiling faces as we headed for the car after the third defeat on the trot in which we have conceded 9 goals. When did Steve Thompson leave? Redfearn has got a daunting task in the last few games on the evidence of this last week. The only positive from today's game was Phillips who showed some nice touches and good adaptation to the pace of the championship. Bamba wasn't up to his usual standard whilst Bellusci was his usual mix of brilliant defender one minute to bum clenching liability the next topping it off a ludicrous challenge that earned him a yellow card. The grittiness that we've seen this year was missing today but the Leeds achilles heal, the lack of a decent striker, was all too apparent in this game. Antenucci struggles in a 4:5:1 formation but who else have we got? Morison..................errrrr no, Sharp again not suited. I'll be fascinated who he starts with against high flying Norwich on Tuesday. One thing is for sure if we play the same against the Canaries they will be singing all the way back to Norfolk with three precious points and a much improved goal difference.


Posted by Andrew Butterwick at 20:04