It's Saturday and somehow this fixture is kicking off at 3pm so all was well with the world on Planet Leeds. Well apart from the usual self flagellation that every transfer window brings to the majority of long suffering Leeds fans and the outcry over the ridiculously late change to the date of the Boro match. Even more ridiculous are the calls to boycott the match in my opinion. We're fans...........going to matches to watch football is what we do.........yes protest against the creeping disregard to all loyal fans of the game but don't stop going to games. That's just daft. 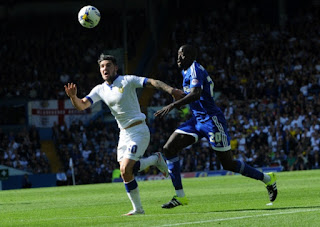 Bristol City were in town today for a clash that Leeds will be looking to profit from after two disappointing defeats have seen the good ship Leeds lurch ever so slightly towards the Bermuda triangle of the championship relegation mire. New signing Toumani Diagouraga had still to complete his move from Brentford so Steve Evans had the same squad plus Chris Wood available from the one he had at Hillsborough. Interestingly Steve Evans has compared our new signing to Patrick Vierra? Well he's the same height and colour but if he's half the player Vierra was then we're onto a winner.

Most of the pre match debate was about how the hell you pronounce the new lad's name that is until the team news filtered through. Evans had picked an unchanged side with Wood on the bench. The majority of fans in my earshot were expecting Wood to come straight back in and an attacking 4-4-2 formation against a team lurking in the relegation bear pit. Evans rather conservative selection dampened the mood somewhat as the game got under way in front of 20,000 category A fans.

I am now going to skip straight to half time as the first 45 minutes was nothing short of dreadful. So much so that any fans who hadn't dosed off booed the team straight back down the tunnel. There was no tempo, no direction and definitely no quality in anything Leeds did. Bristol weren't much better although the illusive forward Kodjia did catch the eye with his gangly  awkward style. HT report: Utter mind numbing dross! There were better highlights during half time though as a fan flicked the fingers at the Pie Cam and the fan who was circling the ball ten times before attempting a penalty showed more composure on the ball than the entire Leeds team as he drunkenly fired the ball home. It was that bad that the urinal philosophers were actually lost for words.

The 2nd half couldn't be any worse I told myself as I trudged back to my seat. Mmmm well at first it was as despite Mr Evans' half time rant Leeds continued to find it difficult to string any sequence of decent passes together. 10 minutes into the half Evans made the obvious substitution as Wood replaced the disappointing Carayol. Immediately the pace and tempo seemed to lift. Wood and Doukara formed a strange twosome up front with Cook now on the left wing as at last Leeds looked as if they might just want to score a goal. To do that they had to get a shot on target though something that up to now they had failed miserably to do.Then just before the hour there was a bright pin prick of light at the end of the Leeds United tunnel. 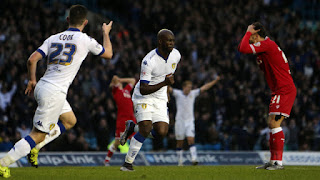 Wood combined well down the inside right channel linking with the hard working Dallas. Wood disappeared into the middle while the Northern Ireland man teased the Bristol defence............he swung a dangerous ball into the middle where Wood made his presence tell as he laid the ball off via his bollox into the path of Doukara who coolly side footed the ball beyond O'Donnell and into the City net. Get innnnn! and a huge sigh of relief shot around Elland Road. 1.0 Leeds. 30 minutes left for Leeds to go on and take the game away from the relegation strugglers.......well not exactly. Bristol, fresh from last week's defeat of Boro, were in no mood to lay down and die. They attacked with conviction sending shivers of apprehension around the old stadium. Pearce missed a header, Kodjia had his shot blocked before Flint missed a golden chance as his header flashed wide from just 7 yards. At the other end Antenucci, on for Doukara, squared up to a Bristol player as he tried to prevent a quick free kick. Leeds weren't exactly hanging on but they weren't killing the game off either.

Silvestri saved a late shot from Ayling before Leeds finished the game keeping Bristol in their own half. The ref blew for full time and Leeds had won a distinctly underwhelming 3 points. "We might have won but we were f****** shite" was one fan's opinion as we marched away from the ground. Dallas was the only player to show any real form today in what was a massively frustrating and poor performance from Leeds. Just one shot on target in the entire game against a team in the bottom three. Shocking. We might have won and kept a clean sheet but it certainly didn't feel like it as we made our way home. I'm just glad my head was still connected to my neck with the number of times I was shaking it through the match.

Not for the first time I've left Elland Road with an underwhelming feeling of sheer frustration with the goings on at the team I love. On this evidence it definitely won't be the last. Brentford away on Tuesday. Surely we'll perform better there won't we?

PS Unfortunately work commitments dictate I won't be at Griffin Park but I will be blogging again after the Fa Cup game at Bolton
Posted by Andrew Butterwick at 18:48