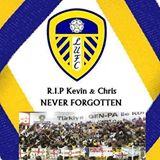 Two back to back sobering defeats for Leeds have left an indelible mark of the current status of this once great club that has only added to the depression submerging even the most optimistic followers of the mighty whites. Floundering in mid table championship oblivion is just reward for the latest in a long line of dubious owner's attempts to run our club. The sad state of Leeds United is even more poignant on the 16th anniversary of the murder of the two fans, Kevin Speight and Christoper Loftus, who followed Leeds to Galatasaray and never returned.

As ever on the anniversary of the murders Elland Road was awash with heartfelt and passionate tributes from the Leeds United family as I joined the remaining loyal fans prepared to witness first hand the clash with QPR. The West London side, now led by former Leeds hero Hasselbaink, have had their own problems this season but I was struggling to see how a team that were so embarrassingly inept on their last two outings could get anything from this end of season game? Steve Evans team selection and tactics have become more unfathomable the longer the season has gone on so as usual we had a game of trying to guess tonight's concoction from the under pressure Head Coach would be. Bellusci dropped? Any wingers starting? What about Liam Cooper?

Well when the team news filtered through there were 5 changes from the starting 11 at Rotherham. Young Bailey Peacock-Farrell replaced the suspended Silvestri along with returns for Dallas, Murphy, Cooper and Carayol. Bellusci surprisingly kept his place despite his horrendous error against the Millers. So what appeared to be a 4-1-4-1 formation was the plan for tonight with Wood ploughing a lone furrow up front. After a poignant one minute's silence in memory of the two murdered fans the game was under way. The first 20 minutes were instantly forgettable as both teams enjoyed spells of benign mediocrity befitting of their league position. Dallas got a shot away that Smithies dealt with and the dangerous Mackie got himself injured and had to limp off. The home crowd gave Peacock-Farrell an encouraging ovation as he took up his position in front of the kop.

The game meandered along at a soporific pace with Leeds having the better of the possession but failing to put Smithies under any real pressure in the QPR goal other than a low shot from Carayol whilst at the other end Hoilett caused flutters of concern in the home defence from time to time. Mmmm were some of the players already looking ahead to their end of season holiday in the sun? Half time came with the game goalless and those in the crowd who started early at work this morning struggling to stay awake. As you can imagine the urinal philosophers weren't overly impressed. "What's the point in having wingers if there's only one player in the box when the crosses come in?" one fan complained whilst another was more blunt in his assessment "Lot's of possession but f*** all at the end of it again"

The 17,000 crowd settled down to "enjoy" the 2nd half. Things did brighten up a shade as the 2nd period began as both teams woke up to the fact that they might be able to actually win the game. Swift passing released Dallas in the QPR box but his drilled shot deflected wide for a corner quickly followed by Murphy finishing off another decent Leeds move by testing Smithies from the edge of the box. QPR responded with their own attacks. Polter should have hit the target with a header and Hoilet and Philips had shots that the young Leeds keeper dealt with well.  The game still had 0-0 imprinted on it though but with twenty minutes to go the deadlock was broken with a lovely bit of skill from Murphy. The inconsistent Leeds midfielder was having one of his better games which he topped off with an exquisite chip over the QPR defenders into the path of Wood who for once timed his run into the box perfectly and steered the ball past the helpless Smithies. 1-0 Leeds and 20 minutes to go. Could Leeds close the game out effectively?

The euphoria of the goal lifted the home crowd as Leeds looked to pick up a precious three points in front of their own supporters. Leeds made tactical changes as Diagouraga and Coyle replaced Murphy and Dallas as Evans looked to shore up the creaking Leeds defences ready for the QPR final assault. All seemed to be going well as the West London side struggled to open up the home defence............that is until Bellusci reprised his late, late cock up on Saturday with another inexplicable error. Polter pushed the ball past the Italian defender towards the bye line and to my horror Bellusci's reaction was to bundle him over for a penalty. FFS not again. There were just 3 minutes left. Cherry stepped up and dispatched an unstoppable shot past Peacock-Farrel to level the scores at 1-1.

The final minutes contained lot's of huffing and puffing resulting in a stinging shot that Smithies could only parry into the path of Wood who hammered the rebound straight at the keeper although he was offside. The game finished 1-1  with the majority of fans skulking away with the bitter taste of late defensive errors still very much in their mouths. In the end this was not the most entertaining game between two very average sides.What was Bellusci doing to give that penalty away? Not sure that even he could answer that?

So we soldier onto Burnley on Saturday with the hope the home side have a really bad off day.......oh and we don't give away any free gifts!

Posted by Andrew Butterwick at 23:29