Today's match track
Another early start is needed as yet again the kick off is moved to midday by police request.  Undaunted the Happy Chocker and the Quiet One pick me up before the milkman has had chance to deliver the daily pinta for the short trip to the train station.
As we board the train at York, along with a good number of bleary eyed White's fans, the reassuring sound of the first can of the day opening lifts spirits.  It's not long before there is a buzz of pre match chatter in the carriage and more Leeds fans join the train at each of the stops all the way to Newcastle.
All change at Newcastle and a chance for examination of our chances against the blues of Carlisle.  A straw poll on the station platform, now full of fellow fans awaiting the "Hadrians Wall" train to Carlisle, favours taking a draw but the ever optimistic yours truly is backing a Leeds win 3.1.

It's here we meet up with the "Darlo Whites" (pictured right) and after swapping pleasantries and another "We'll take a draw" conversation.  I begin to think I'm the only one on the train who thinks we are going to win...............but the Quiet One pipes up with a 2:0 prediction with Becchio and Beckford scoring. His Dad decides to put his money where his sons mouth is and backs Becchio for the first Goal..........kerchang!!!!!
As the day develops into bright sunshine to accompany field after field of sheep on the journey to Carlisle I strike up a conversation with a Leeds fan who got on at Newcastle.  Having endured 3 years of hell in his adopted town due to his sensible football allegiance he was now getting some of his own back as the Toon hits the self destruct button.  He's also got a spare ticket (for the Carlisle end) that he has arranged to sell to a 6ft 3" 25 stone fan he's meeting at Carlisle station........now if your gonna pick a minder to accompany you into the enemy end he seems the right size and presence to me! 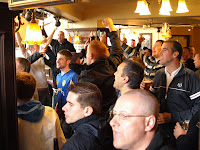 On arrival at Carlisle we are met by the boys in blue who seem to want to take every ones photo before  searching each and everyone for.....I'm not sure but we humour them before being directed into the nearest pub.
Now to say that atmosphere was already cranked up when we got there is an understatement as despite the early kick off those pesky Leeds fans had managed to drink the same amount of alcohol as they do for a normal KO..........the only difference is that it's only 10.45am.   So all the old favourite songs were aired (including unfortunately that Munich one!) on an unsuspecting Carlisle town centre.  The Police eventually closed the bar to entice us out and enable them to coral all the white hordes for the march down to the ground. 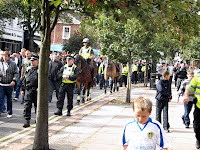 A textbook operation followed as they shooed and badgered us along..........unfortunately it felt like they had used Phil Drabble's "One Man and his Dog" book for the basis of their tactics!
Rui had deservedly kept his place and Aiden White deservedly took Alan Sheehans' shirt....other than that the team was as before leaving on the bench Casper, Robbo, Howson, Snoddy & Jesus which just shows the squad strength we have this year.
Leeds' fans had been allocated the terrace behind the goal together with part of the adjacent stand, similar to last weeks situation at Swindon, and as ever the passion and volume increased to a crescendo as kick off came
and went and the game settled into a first 15 minutes of tentative sparring.  Leeds gradually took control with their now trademark passing game, yes Mr Wise I said passing game ie good to watch, and with the defence looking solid things were looking good. 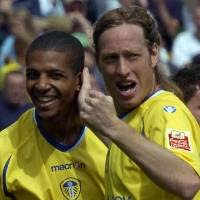 The only slight blip was as The Happy Chocker succumbed to the early morning cans and had to visit the gents.................regular readers will know that  this usually is the cue for a goal to the opposition........the tension was almost unbearable as everyone around me held their breath as HC dashed out to the back and the relief that met his return, with the game still at 0:0, matched his relief at loosing at least three cans worth!
Leeds pressure and control finally told after 30 minutes when the exquisite Telfer knocked the ball back across the box for "Our Argie" to poke home the opener, and in doing so win the Quiet one £30, signalling mass celebration in the stands.  The guy in front of me celebrated that much, oiled by a not insignificant amount of amber nectar, that he fell over the seats in front landing with his ribs across the seat..............ouch!  Half time came with Leeds still 1.0 up and cruising. 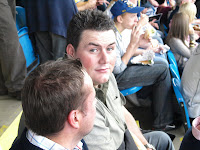 The Happy Chocker found himself sat next to a Scottish fan who turned out to be Snoddgrass' best mate, with his free tickets, together with his attractive wife.  Not sure if it was the Snoddy connection or the pleasingly aesthetic wife but he was deep in conversation throughout the whole of the HT interval!
As the game progressed through the 2nd half our new found confidence in the team was starting to fray slightly as Carlisle threw men forward to try and retrieve the game, resulting in a 10 min purple patch in which solid defending was the order of the day for the Leeds back 4.

This however left them exposed at the back and with fresh Leeds legs in the shape of Howson and Snoddy on the pitch it wasn't long before Beckford sealed the game with a well taken finish from a pin point pass from Snoddy.  So the whistle blew on another impressive away win for the mighty whites and the celebrations in the Leeds end were as joyous as ever, culminating again in the playful taunting between the two sets of whites fans as we were "kept in for our own safety" after the match.
After a heavy handed police operation to march us back to the station, (whistle...whistle...cum by shep.... ) we were herded onto the waiting special to whisk us back to Leeds.  On the train the combination of an early morning start and alcohol ensured that the vast majority were in the land of nod before we were outside Carlisle.  On reflection though it was another very impressive performance founded on the control exerted by our excellent midfield of Delph, Killa, Dougie and the ever willing Hughes together with a solid defensive display lead by Telfer.  As ever we looked dangerous up front with the double Bex pairing causing the usual havoc.  Special mention this week for Neil Kilkenny though as his incessant prompting and badgering of his colleagues coupled with his willingness to receive the ball and distribute it incisively made him my MOM, and therefore inspiring the match track.
Another perfect away day was capped with getting home in time for me to make it to Gillian's 50th birthday bash thus earning valuable brownie points from the present Mrs Marching on Together.......................it's all going too well!
MOT
Posted by Andrew Butterwick at 19:22