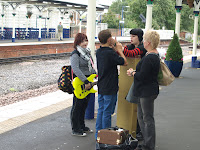 the Happy Chocker and the Quiet One at the station full of optimism and confidence buoyed by the last two performances and the fact that Crewe are not the strongest side in the league. Whilst debating the selection headache for Macca on the platform I notice Selby's answer to Amy Winehouse waiting to board the same train along with her entourage.The buzz of expectancy amongst the whites fans on the very slow train
to Leeds is noticeable and once in Leeds we tread the well worn route to the members bar at ER via the shuttle bus. 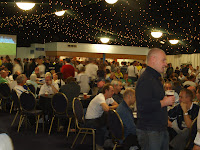 Score predictions reflect the positive vibes around the place with 5.1, 3.0 & 4.1 chosen by our motley crew.  After picking up my winnings from JB's opening goal last week we listened to the team for today.
I've got to give credit to Macca for he is not afraid to ring the changes and certainly leaving Robbo on the bench along with Howson & Snodgrass thus sacrificing our new found width seemed a strange decision and had one or two people puzzled in the bar.
He also chose to drop Hunty and Rui in favour of Telfer and Lubo at the back to try and shore up a decidely leak defence.
However once the match started it soon became apparent that Macca had got it spot on as with young Delph and Kilkenny
bossing midfield we started on the front foot and  the only surprise was that we had to wait until 25 minutes before we scored, a cracking goal from Delph. 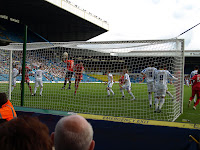 This set the tone for the afternoon as soon after Sheehan hit an even better shot to make it two nil and we were coasting.
The defence was solid and Lucas was having another good game.
We went in 2.0 up and it was obvious that the only question in the 2nd half was going to be how many...................and so it proved as first Dougie made it 3 before Beckford capped of yet another exquisite move with a firm header into the net.
Subs had been made and Robbo & Howson had come on and actually improved the quality of the play............we were purring and when our favourite Pukka Pie man netted the 5th it was all too perfect. 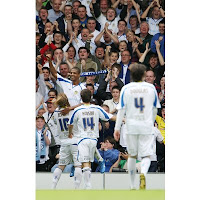 The Crewe fans that were left in the cheese wedge were doing the Conga to keep themselves amused...sun was beating down from a blue sky and everything was just peachy  But as I should knowLeeds don't do perfect and as the game went into injury time we managed to get one man sent off and concede 2 goals in the last minute!
The atmosphere on the way home was oh so different from last week...........Jason & Denby were on the train with their assorted gang figuring out how to raise enough money to go to the upcoming away matches........Crafty did a very good impression of a character from the Simpsons............and generally the view was this was the real start of the season and we can look forward to a successful season watching attractive football from the mighty whites.  The only problem on the horizon would seem to be if we can hold onto the likes of Delph, Becchio, Beckford et al  when the transfer window opens again.
So hats off to Macca for getting his selection right and therefore todays "match track" is a tribute to him.   Also hats off to the team for a very impressive performance.  Things are looking good!  Roll on next Saturday and another long away day at Swindon.  Can't wait
MOT
Posted by Andrew Butterwick at 18:31