Another Saturday dawns with the sun cracking the pavements in god's county and yours truly full of optimism regarding the this afternoons match with the bulls from Hereford, I'm trying not to think about last years efforts against the "bottom" teams though.

We have the added spice this morning with the draw for the next round of the Carling Cup and just who we will get.The continuing Toon saga just gets better...........this weeks diabolical performances on the field have been compounded by appointing Joe Kinnear as an interim manager.........god knows what the players make of it but it occurred to me that there is a spooky resemblance between Keegan and Kinnear...........  Just time to see the Carling Cup draw, Brighton or Derby away ffs, before The Happy Chocker picks me up for the well worn route to ER.  We've again got the pleasure of Monkey Hanger's company today and it's not long before we're debating the pros and cons of today's game on the packed train into Leeds.  Once there MH decides to explain to the bus driver parked across the pelican crossing, section 4 of the highway code, somehow don't think he was that impressed though.Once at ER I chose the sanctuary of the members bar rather than the massive queue for the new away shirt.  So after enjoying a couple of pints and watching Liverpool beat Everton we make our way to our seats in the kop. 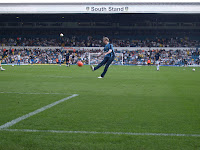 The match starts in glorious sunshine and with Macca perservering with the ever improving Aiden White at Left back and including Robbo in an attacking midfield I wasn't alone in expecting a goal feast.  The first half comes and goes with Leeds dominating but not really hitting top gear.  Young Steptoe and his band of stewards add to our frustration by consistently whining in our ears every time someone gets to their feet.
The half time crossbar challenge features "Luke from Pontefract" who was sat behind me with his mates.  Obviously the nerves of playing on the hallowed turf got to him as he makes a complete arse of all three shots.............poor lad!
Leeds step it up a gear in the 2nd half and surely a goal must come as Beckford, Becchio and Robbo all go close with the kop baying for blood.

Eventually the Pukka Pieman brings home the bacon with a headed goal after a goalmouth scramble and we settle back for the inevitable goal rush...............only it never came as more chances went begging.  Hereford even pushed forward in the hope of snatching a point but it was not to be.  So we continue our march up the league at the expense of a Hereford and everyone goes home happy.
A good crowd inside ER today of 25k plus which just goes to show that if Capt Birdseye drops the match day prices then more fans will come through the turnstiles..................but I'm not gonna hold my breath.  Next up are the mighty Posh with another high noon showdown on Saturday.
Can't wait.
MOT
Posted by Andrew Butterwick at 10:53