Swindon away:
The morning starts with the bright sunny weather matching my optimism and general positive feeling about the day ahead, buoyed by our progressively improving form and confidence on the pitch.  The Happy Chocker and son pick me up early and another early morning start to follow the mighty whites across country is under way.
A group of discreet Hull fans, on their way to the latest episode of the Newcastle farce,
are trying to look inconspicuous on the train into Leeds.
This is in contrast to other Hull fans we will meet later in the day but more of that later....................
The journey down to London was largely uneventful and once we had made our way to Paddington to catch the connection to Swindon we had time to reflect on the game.
Fabian Delph was fantastic last week.....can he build on that performance? 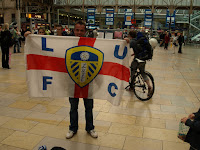 Can we keep hold of him once the transfer window opens if he does?
Whatever let's enjoy him teasing and bamboozling the opposition in the meantime.  Other fans on their way to matches scurry across the platform as we unfurl the Leeds flag for a photo opportunity.
As we ponder we meet a lone Leeds fan from Leyton catching the same connection, Darlo Ratman, and the match chatter goes up a notch. 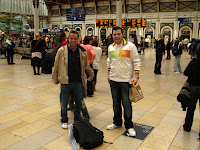 As we board the train, exchanging Leeds salutes with other fans migrating to the Swindon train like bees round a honey pot,
the pre match nerves start to grow so once ensconced in our seats we treat ourselves to another can............just to calm the nerves you understand, actually we did quite a bit of nerve calming over the next hour.  Once we got to Swindon we were directed to our allocated pub in the town centre, where a big police presence was trying to keep not only the Swindon fans away from the heathen hordes from the north, but also the Manure and Scouser fans (watching the noon showdown at Anfield in the pubs) in their own little pubs.  Funny thing though even though they were far from their North west roots they all seemed to have strong South west accents, glory hunting tossers!
This was a good opportunity though for some Manure winding up we were not expecting and a rendition of WACCOE was soon drifting round Swindon town centre.
The policeman kindly escorted us from the pub to the ground  to make sure we didn't get lost through the increasingly hot September sunshine.
We found ourselves seated next to the "Wakefield warriors" we met at the Yeovil game who had endured the coach journey from West Yorks.
The only change to last weeks winning team was Rui for the suspended Lubo in front of Hunty as Leeds took to the field wearing their new blue & black away strip.  A scrappy first 10 minutes was brought to life by Sheehan's red card lunge drawing instant condemnation for the referee, Mr Deadman, from the huge Leeds following.  From my vantage point the decision looked harsh especially so early in the game but without the benefit of TV replay it was difficult to say.............what is evident is our Irish left backs tendency to get drawn into rash challenges and not for the first time he left the rest of his team mates with an up hill struggle for the rest of the match. For me that was the start of a poor performance from the ref who continued to litter the match with yellow cards like confetti at a wedding.  One thing is for sure if had ventured into the Stratton Bank, housing the baying Leeds fans, he would have lived up to his name. 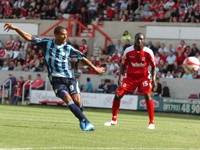 The sending off seemed to galvanise Leeds though and Macca boldly reorganising leaving two up front and moving the ever willing Hughes to left back.
It was not long before Leeds were in front after a clinical Beckford finish after the first of two defensive howlers that would cost Swindon dear and give their manager recurring nightmares.
Thereafter Leeds controlled the game other than the probing of their tricky left winger giving Capt Chaos the run around and bang on half time yet he was able to deliver a perfect ball for Cox to equalise. 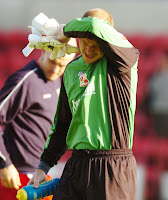 Now I enjoy celebrating goals as much as the next man but I have never understood the mentality of players who delibrately celebrate at the opposing fans, especially in Div 3 ffs, so the inevitable yellow card Cox got for gesturing to the Stratton Bank went a little way to offset the disappointment of conceding a goal.
HT came and the chatter around me seemed to settle on the "I'll take a draw now" view............I was more optimistic and was proved right as Leeds again took control of the game even with 10 men.
When an innocuous free kick from the industrious Kilkenny was inexplicably dropped by their keeper, a la Gary Sprake, Leeds were strolling and Manager Malpass' blood pressure went through the
roof!  Cue "2:1 it's your keepers' fault" raining down on the unfortunate man between the sticks. 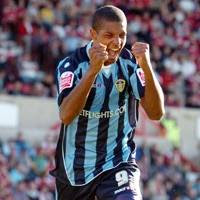 The belief was now surging through both the team and massed fans and Swindon visibly faded.  Lucas pulled off an astounding save from apoint blank header and when Beckford converted the third of his gilt edged chances created by the ever improving midfield we were home and dry.  It's at times like this that it's a pleasure supporting Leeds.  We like nothing better than winning through adversity, ( minus 15 et al) so it was inevitable that chants of "we've only got 10 men" and "We're going up as f****** champions" reverberated around a County Ground fast emptying of home support.
As the whistle blew and we celebrated in the stands the now traditional baiting of the two different stands of Leeds fans took place with excited vigour, "You're only here to watch the Leeds" the Arkell Stand whites sang gleefully at their peers on the Stratton Bank who responded with a lusty chorus of"You're not famous anymore" and so on.  The Leeds team came back onto the pitch to a rapturous reception.  Eventually we left the ground with an expectant buzz of anticipation of what is to come this season.
On the train back to Paddington we soaked up the reality of another good win and met our South London friend from the Yeovil match (thanks for the nice words about the blog) on the way to the buffet for another celebratory can.
The journey back was a tiring one.  At Doncaster a number of suited and booted race goers fresh from a day at The St Leger boarded and a successful Leeds supporting punter sat down next to me to get the low down on the score, match etc.
What was a perfect day was nearly spoiled as we wearily boarded our final leg of the journey.  As ever on a Saturday night  you have a mixture of eager revellers on their way to and from a night out and bedraggled football fans on their way home.  On the final leg we had a group of four revellers, all Leeds fans, who again we were in conversation with when a group of boisterous Hull City fans got on inebriated by their success at the toon.  They were joined by two or three toon fans on their way back to Hull together with a whites fan from Hull.  This potentially explosive mixture was fueled by the usual football banter but as is all too often the case the banter took a more vicious turn due to a "gobby full of himself we're in the prem you're not fish f****** twat" Hull fan who couldn't put a sentence together without leaving the words Leeds scum out.  Selby station came just in time as The Happy Chocker started to think I was going to explode and fillet the aforementioned nobhead.
So the end of a beautiful day.............roll on Carlisle away next week.
Can't wait.
MOT

Posted by Andrew Butterwick at 09:20