A biting cold wind greets the large contingent of whites fans as they descend on Selby station for the early morning trek to Peterboro.  The Happy Chocker is without The Quiet One today but Monkey Hanger's nephew has come off the sub's bench to take his place and we are also joined by Jason and Denby making one of their rationed away trips.
After changing at Donny we join a packed train full of generally optimistic Leeds fans hoping that we can extend our 6 match winning run at the expense of The Posh of Peterboro.............then disaster strikes as Monkey Hanger's nephew utters the fateful words "We'll go top if we win today" ................... and that's it the curse of "wishing" Leeds to the top of the table is well and truly set!
The only good thing is that he's still young enough to learn that following Leeds can be a burden at times and one should never take them for granted because that's when they will disappoint you.
When we get to Peterboro we are met by a strange police operation.  Lot's of them about but they all seem a bit uncertain what to do.........none of the herding tactics as seen at Carlisle and Swindon neither have they allocated a specific Pub for us so we wander into town to find a suitable hostelry to quaff a couple of pre match pints. 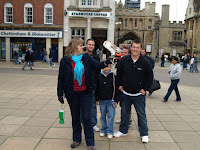 On the way we run into The Exotic Pet Company, collecting for charity, for the chance to take a photo with an exotic pet, so never one to miss an opportunity for a good snap I get the rest of the gang ready and out comes the pet....an Owl?  No I don't know about you but I think they
must lead sheltered lives in Peterboro if an Owl passes as an exotic pet.
The town was fast filling with the 4000+ Leeds fans and with it the atmosphere.
The walk from the pub to the ground was interupted by Denby nipping into M&S to relieve himself of the last pint while Jason went in as minder..........as we waited a busker saw an opportunity to charm all the football fans passing by so he quickly changed his tune to ......Abide with me?  nice try "You're fired" 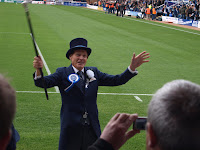 When we get to the ground the atmosphere ramped up several notches as the benefits of standing on terraces behind the goals come flooding back and what would be the best performance of the season so far by the Leeds fans began.  There was plenty of ammunition for the Elland Road songsters with tunes goading Fergies son regarding everything from his Dad to his less than gentlemanly treatment of his wife together with a full array of all the favourites sung and then to finish off the playful taunting of each of the stands packed with Leeds fans..........
and this was before a ball was kicked.  We even had Mr Posh come and entertain us....bless him.
So to the match and everyone was surprised when Casper appeared in goal after Lucas was injured in the pre match warm up.  Leeds dominated the first half with their possession football without ever seriously testing the big goalie, Lewis, and George Boyd showed why he's been getting rave reviews of late.  Half time came and went and when the game resumed Posh snatched the lead with a goal scored after a blues player had controlled the ball with his hand mysteriously not seen by the ref.  Leeds upped the ante but it was to be an afternoon of frustration for the fans as we were let down time and again by the final pass/shot. 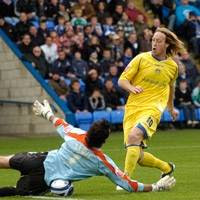 Becchio finally got the ball in the net only to have it disallowed for offside, another apparently dubious decision by the officials.  A bad day got worse when their lanky winger set of on a mazy run culminating in a second killer goal in the 85th minute and the game was over.
So our run of straight wins comes to an end with the Leeds fans still singing their hearts out right to the end..........at least we impressed in that department as a passing Posh fan commented on the way back to the train "You've got the most loyal fans in the country mate" and that we have but it doesn't get us 3 points though.
Not a good day but we're in a marathon not a sprint as The Happy Chocker would say.  Monkey Hanger's nephew enjoyed his first away day and we now look forward to Wed and the JPT tie at The Don Valley v Rotherham (Binoculars required).
MOT
Posted by Andrew Butterwick at 17:31

LMAO at the Leeds end singing to Mr Posh while he conducted them with his cane! Great day out, bad result.

Witteringwhite:
Yes great atmosphere just a pity about the result........but it seems to have set a trend for Oct!