Match Track:
As we had been unable to hammer home our territorial advantage in the first game at Elland Road the Happy Chocker and I together with two other Chockers from Big K found ourselves heading down the M1 in the late afternoon to see the conclusion of our 1st round tie.

The possibility of the dreaded penalty shoot out looming if we didn't manage to settle the tie in 120 minutes sent a shiver of trepidation through the car.Arriving in good time in at Sixfields, Northampton's new home, we parked in the inevitable retail park and found a welcoming bar in the local Ten Pin bowling alley for our pre match refreshment and final discussion.
Now Sixfields is not the biggest new stadium in the UK, capacity 7300, but it does have a simialr look and feel to most of the stadiums that have sprung up in the last 10 years..........................I know the FA have strict criteria that clubs have to satisfy for grounds to be accepted but I now firmly believe that the FA must have introduced a caveat that there must be one of the following restaurants, Pizza Hut, Frankie & Bennies, MacDonalds or Bella Italia within 1/2 mile of the ground.  Suits me though as the car parking is free.
After a few games of Pool (go on ask who won) we trudged down the hill to take our places behind the goal together with a healthy number of fellow whites fans and a pitiful turn out from the Cobblers.  I think it's fair to say that we all a tad apprehensive after Saturdays reverse and weeks of good possession Football that hasn't always delivered the right result.  Added to that the "Motty stat" Leeds haven't won an FA Cup match since 2003 and the nerves were jangling as we kicked off.  It didn't help to have Mr Doom & Gloom stood behind us (everybody's rubbish and can't play football) loudly voicing his opinions from the first minute.
The Happy Chocker spoke for a number of irritated Leeds fans around us when he advised Mr Doom & Gloom to go forth and multiply after he had castigated the debutant Malcolm Christie for having a "rubbish touch and your a complete waste of time" after his first touch in competitive football for 18 months...........you get the picture. 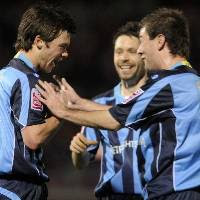 Leeds started with Christie and Beckford up front with Delph left on the bench to rest his legs ready for his U21 debut.
We got an early goal , no more than we deserved, through an exsquiste clearance (Ave it) from Lubo a touch on from Jesus and there was Jermaine to lay all his recent frustrations in front of goal to rest with an unstoppable drive. That was the catalyst for a stunning 1st half display that saw us go for the HT orange 4:1 up with Howson and Parker adding to the early strike before we allowed the Cobblers a goal back, it wouldn't be Leeds if we didn't, and then Beckford fired in his 2nd right on HT. 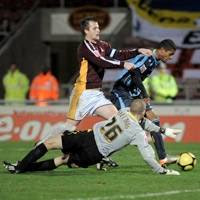 As ever the Leeds fans were in a boisterous and humorous mood.......those choosing to stay at home and watch on Setanta were reminded of their duty to watch live Football.  A noisy first half was finished off with a 15 minute rendition of "European Champions" over Half time with the accompanying dancing (TV cameras were there you realise)
Now for weeks I had been predicting that some team would get a good hiding with the quality of our Football and here we were witnessing the very thing, albeit against a decidely weak team.
When the supremely confident Beckford tucked away his third, he does like playing in front of the cameras, after a laser like pass from Killa and a finish that would have graced the Premier League it was time for the long suffering whites fans to start celebrating.  "Can we play you every week" reverberated round the ground......................if you're a Cobblers fan the answer to that is unfortunately yes as we will be back next week in the league.  As the Cobblers fans were understandably muted the two stands of Leeds fans swapped ironic songs at each other as each stand tried to out do each other.  On the pitch Leeds continued to dominate.............Christie was having an assured and classy debut if not a bit rusty..........the midfield were doing nicely without the precocious talents of Fabian......................and the defence were rock solid...........er well maybe not and in the final minute the slightly firm defence let another goal in from a corner but this couldn't detract from a pleasing ruthless display from Leeds  after Saturdays defeat.  The songsters turned there attention to Histon and the next round "Where the f*** is Histon na na na nah" and a few mischievous choruses of Wemberlee ended our evening at Sixfields.
As we made our way back to the car the locals were reflecting on how much they were looking forward to our return next week and how few resources they had.  "Your bench could have beaten us today" one perceptive Cobblers fan grumbled.
The post match chat with Adam Pope on Radio Leeds was up beat emphasising how pleasing it was to bounce back from Saturday's setback..................all's right with the world until the next caller started on a positive "We might of won but our defence is rubbish"...................just goes to show even winning 5:2 away from home you can't please all the people all of the time.
So after waiting 5 years tonight was the night for progessing in the FA Cup. On Saturday we play Hartlepool at home but before that I have to ponder the logistics of making Histon for a Sunday lunchtime KO.
Can't wait.
MOT
Northampton 2 v 5 Leeds

Posted by Andrew Butterwick at 07:49